Since I updated you on my January goals last week, I wanted to share my February goals with you. I actually looked back at my January goals post a number of times throughout the month to find out what I was supposed to be working on so it was useful to have it here on the blog.

Let me backtrack a bit here. Once I had written my January goals post, I started making a list of February goals as I ran across other things I wanted to get done. The day after I wrote this one down, a flyer came home from the kids' school. They are collecting clothes and shoes to be recycled as a fundraiser. WHAT!??!?! Check out this amazing organization here: www.bag2schoolfundraising.com

In Edmonton, we could do cloth recycling through the city. (We could recycle EVERYTHING in Edmonton -- it was awesome!) However here, we can't do anything with cloth but throw it out. If clothes are in good enough condition, we send them to the thrift store but jeans with holes in the butt, shoes with holes in the soles, underwear (I know some people who donate underwear but not me), etc, we just have to throw out. So I'm excited that I now have a garbage bag full of hole-ly clothes that will go to a better cause.

I feel like this is a bit of a cheat goal but I still need to take a close look at the kids' clothes to see if there are any others that need to go in the bag for the school.

2) Go through the play room.

About twice a year, we try to go through the playroom. We usually try to do it right after the holidays (Christmas/Channukah) as they bring an influx of new stuff, and then again in the summer. We didn't get to the playroom during the holidays and it's looking like a bit of a disaster. 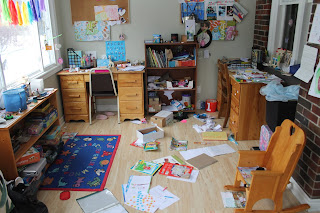 Yes, it's also messy in this picture but I think when there's less stuff in it,
it will be easier to keep a little cleaner.

3) Go through our room, especially my clothes.

If we're talking about going through rooms, I want to go through ours. It's not too bad but I do need to force myself to look through my clothes with a critical eye once in awhile. And it's been a bit too long since I've done this. Plus it will make one of my March goals a little easier. Ooooo -- the suspense :)

Yes, I still print out pictures on an annual basis. Since Rachel spent a lot of time in January going through all of our photo albums, it reminded me that I need to print out 2018 pictures. Also, it will help clean up my photos folder on my computer which will also help clear out my mind -- if that makes any sense. 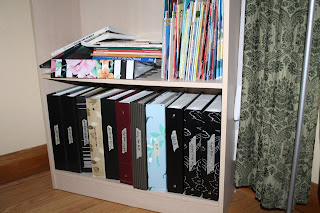 Our photo albums take up a whole shelf in our living room.

Sam's birthday is at the end of March which is coming sooner than I want to admit. I'd like to have a plan in place by the beginning of March, especially since we need to get his invitations out before March Break. 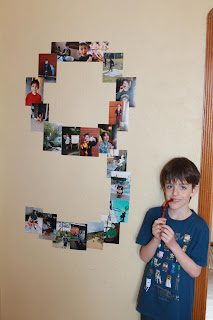 This is just a good life habit that I really suck at. Since I'm writing this post on February 3 and I haven't flossed yet, I can tell this one is going to be a challenge. Ha! Maybe I'll go floss after writing this post.

7) Get outside every day.

I'll be honest, when it's winter and cold and dark, I'd much rather curl up under a blanket and read then go outside. But I'm happier when I've been outside. So that's my goal -- spend a good amount of time outside every day -- no matter the weather. Emily has inspired me here :)

Speaking of Emily, and inspiration... I think you all know that Dave is Jewish, right? One of the important things in Judaism is marking the beginning of Shabbat (Friday night) with blessings over wine and challah and by lighting candles.

I've been buying frozen unbaked challah from a deli near us and baking it on Fridays. Emily started baking challah last year and sent me the recipe so, for February, I'm going to try and bake challah every Friday that we're home. Friday night was my first attempt and, thus far, I'm off to a good start. 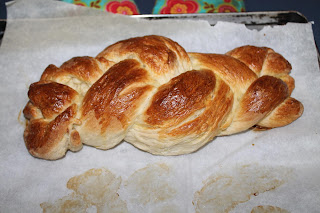