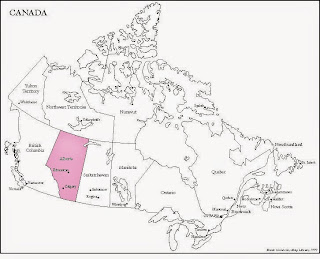 Alberta is the third province where I have spent a significant amount of time. I worked there (well, okay, just inside the British Columbia border, but my address was Alberta) for six months after my first year of university, and then Dave and I lived there for almost five years, while he was in grad school. It is where Sam and Rachel were both born, so needless to say, Alberta holds a special place in my heart.

Alberta is the third prairie province but it is also home to the Rocky Mountains on its western edge. The mountains make for an interesting phenomenon called a "chinook." These are warm winds which come down from the mountains. They can raise the temperature as much as 20C (36F) in one hour.

Another unique feature of the Alberta landscape is the Badlands. These are in southeastern Alberta and are a vast, dry land of caves and strange rock formations. Pictured below are the Badlands from when Dave, Sam, and I visited them in August 2009. 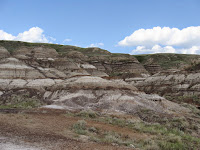 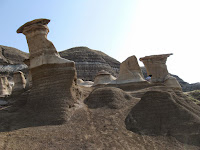 The Rocky Mountains are a defining feature of the province. Parts of the mountains have snow all year round. Banff National Park was Canada's first national park, and is famous for its hot springs, naturally heated by the earth. Below are Dave and I doing some Spring hiking in May 2008. 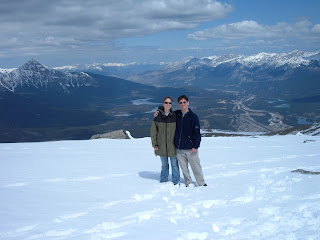 Alberta is Canada's wealthiest province, thanks mostly to "black gold," or oil. It has the most oil reserves in Canada and the second most in the world. About 300,000 people are employed in the oil industry and it brings in about half the province's money. These oil reserves are thanks to the stromatoporoid, an ancient dome-shaped, sponge-like creature which lived 590 to 248 million years ago. They grew by continually discharging a hard, calcium-based substance from their bodies. This substance formed hard huge reefs in the Bearpaw Sea. When the seas disappeared the reefs were buried deep underground. As the millions of years passed, the weight and heat of the Earth turned the remains of the reef creatures into oil. Craziness! 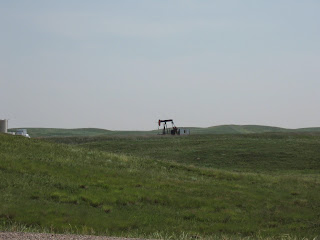 Alberta also produces about eighty percent of Canada's natural gas. It is sold to the rest of Canada and the United States. The oil and gas industries pay royalties to Alberta's government and that funds roads, schools, hospitals, the arts, and much more. 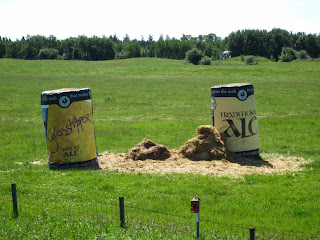 Given that over sixty percent of the province is covered in forest, that is also a large industry. And mostly thanks to the mountains, tourism is also huge. 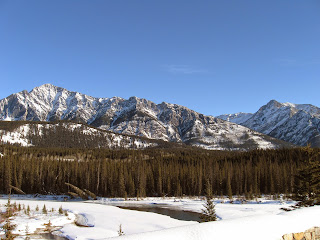 Seventy five million years ago, Alberta looked vastly different. Most of southern Alberta was covered by a large sea called the Bearpaw Sea and dinosaurs roamed the land. Today, Alberta is one of the best dinosaur fossil discovery places in the world. More than 35 different dinosaur species have been found in Alberta, including the Tyrannosaurus Rex! Alberta even has a couple of dinosaurs named after it -- the Albertosaurus sarcophagus -- a meat eating dinosaur which looked like a small T Rex, and the Triceratops albertensis.

The soft rock of the badlands is continuously being worn away which leads to new discoveries all the time. Since the 1800s, over 300 dinosaur skeletons have been found in Dinosaur Provincial Park. 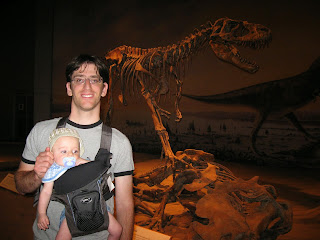 Aboriginal peoples have lived in Alberta for thousands of years. In the south, the Blackfoot Confederacy was the largest group. It consisted of the Siksika, Kainai, and Piikani nations. The Cree lived on the plains, leading a nomadic lifestyle, and living farther north were the Cree, Beaver, Slavey, and Chipewyan peoples.

European goods reached these people first, including horses which made their way up from Central America and the southern United States. Anthony Henday was the first European who recorded his travels to Alberta. He worked for the Hudson's Bay Company and reached Alberta in 1754.

Settling outside of the fur trading forts was discouraged by the trading companies, but when Canada took over Rupert's Land, renaming it the Northwest Territories, in the 1870s, they encouraged settlement. The Dominion Lands Act was passed in 1872 and offered 160-acre parcels of land for $10 each.

Since travel was difficult, the government of Canada hired the Pacific Railway Company to build a railway. The settlers in the north, near Fort Edmonton, were angry that the railway was built through the south, rather than closer to them, where more people lived.

As the settlements grew, the leaders of Canada realized the large parcel of land known as the Northwest Territories was getting too large to govern, so the province of Alberta was created in 1905. Edmonton was named as its capital. The government worked hard to encourage immigration and Americans, Ontarians, and Europeans, especially Germans and Ukrainians, were invited to move to Alberta. Once the railway was completed through to British Columbia, Chinese immigrants who had worked on it, also moved to Alberta to find jobs.

The Great Depression caused many problems in Alberta, especially when the price of wheat dropped from $1.27 per bushel to just 30 cents a bushel in four years. This loss of the economy, combined with a wide spread drought made for tough times.

However, in 1947, oil was discovered near Leduc, and many companies came to search for more. The business centre of the oil industry was situated in Calgary, a city in the south, while Edmonton, a little further north, became the centre of the oil-industry product manufacturing.

Half of all Albertans live in either Calgary or Edmonton. There are also smaller cities throughout the province. Some places, such as Banff and Jasper, are prized for their mountain location, while Fort McMurray is prized for its location in the oil sands. Edmonton, the capital, is well known for West Edmonton Mall, one of the world's largest shopping centres. (You can read about some of my and Dave's many experiences at the mall here.)

You may be familiar with Calgary, as it is known for hosting the 1988 Olympic Winter Games. Below are pictures of our visit to Canada Olympic Park with Alissa in June 2010. The Calgary Stampede is the world's largest outdoor rodeo. It's a ten day festival of rodeo events, parades, concerts, and festivities. Over a million people visit the Stampede every year. One of the most exciting and dangerous events is the chuckwagon race with a $500,000 prize. A chuckwagon is a covered wagon pulled by a team of four horses which carried food, the cookstove, and other equipment on cattle drives during the frontier days. 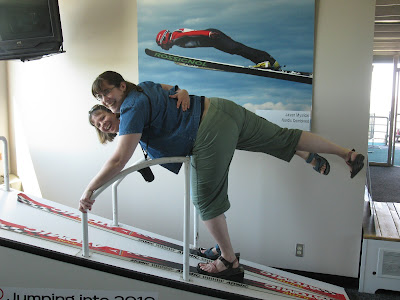 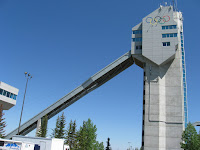 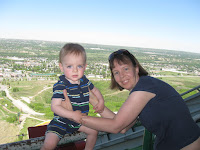 Many of Alberta's small towns have their own festivals and events. One of the better known ones is the Pysanka Festival in Vegreville. A pysanka is a Ukranian Easter Egg and Vegreville has the world's biggest one! 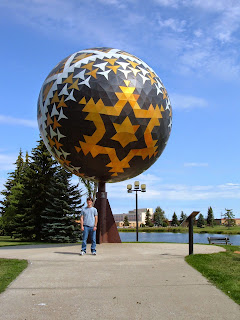 Alberta food is centred around beef, specifically steak! It was awesome living there as a vegetarian :) Sweet corn and potatoes are also important.

Canada's most famous women's rights activists all lived in Alberta. In the early 1900s they fought and won a legal battle to have women recognized as people under the law. Their names are Henrietta Muir Edwards, Nellie McClung, Louise McKinney, Emily Murphy, and Irene Parlby.

In Banff National Park, there are 24 wildlife crossings -- 22 underpasses and 2 overpasses -- which have been built to allow animals such as moose, elk, wolves, deer and grizzly bears to safely cross the Trans-Canada Highway. 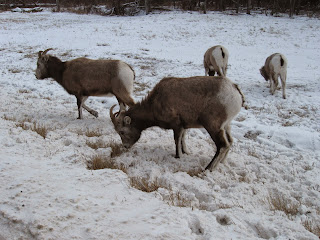 On May 5 of this year, Alberta elected their first non-Conservative provincial government since 1971. The New Democratic Party won an astounding majority. This was quite the shakeup. You can read more about it here.