The (Baden) hills are alive... with the sound of running

Dave here, jumping in for another guest post (two in less than a month! What is this blog coming to?). Unlike the annual birthday post, this temporary intrusion was entirely unplanned -- much like most of the morning, actually -- but wait, I'm getting ahead of myself here. Let me back up a little...

At the start of the year, Natasha and I both resolved to run a few 5K (just over 3 mile) races over the course of the year. While Natasha got an early start on her running goal, I waited until May to do my first run -- the Baden Road Race, which was on May 9th. Although there was an option to do a 7-mile run -- including a trek up to the highest point in southwestern Ontario -- I decided to stick with a distance I was reasonably sure I could finish.

There were two things that I liked about this race: one was that it went through a small town that was right beside the slightly larger town in which I grew up, and so it felt like it was on my "home turf". Also, it supported a few local charities, and was in memory of the father of someone I went to school with as a kid, so I appreciated that connection, as well.

Anyway, the plan for the day was that we would all wake up, get out of the house, and get to Baden in good time for the 9:30 start. I would then run the race, and Natasha and the kids would be waiting at the end to cheer me on. However, Sam woke up feeling sick, and the "is he sick or is he just starting the day slowly?" question was definitively answered when he threw up shortly before 9:00. This, of course, meant a quick change in plans, and after some hurried clean-up, I left the house with just enough time to get to the race. I arrived at the starting line around 9:25, did a few leg stretches, and it was off to the races!

The race itself was more of a slog than I had anticipated. Although the forecast had at one point called for rain, the morning ended up being quite warm, and the course was hillier than the city streets that I usually travel. I started the race with a fair bit of energy -- perhaps spiked by the "have to get there on time" adrenaline -- but by the end I was focused on just keeping moving, and staying ahead of the people who had slowed down to a walk!

One nice surprise was that I ran into (not literally :) a few friends from work who also decided to enter the race; although I couldn't keep up with them during the race itself, I hung out with them for a bit afterwards, and they took a picture of me afterwards, so you don't have to rely on my terrible selfie skills. 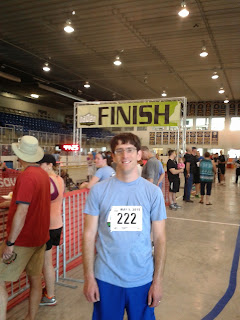 Here I am, glad to be finished the race! 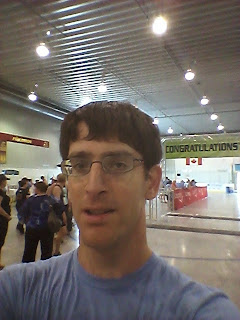 Did I mention the terrible selfie skills?


Oh, and as for the race itself, I was pretty happy with how I did, in the end. Sam was really hoping I'd come in first and win a prize, but I explained to him that I'm not actually a very fast runner, and that winning the race wasn't particularly likely. In fact, I ended up coming in 70th (out of 123, full results are here), with a time of just over 31:30 -- for me, that is pretty good, and is a definite improvement over the race I ran last fall.

Tune in tomorrow for a return to more recent life events, and stay tuned next week for our next running adventure -- our first chance to run a race together!
Posted by Dave at 09:55