A Little Before And After: Yard Work Edition

So even though our family has been sick, or recovering from being sick, for most of the past two weeks, there have been bright days here and there where everyone is feeling quite well. Saturday was one of those days.

I woke up bright and early to go get our winter tires taken off at Costco. I got there at 7:45 and was the first in line. Nope, they don't take appointments and yes, they are cheap, thus it is worth it. I drank my tea, read an entire book, and sat in my lawn chair. It was like a little mini vacation!

I was also shocked at all the people lining up forty minutes early to shop. Not to get a coveted tire spot, but to buy food. Who on earth goes to Costco early to line up to shop? And I checked and nothing amazing was being released. I hope I am never bored enough to become a Costco keener.

Now, I should add a small caveat here: For one of Sam's birthday parties, Dave and I did get to Costco about fifteen minutes before it opened on a Saturday because we were on a deadline for a party which started at 11, or so. So we needed to get in and out quick and get home to do other party stuff. But that is one of the only reasons I could justify lining up early. And I really hope none of you are Costco keeners and that I have now completely offended and alienated you. But if you are, could you please explain the mystery of your ways? Thanks!

Anyways, I was home in time for lunch, after doing a couple of other (not so) quick errands, and then we spent the afternoon outside doing some yard work. Our yard desperately needed some love and attention and we gave it some. Yay!

Before I share "before" and "after" photos, here are some "during" photos! 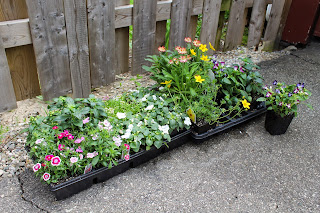 Plants waiting to be planted 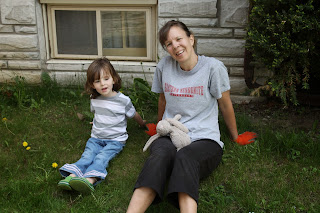 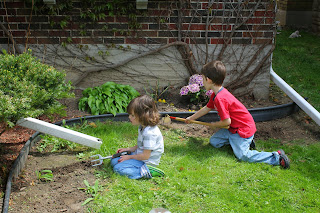 The kids wanted to dig somewhere and Dave and I told them they could dig up the hard packed dirt which used to be underneath two huge (out of control) bushes, and where, eventually, we want to plant grass seed. 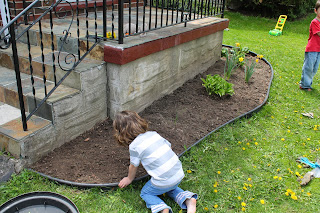 Rachel also did some (approved!) digging in the front bed. 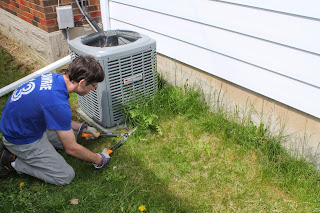 Dave trimmed all the grass along the side of the house! Yay!!! 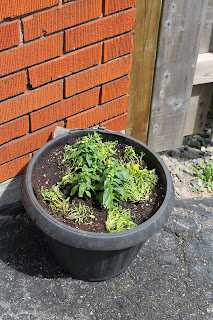 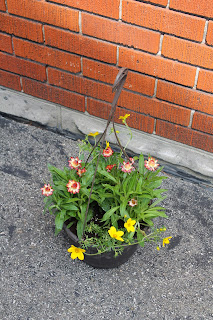 The planter on the left is yellow snapdragons and alyssum. The hanging basket on the right is strawflowers and biden. I can't wait to see how these fill out this summer. 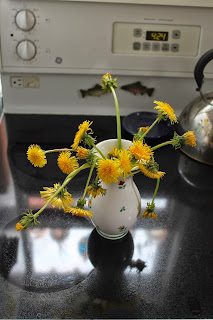 Rachel picked these dandelions for me for Mother's Day. I love them!

Here are some "before" and "after" photos for you, mostly because I need affirmation as to how much work we got done and you will be able to appreciate it more if you see how far it came!

It's a little hard to see in the picture, but on the right hand side, underneath the window, you will notice that that area was completely dominated by two green bushes. I think the people who lived here before us didn't pay much attention to the yard, and those bushes got quite large. A few weeks ago, Dave and I decided that we needed to trim them back. One of the them cut back quite nicely. The other one had about a foot of greenery and then was totally dead and brown inside, so we quickly decided to trim it down to the ground. 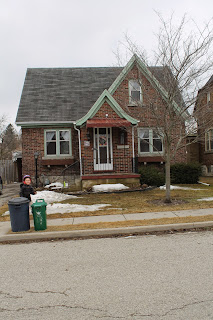 This bed isn't quite finished but here's a little "after" shot. The bush on the left is much nicer, and smaller. The bush on the right is gone. Dave sawed the rest of the trunk off on Saturday. There was already a hydrangea and a hosta in that area, between the two bushes, and I put two more hydrangeas in there. I will fill the rest in with annuals, but hopefully in a couple of years it will just be beautifully full of hydrangeas, which is much better than two crazy bushes. And the dirt in front of the beds is where the bushes were growing out to. We will plant grass and this whole area will look amazing. In about a year, or two :) 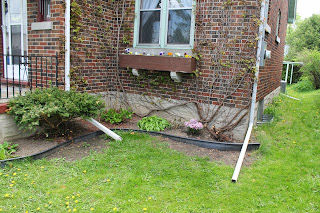 Side yard, before. All the grass alongside the house needed to be trimmed, which we can't do with the lawn mower. And since we rarely see this area, it's easy to forget about. 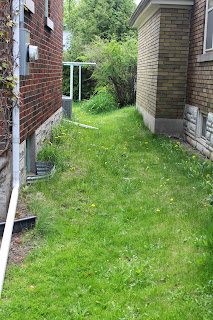 Side yard, after. Dave put a lot of hard work into this and it looks so much better now. We need to decide if we'll plant some grass seed along the side of the house or just the let the grass fill in naturally. 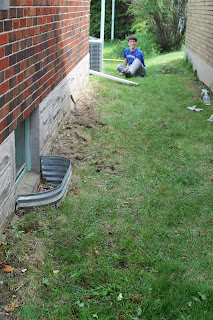 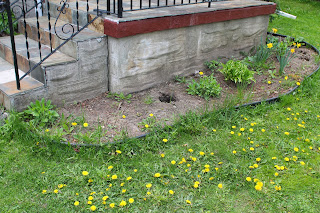 Front bed, after. I gave most of my time and attention to this bed. It got weeded and I planted some annuals in there. Sadly, I didn't have enough so we had to go back to the garden centre for more. I was very sad about that! Ha ha ha! Unfortunately, I haven't had time to finish planting this bed yet so it's a bit of a work in progress. And given that it's supposed to freeze in a couple of nights I have to decide where I stand in the "get things planted" versus "I don't want to cover up everything" spectrum of things. 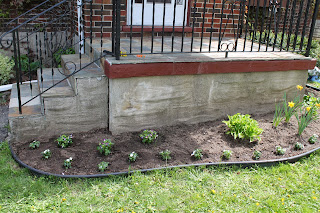 Light post bed, before. It also needed some weeding, especially along the front, and as it turned out, there were quite a few fall leaves still hiding in there. Plus, it needed a basket hanging from the light. 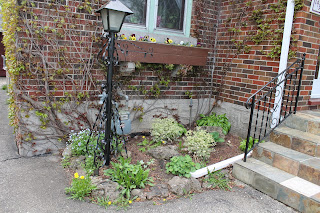 Light post bed, after. See how all the weeds are gone! And the leaves, but you can't tell. 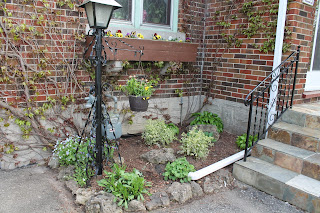 And that was pretty much the extent of our yard work for Saturday. Now I am just waiting for some energy, a nice day, and some time because I have more flowers to plant.

And I think our backyard could use a little attention :) 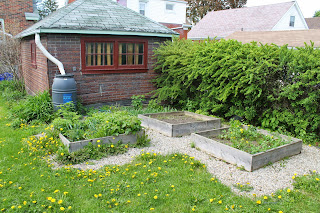 Labels: KW life, Our Forever House, Things That Grow In My Garden