In case you missed it, I wrote a whole post about part of our experience at the Blue Jays WinterFest yesterday. (You can read it here.) Today I'm continuing the story of our day. 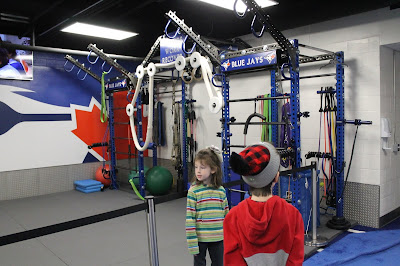 Another part of the Skydome we never get to see is the Blue Jays' clubhouse. However, for WinterFest we were invited to come on in! The tour started with a peek at the training room. We never did figure out what that big machine behind Sam and Rachel is for. 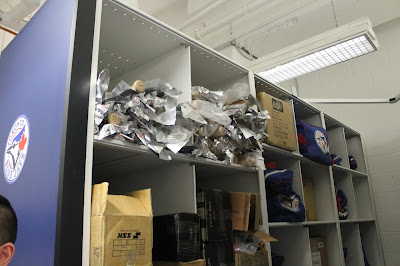 In the picture above you can all the bats, ready for spring. Below, you can see the helmets and the range of uniforms. This part of the clubhouse is where uniforms get fixed and where any special patches get added. 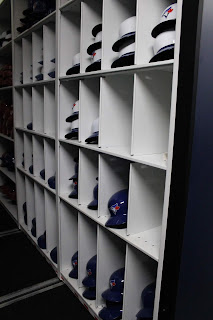 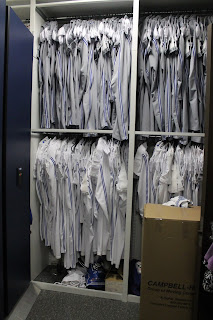 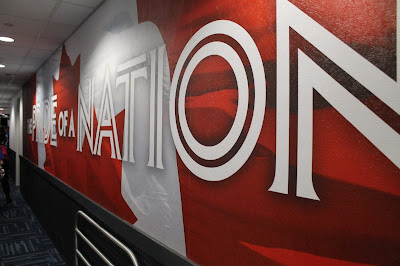 I love that in their everyday space the Blue Jays are reminded that, even though they are based in Toronto, they really do play for all of Canada!

A fun thing which happened on our clubhouse tour is that some of the personnel were trying to do actual work (as hundreds of people filed by!). I started talking to some people who sitting in the office titled, "Equipment Manager." It turns out they were the travel people and I enjoyed talking to them. At the end, the person I'd been talking with (for about two minutes -- it wasn't a lengthy conversation), asked if I wanted a ball. I said, "Yes please!!!"

After all those times of trying to catch a random ball from batting practice, all I had to do was be friendly with the travel coordinator. He definitely wasn't giving them out to everyone so I felt really honoured. (Most of you reading this probably don't care about this, but I want to remember how our family ended up with a Blue Jays 40th season official ball!) 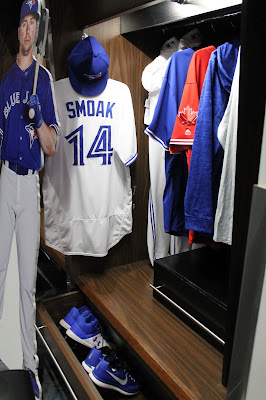 Although the players had cleared their lockers out for the season, a few were set up to show us what they would look like during active use. 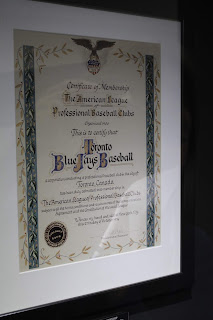 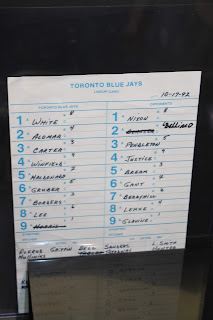 There was also a bit of a memory lane in the clubhouse. On the left is the official certificate declaring the Toronto Blue Jays a part of Major League Baseball. On the right is the lineup card from the very first game of the World Series in 1992. It was the first World Series the Blue Jays had ever played in.

During the day you could meet a few of the key Blue Jays staff and sign a "Blue Jays for a Day" contract. Dave and I were excited to get our contracts signed by Paul Beeston -- the president of the Blue Jays for many years, including when they won the World Series. He was also the president of Major League Baseball for five years. 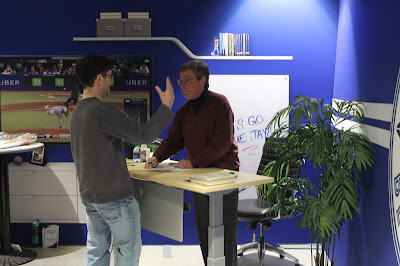 One thing I liked is that he took a few minutes with each person. Dave is obviously giving some advice here and Paul is listening kindly. Ha! 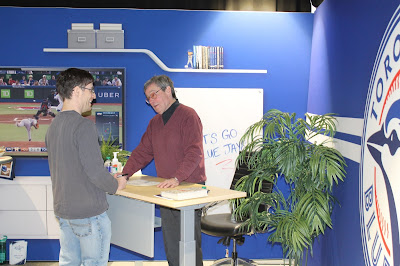 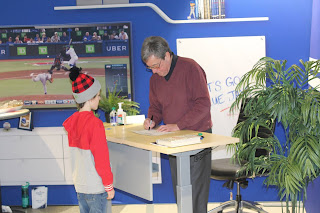 Dave and I are really curious what kinds of conversations he had with the kids. Rachel is obviously imparting some wisdom! I also have a picture where Paul is touching Rachel's bow so there must have been some conversation about that too! 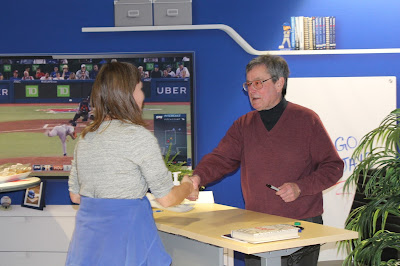 After the contract signing, we were each given an official Blue Jays chocolate chip cookie. When visitors come to the Blue Jays office, they are also offered these cookies. I just loved how the Blue Jays did little things like that to make us feel welcome and to give us an inside look at Blue Jays life.

By the way, Paul's "office" was just set up in one of the main areas so this was all a set but they had books, a plant, and pictures and it felt like you were in a real office. I was just amazed by the level of detail everywhere. 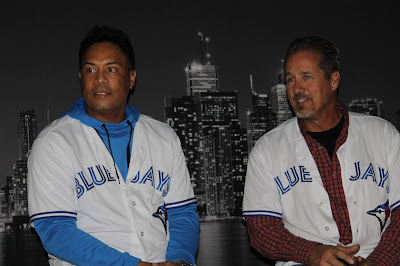 The person on the left is Robbie Alomar. He was the second baseman for the Jays when they won both of their World Series. Until earlier this week, he was also the only Blue Jays inducted into the Baseball Hall of Fame. (Now Roy Halladay has been inducted posthumously and it looks like he will go in as a Jay as well.) The person on the right is Pat Borders -- the catcher for the Jays in the 1992 and 1993 World Series as well as the 1992 World Series MVP. This is a picture I took while waiting in line. 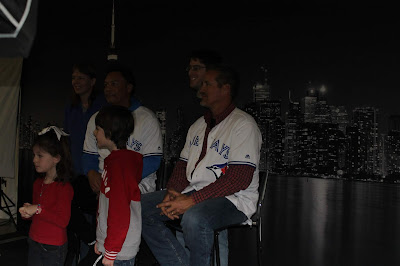 Robbie Alomar is Dave's absolute favourite baseball player of all time! We were so excited when we heard he was going to be at WinterFest and obviously Dave was hoping to meet him! So when we had the opportunity to line up for a picture with him, we absolutely made it happen. This picture was taken by the fans in line behind us and we have an official Blue Jays photo which is much nicer.

I was so excited that Dave got to fulfill this dream, which he mentioned afterwards was an item on his bucket list -- which I didn't know about! 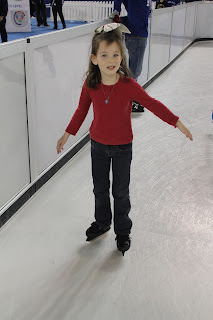 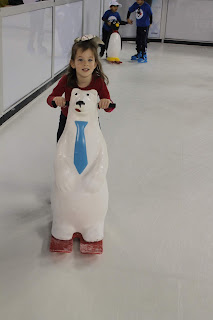 After the pictures we split up. Sam and Dave went to participate in the virtual reality home run derby and Rachel and I went "skating." Yes, they had a "skating rink" on the infield! However, because they didn't have the ability to keep it cold all day, it was a plastic skating rink. They had special skates and it was very different than skating on ice. However, Rachel was excited to skate in the Skydome. So was I! 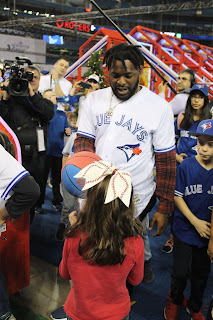 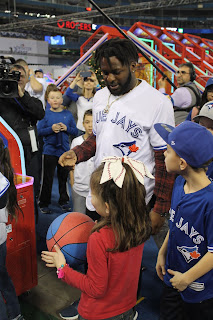 Then Rachel and I went on the huge slide (which I didn't want to do at all but Rachel wanted company). Then we walked over to the arcade area where Dwight Smith Jr was hanging out. He saw that Rachel wanted to play basketball so he tossed her one! 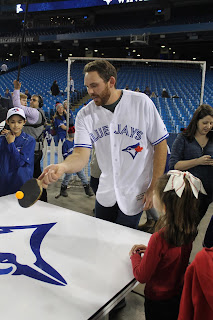 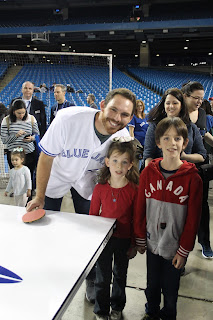 Joe Biagini (a pitcher) was playing ping pong but he kindly posed for a picture with Sam and Rachel when we asked. 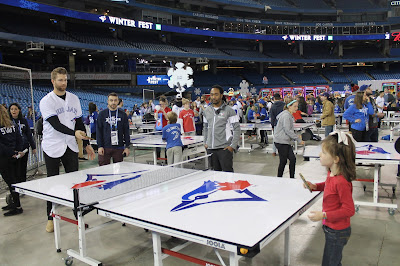 And then Sam and Rachel played some ping pong with TJ Zeuch, an up and coming Blue Jays pitcher. It was so fun to see all these players hanging out and playing games with the fans. 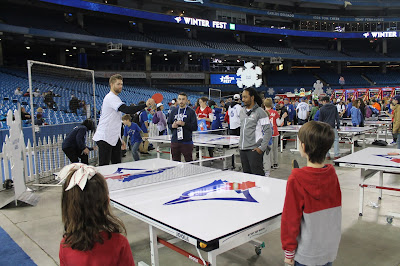 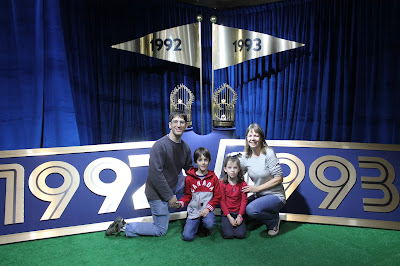 After that, things were winding down but I really wanted to find the World Series trophies from 92 and 93. So we found them and took some pictures. I so remember the winning games from each of these series and how excited all of Canada was!!! 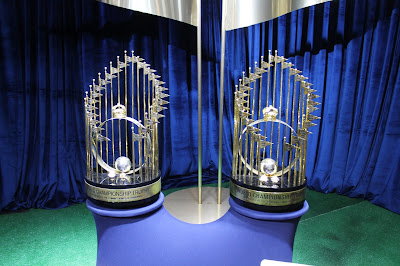 After seeing the trophies it was time to collect our jackets and head home. We had the absolute best day ever (!!!) and wished we were free on Sunday so we could go back.

We are absolutely going to go back to WinterFest and, if they offer it over two days, we would definitely buy tickets for both days. The players change from day to day and there were so many things we would have loved to do -- or participate in -- for longer. After all we didn't get to ride the merry-go-round, we didn't get to pose inside the snow globe, we could have played catch on the field for much longer, and we didn't get to meet Ace and Junior -- the Jays' mascots.

So next time look for pictures from the top of the ferris wheel because that will definitely be on our list for next WinterFest too!!!
Posted by Natasha at 07:57

Labels: All About That Base(Ball)