I mentioned in a post awhile ago that instead of birthday presents, Dave and I give each other experiences instead. In November, I asked Dave if he wanted to go to the Blue Jays WinterFest as his birthday experience. He said yes, so I bought tickets and we waited for the big day. We didn't quite know what to expect but it seemed like it might be fun!

This past Saturday, it finally happened and it was better than our wildest dreams! I took 311 pictures and I will try not to share all of them! There were basically three parts to WinterFest -- we got an inside look at The Skydome (see why I refuse to call it by its new name here), we got up close and personal with some of our favourite Blue Jays, and we did some "winter carnival" type things. There was a lot to pack into seven hours!

We drove in early because we were a little concerned about bad weather and we wanted to squeeze all the fun we could out of the day. We started to go to our favourite Starbucks, which is inside a hotel that overlooks the baseball field. In the lobby was JOE CARTER who helped the Jays win back to back World Series in 1992 and 1993. You can watch this video for one of his greatest moments as a Blue Jay. 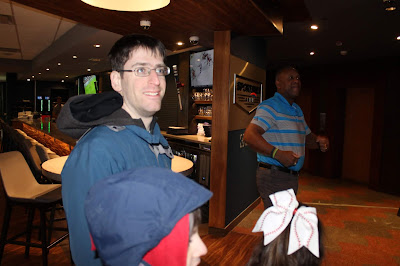 This is not a great picture but Dave flagged him down, and even though he was in a bit of a hurry, he shook hands with all of us. Rachel stuck out her hand and said, "Hi! I'm Rachel," and he replied, "Hi Rachel! I'm Joe." So we all introduced ourselves and it was great. And then Dave was in shock that we had actually met Joe Carter. 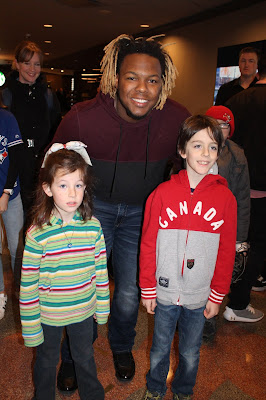 Then we turned around and Vladimir Guerrero Jr was standing there. In case you haven't heard of him, he's one of the biggest up and coming stars in baseball and he plays for the Jays. He kindly posed for a picture with Sam and Rachel. There were all these young men sitting watching Vladdy (as he's called) pose for pictures and so we introduced ourselves to them. We met Julian Merryweather (a Jays pitching prospect), Trent Thornton (a Jays pitching prospect), and Jacob Waguespack (another pitching prospect). I think the Jays want better pitching this year - ha! Then the players had to go eat breakfast and we lined up to go to WinterFest. (We never did get our Starbucks. Ha!) The event hadn't officially started yet and we had already had fun! 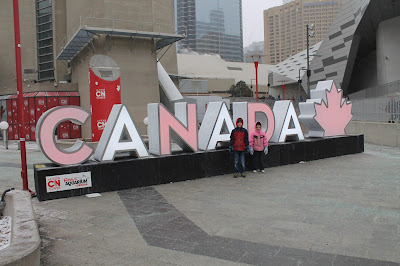 I told Sam and Rachel that they had to pose nicely for pictures all day and we practiced by getting a picture at the "Canada" sign outside the Skydome. 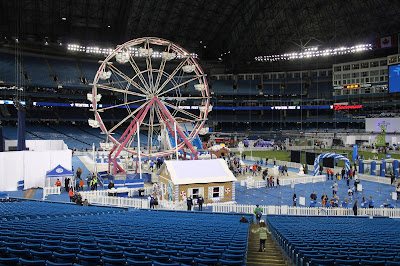 There were about thirty places we could visit throughout the day. This was on the field as we walked in. Notice how there are no people there! And yes there was both a ferris wheel and a merry-go-round. 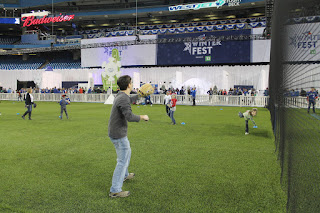 We started at the catch and throw area. This was basically the middle of the outfield. It was really fun to be able to toss around a ball where we've seen the Jays play so many times before. 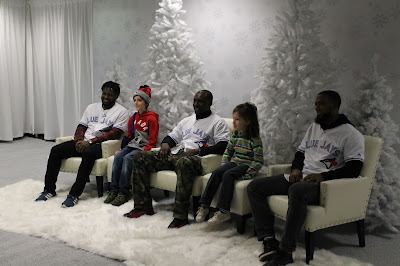 Kids 14 and under are called "Jr Jays" and there were certain things only Jr Jays could do at WinterFest. One of them was getting their picture taken with certain players. This is Sam and Rachel with Dwight Smith Jr, Orlando Hudson, and Teoscar Hernandez. Smith Jr and Hernandez are current Jays players and Hudson played with them in the 2000s. Sam was excited because he has Hudson's baseball card. Also, the kids each got the official photograph in a frame but this was my picture taken from the side. 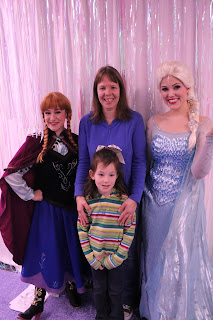 After getting their picture taken, we walked through a little winter wonderland, met Olaf, Elsa, and Anna and the kids got a free chocolate bar. Rachel told Elsa and Anna, "I saw you a few weeks ago on Broadway!" 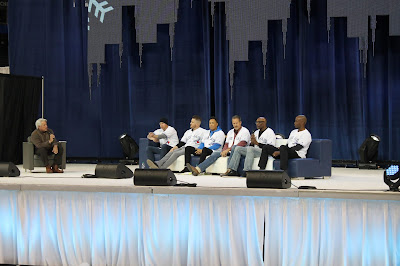 There was a main stage set up and this was Buck Martinez (on the left), one of the Jays TV announcers, interviewing Justin Smoak, Ken Giles, Robbie Alomar, Pat Borders, Lloyd Mosbey, and Fred McGriff. It was a fun mix of current and older players. Dave and I LOVED this but I think the kids were a bit bored by it. 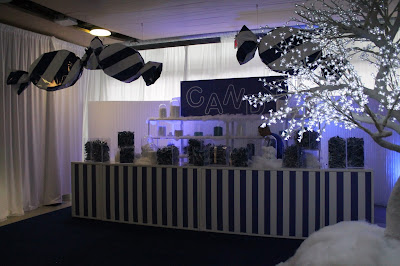 After lunch we walked through the Winter Wonderland where the kids got free candy and cotton candy and we admired the penguin ice sculptures. 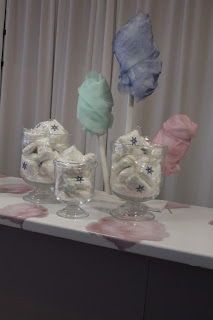 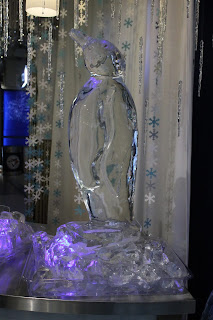 We got a quick visit in to the Jays dugout which is normally off limits. 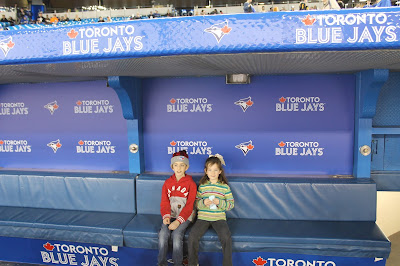 Then we lined up to throw some pitches in the bullpen. The lineup was about half an hour long so Rachel and I scooted over to the life sized gingerbread house. Inside was cookie decorating. I told Rachel she had to be efficient because I didn't want to lose our chance to pitch! She understood. 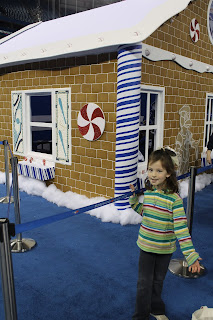 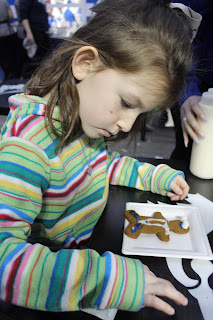 We got back to the pitching lineup and Dave and Sam had moved about twenty feet! 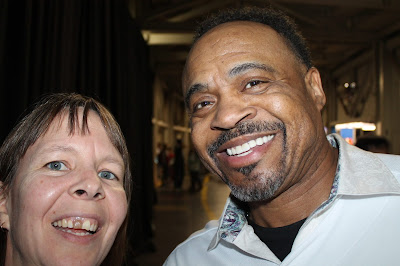 Throughout the day, players would walk by us on their way from one spot to another. The first Jays' games I really remember watching as a kid were when the Jays were doing well in 1985. They finished first in the AL East, winning 99 games, and they were up 3-1 in the ALCS (last stop before the World Series). Unfortunately they fell apart and ended up losing the ALCS against the Kansas City Royals. Jesse Barfield was the right fielder during that time and one of the best Jays' players to that point.

Dave recognized him walking by and Jesse was kind enough to stop for a moment and pose for a selfie with me. Which I took with my DSLR! Thus, I look ridiculous but I'm really happy I got Jesse framed well. Ha! 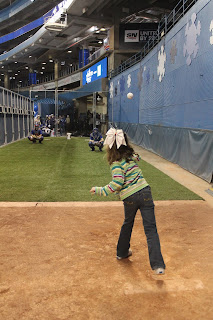 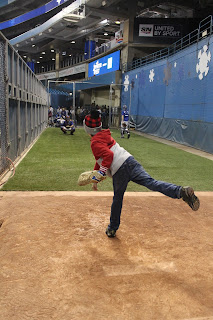 Sam and Rachel warming up in the Jays' bullpen. This was an amazing moment! Look at their forms! 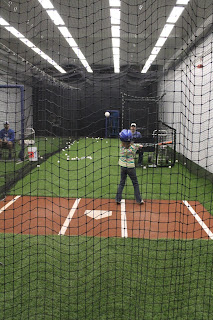 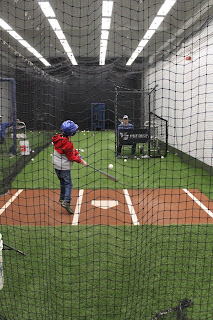 From the bullpen, we got a chance to hit in the batting tunnels, a part of the Skydome I had never seen before. It was really fun!!! 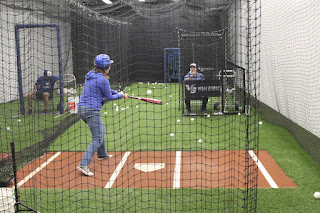 And because this post is already fairly long, and I've bored you with enough Blue Jays' history, I'm going to continue the rest of this tomorrow. But make sure you come back because Dave got to fulfill a bucket list item!!! Yay!!!

Labels: All About That Base(Ball), Birthdays