Book Review : The Ship of Brides

One yearly resolution I made for 2019 was to write more book reviews. I count so much on other people reviewing books to help me figure out what to read. And while I do post mini reviews on Instagram, it's not of every book I read, nor do I get to say a lot about them. So here's my first review of 2019. 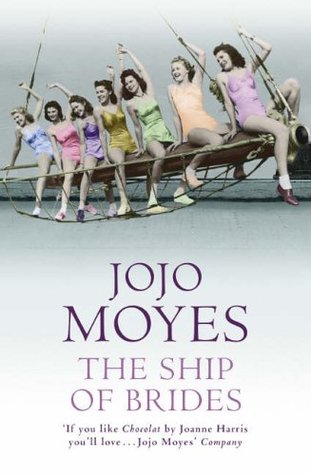 The Ship of Brides -- Jojo Moyes

I must have known that during the world wars, women married soldiers who were serving in their countries and then, after the war, would join them in their home countries. However, this story of 650 brides from Australia being sent to England to live with their husbands was so interesting to me. Aside from learning about yet another World War II story I had no idea about, I just really liked this book.

Can you imagine falling in love with someone under the most extreme circumstances (wartime), getting married, and then corresponding only by intermittent letters for however long -- six months, a year, longer? Then you pack up everything, leave your family and your country, and go on a six week sail to join this man (potentially somewhat of a stranger) in his home country? And on your travels are 650 other women who have done the same thing? Oh, and your sailing is on a decommissioned aircraft carrier and there are 1000 soldiers heading home after the war, on the ship as well? And to top it all off, every once in while, one of the brides gets a telegram from her husband with the dreaded four words, "Don't Come Not Wanted" and she gets put off at the next stop and sent back home. To say it would have been an emotionally perilous journey is not understating facts.

I think this was Jojo Moyes fourth book (she has now written about fourteen) and it was so different from Me Before You and the rest of that series. This was a long (482 pages) historical intrigue. Moyes follows the stories of four women (and one marine) who are on the ship. It reminded me, in terms of the topic, of her book, The Girl You Left Behind, except there was no "current story." I guess I don't think of Moyes as a historical fiction writer but she shines in this aspect.

I started this book at 9 at night and read until 3am. It sucked me in. And then after a few scant hours of sleep, I woke up and basically finished the book. (And I didn't read this during a readathon!) I was so sad to have the book end -- especially the stories of Maggie and Frances. I wanted to know more about them. After all, we got a six week window (with a few chapters of their history) into a life-changing moment in their lives and I wanted more.


My only complaint is that Moyes used a lot of naval terms, and I didn't really know who those characters were or what they did. I still don't know the specifics of a stoker (I think they helped keep the engine running), coxswain, and I think rasher was another one. I wish that Moyes had included a definition/explanation of some of the hierarchy because I got a little lost in those terms.

Other than that though, I would suggest putting aside some time and reading this book. If I were on Goodreads,* I would give The Ship of Brides a 4.5 out of 5 stars. It will likely not make my top ten lists for this year but it's definitely worth your while.

*I am on Goodreads but I don't do anything there. I just haven't gotten into it.
Posted by Natasha at 07:53