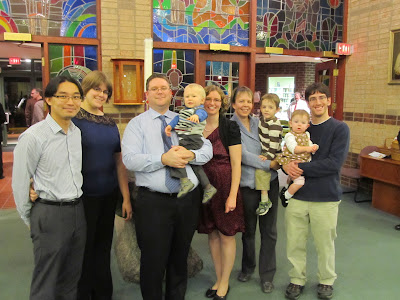 On Saturday Will, who is the son of our friends, Jen and Mike, was baptized. Jen is Catholic and so it was at a Catholic church. I was surprised by a number of aspects. First of all I was expecting a large old cathedral, kind of like the church which is across the street from us. This church was quite modern and very warm (temperature wise). (I think of the stone churches as cold so I was prepared to freeze!) Second of all, there were lots of kids and, most of the time, my kids were not the most disruptive, which was actually a pleasant surprise! Of course, Dave said that it was because I was sitting between Donny and Marika and didn't notice how disruptive they were being. Ha ha ha!

The priest was quite funny and I really resonated with his sermon. Last time I went to a Catholic church the homily just made me really mad. And I realize that every homily, and priest/minister/pastor is different but it was just a bad memory. I wanted to be able attend this church more! But it's in Newmarket which is a couple of hours from here.

There was a part at the beginning of the baptism where all the parents and godparents were invited up to the front and there was a bit of the ceremony which happened then. After that the priest made the sign of the cross on each child's forehead. Then he invited all the baptised friends and family of the children to come up and make the sign of the cross on the children's forehead as well. It was a way of welcoming them into the body of Christ. So I went up and welcomed Will. It was so meaningful and special to be able to do that.

I am so glad that we were able to celebrate with Jen and Mike and Will on Saturday. It was a very meaningful service for me and I'm so glad we were able to attend. And thanks to Jen for sharing her pictures with me since our camera was in the car. The first picture is Donny and Marika, Mike, Will and Jen and our family. (We had to bribe Sam to be in the picture with being able to play on Marika's iPhone on the way home which is why he is being so cooperative! Ha ha ha!) Below is Jen, me and Marika. I love these two friends! 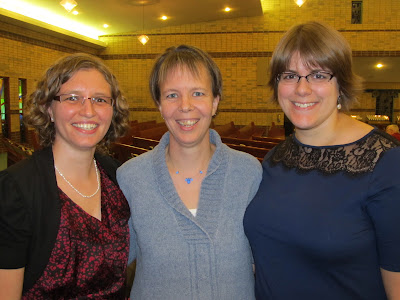