This morning I woke up 7:25 and jumped (slowly) into the shower. We won't talk about the fact that I was intending to be awake by 6:40 so I could eat breakfast before the kids were awake. I was tired. By 7:45 I was downstairs and checking computer stuff (blogs, email, etc). At 8:30 I woke up the kids (again, later than I had intended), got Rachel and I dressed, and fed everyone breakfast. I had tea and a yogurt. And my Lady Grey Tea had a surprise sample tea bag for me this morning -- Orange Bliss. It was okay but I won't be looking for a box of it anytime soon. 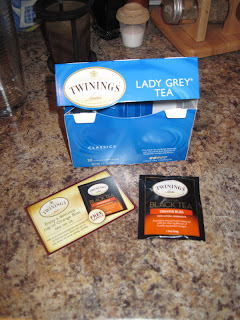 Rachel had two yogurts and Cheerios and Sam ate two Hallowe'en treats (sour things and a bag of chips) and half a yogurt. (For Sam's Hallowe'en treats I told him he could only have three a day but he could eat those three whenever he wanted them. It's been a pretty good system so far!). 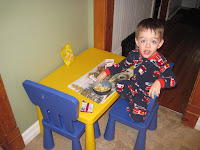 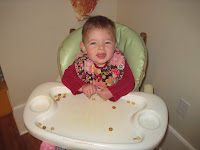 I cleared away the clean dishes because Dave didn't have time to do it this morning. I know pictures of our clean and dirty dishes are boring but I seriously spend 50% of my time dealing with dishes (in some form or another) and laundry. At least it feels like that. 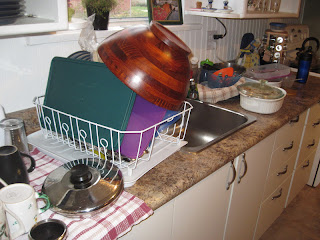 Around 9:10 I got Sam dressed downstairs and left for Let's Play, eating a muffin on the way. Let's Play is an organized play group hosted by my church. It's awesome because they provide a snack and I get to visit with other moms. By 9:40 we were at Let's Play and I talked with other moms, changed Sam's poopy diaper, and supervised Rachel during her snack. She stood for snack like the big kids do instead of me holding her on the counter. However she walked around a lot so the other three kids were crowded at one end of the table and Rachel had half the table to herself. Ha ha ha! 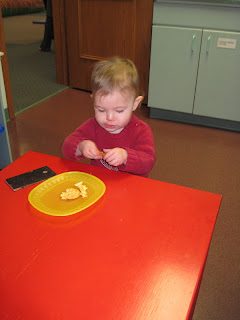 Let's Play ended around 11:00 with the singing of some songs and then the kids ran around in the Fellowship Hall for a bit. By 11:45 we were home from Let's Play, and I got the first of five loads of laundry going and paid some bills. Rachel and Sam played and I got out some colder weather gear to wash it -- it's time for hats and mitts already :( 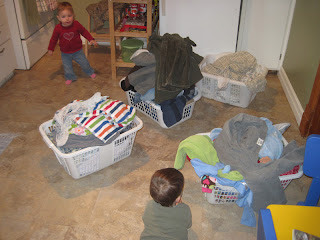 At 12:30 I was doing dishes and the kids were playing with the recycling. It basically means they empty all the paper recycling out of the bin and spread it all around. I hate that game. Grrrr. 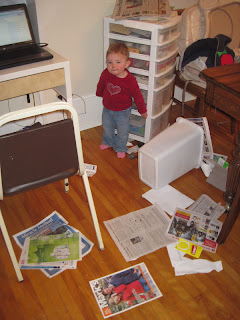 Around 1:00 I was eating lunch of leftover baked lentils, feeding Rachel leftover tuna noodle casserole and threatening Sam to get him to clean up the recycling. I ended up getting one of his Hallowe'en treats since he wasn't listening well. What on earth will I do when his Hallowe'en treats are gone and I can't tell him I'll take one for me if he doesn't listen?!?!?! At 1:30 I put Rachel down for nap and Sam down for quiet time in his room. 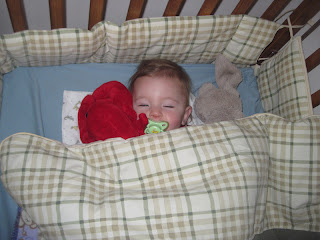 By 1:50 I was checking blogs and e-mails, responding to messages, and sorting pictures to print. And I was eating Hallowe'en candy and drinking a Coke plus dealing with more laundry and my pile of stuff on my desk. Sam finished his quiet time around 4:00 and Rachel woke up. I gave the kids a snack of animal crackers. I also folded laundry, found hats and gloves/mitts to help everyone to deal with the colder mornings we've been having and moved the summer hats downstairs. Boo to colder weather :( (I know, I complained about the heat all summer and now I'm complaining about the cold. But I am already sooooo cold and it's just going to get worse.) 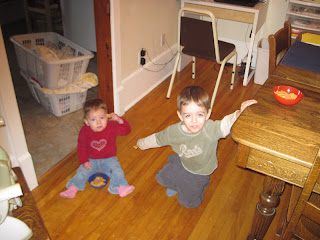 Yes, sometimes it's just easier to feed Rachel a snack on the floor.
Don't judge me :) 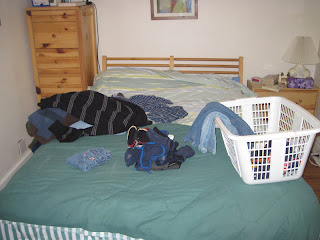 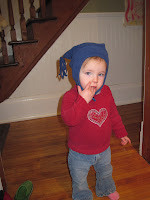 I started our supper of curried butternut squash soup around 4:45. Dave got home around 5:10. Sam was playing downstairs that whole time and Rachel had been wreaking havoc with the dirty laundry in the kitchen. By 5:30 the soup was simmering, Dave and kids were downstairs, I caught up on Kitchener Posts (a weekly newspaper I am about three weeks behind on, which isn't bad!) and did some more laundry. (Remember that whole five loads thing?!?) Around 5:55 I pureed soup for supper using the Magic Bullet because our food processor broke this past summer, Dave helped, Rachel got in the way, and Sam was STILL playing downstairs. I love how he can entertain himself for so long. By 6:15 we were eating supper. Soup and toast. 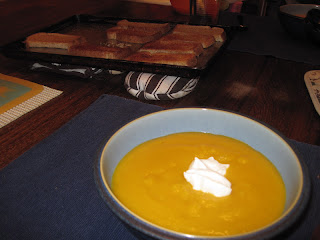 By 6:35 I doing still more laundry and we were getting ready to go to library. We left around 7 and had about forty-five minutes at the library. I found a bunch of books for Sam and Rachel (I just go through the shelves methodically and pick about thirty books which look interesting. Sometimes they are and sometimes they aren't!) I was tired at the library so I flaked out on a bench for awhile (like three minutes!) while Sam and Rachel played with magnetic letters. 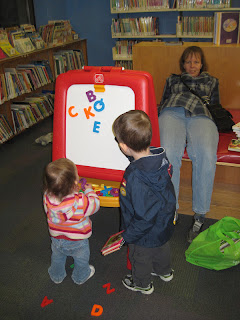 Then I read Rachel some books. 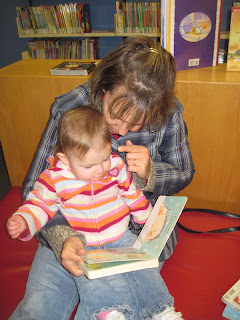 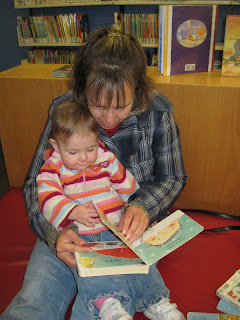 By 8:00 we were home and I had changed into my pjs. I read Rachel four stories and put her down for bed. I put the fifth load of laundry in the dryer and took the fourth load upstairs. I'll fold it tomorrow as there's only so much laundry I can do in a day. By 8:30 I had made tea and was writing this blog post. Dave was giving Sam a bath and putting him to bed. Now it's 9:00, Dave is done and we're going to watch some Modern Family. Then I'm going to bed.
Posted by Natasha at 21:08