Report On February Goals (With A Surprise January Update!)

So it's time to take a look at my February (and annual) goals and see where things are at.

1) Figure out cloth recycling and
3) Go through our room, especially my clothes.

I had no idea that my goal to figure out cloth recycling would generate so much discussion from all of you. I loved it! We did send a whole bag of old clothes/shoes to the school for their fundraiser (where they collected 1,389 pounds of clothes/shoes).

I called my local thrift store (which is a small one run by my denomination) and they don't do a whole ton of cloth recycling so I was disappointed. However, Janice called me up one day and told me that she had been at H&M and they accept bags of clothes for recycling -- even ones which aren't in good condition. So now I have another bag of old clothes which I will add to until it's full and then off to H&M it goes.

I'm so happy that I have a great way to deal with old clothes.

And let me add, if the clothes/shoes we want to get rid of are in good condition we absolutely donate them to the thrift store. My dilemma has been -- what about the ripped/stained clothes? 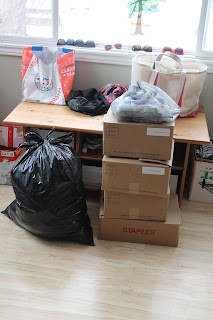 The garbage bag is clothes/shoes to be recycled, and the four boxes and bag went to the thrift store after Dave and I went through our clothes and Goal 2 (below) was accomplished.

2) Go through the play room.

I'm so happy that one Saturday we did this as well. It made such a difference in my mindset since the playroom is also our back entry so I see it multiple times every single day. It's also a good thing I took a picture of the play room right after we went through it, because now the kids' Valentines cards (and some baseball cards) are scattered all over the place. 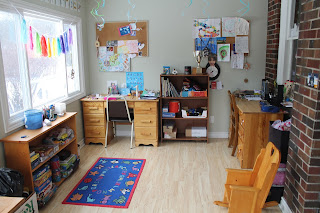 One thing I noticed is that we threw out a lot more things than normal and didn't have as much to donate to the thrift store as we usually do. I think the things the kids are done with these days are cheap toys (free with kids' meals usually) or paperwork which gets recycled.

Done and done! Our 2018 album has been added to our photo shelf and has been looked at numerous times. And the best news is that my "photos" folder on my computer went from 72 folders down to 19.

We have figured out Sam's birthday party. Since it won't be until mid-April, that gives us lots of time to get invitations out. It will be quite simple this year which is good!

I am happy to report that my gums have stopped bleeding (YAY!), Rachel no longer asks me questions, and it only takes me about an extra minute or two. I think I will keep up this flossing habit because supposedly it's good for me...

7) Get outside every day.

Ack. This was such a hard goal to measure. I don't really know how I did at it. I think next time I set this goal, I will make it measurable like "Get outside for thirty minutes every day" or "Take 5,000 steps outside every day" or something like that. I was outside a lot shoveling or chipping ice but I don't know if that counts or not.

This was an easy goal to measure because either I baked or I didn't. And, here are my three challah baking attempts. 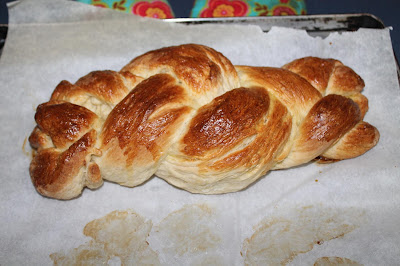 Attempt 1 -- the recipe I used had vanilla in it and we didn't like the sweetness.
However, it made AMAZING French toast the next night. 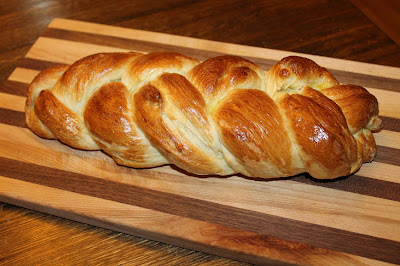 My challah braiding technique is getting better. 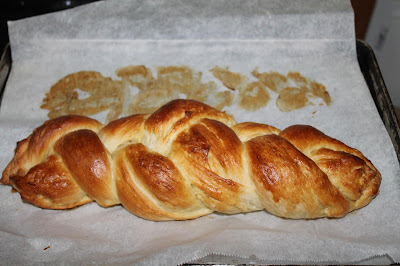 Honestly, I almost didn't make it this day because it was a busy day.
But I persevered and my whole family loved it.

Remember how in January, I wanted to get my Tupperware situation sorted out and it just wasn't happening? I sent pictures to a local Tupperware consultant in early February and didn't hear thing one from them for weeks. Then suddenly, this past weekend, she called me back and on Wednesday I picked up all my NEW Tupperware -- mostly lids. I'm sooooo excited this finally got accomplished. 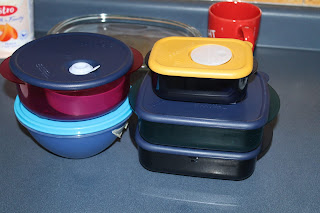 I took at least one picture every day in February so I'm really happy with how this is going. 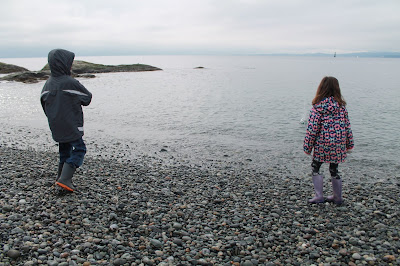 My daily photo from February 15.

2) Read through my whole Bible in one year.

I decided I needed to get more on top of this in February. I'm not as caught up as I'd liked to be but as of yesterday I'd finished the readings up to January 16 so that's better than nothing. We'll see where I am at the end of March. 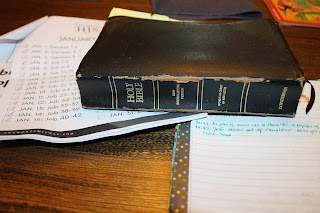 I only wrote one review in February -- boo. I need to make this a priority in March. I think part of my struggle is should I write reviews for books that everyone is writing reviews for (Becoming by Michelle Obama for instance) or ones that I really liked but you may not have heard of? I think it'd be easier if I had a list of books to review.

4) Read out loud to the kids more.

I did not do well with this goal this month. In fact, I'm not sure I read to the kids at all. I have a concrete goal in March to help me with this one, which I think will help.

Phew! Thanks for sticking it out with such a long post. I seriously think having these goals written down, and knowing that I will be writing an accountability post at the end of each month, helps me stick to the majority of my goals.
Posted by Natasha at 08:06