I stole this survey from Allena. Dave helped me fill it out. I decided to make this post more interesting by posting older pictures of the two of us. Enjoy! 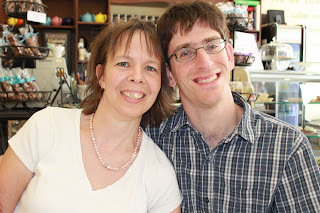 Who was interested first? We both think Dave was interested first. Hahaha! It first crossed his mind in October 2005. We became housemates in the fall of 2006 and that led to us getting to know each other better. Dave eventually asked me out in November 2006. Two weeks later, I said yes! (We had a lot of groundwork to figure out first.) As soon as I said yes, I asked him if he would go out with me and he said yes, too!

Married? Yes. It will be eleven years in June. 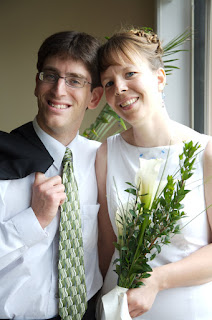 Who makes the most mess? Neither of us. We're both neat freaks. 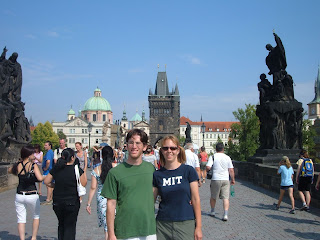 July 2007 -- The first summer we were together
we traveled to Europe for three weeks.
This is us on the Charles Bridge in Prague.
Who has more tattoos? Neither of us, although I have five piercings. Does that count?

Better singer? Definitely Dave. He actually sings solos at coffeehouses and used to sing on open mic nights in university.

Hogs the remote the most? We don't have a TV (and therefore, no remote). 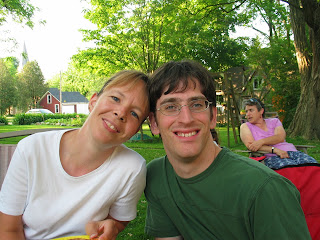 June 2007 -- At a party for Dave for getting his Masters Degree
and a farewell party for both of us as we were moving to Alberta.
Has the craziest exes? Definitely Dave. We both agree on this one very easily.

Spends the most? I spend more on flowers, he spends more on eating lunches out. Neither of us likes to spend all that much money on our own. 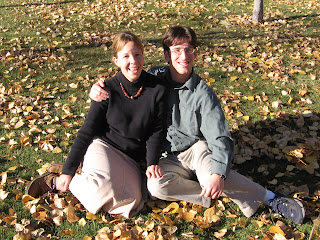 October 2007 -- shortly after we got engaged.
This is our "engagement picture."

Smarter? I know five languages, Dave has a PhD. You decide...

Most common sense? We both quickly agreed that I do!

What are your middle names? Mine is Jean, Dave's is his mom's last name, which she kept and gave to Dave as a middle name.

Whose siblings do you see most often? Dave's, although we don't see either of our siblings all that often. 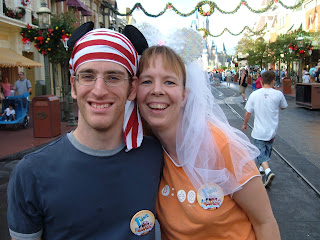 December 2007 -- At Disneyworld in Florida
Do you have any children together? No, we borrow our friends' kids for all the pictures on the blog!!! Okay, okay, meet Sam (almost ten) and Rachel (seven and a half). 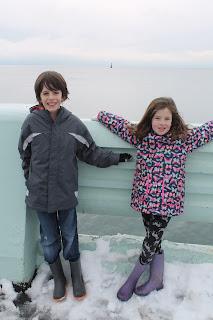 Did you go to the same school? Technically we went to the same university and stayed in the same residence but not at the same time.

Who is the most sensitive? I am. 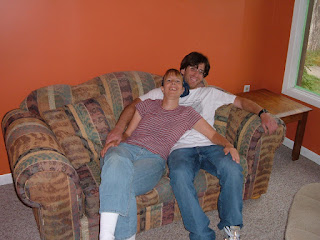 August 2007 -- We had just moved to Edmonton and
painted our entire house.
Some furniture was moved in and we were done.
Where do you eat out most as a couple?  Subway. Totally pathetic. We rarely go out to eat together and when we do, we like to try out different restaurants.

Who has the worst temper? Me. We both agreed on this one fairly quickly! 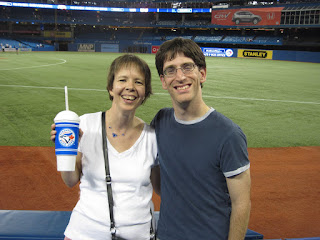 June 2012 -- Celebrating our fourth anniversary at
a Blue Jays game. I'm 99% sure celebrating
this way was my idea! Ha!

Who does the cooking? Me, but probably because I'm not working full time. Dave makes more elaborate meals when he has the chance to cook.

Who is more social? Me. I have more friends. Ha!

Who is the neat freak? We both are. It makes living together much easier. 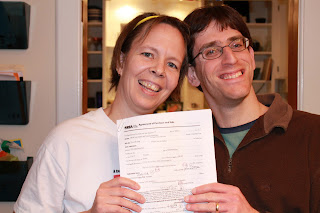 January 2013 -- We had just signed an offer on a house.
Sadly, we had to let that house go due to structural issues.
ALWAYS make a house inspection part of the deal.
Also sadly, I had just gotten home from the gym
when we signed the offer and took this picture :(

Who is the most stubborn? Me. Sadly, by a very long shot.

Who hogs the bed? Dave. I'm constantly waking up cold because he has all the covers.

Who wakes up earlier? Me. I try to wake up at 5:30 every morning, Dave drags himself out of bed around 7:30. Coincidentally, he also goes to bed around 1am while I'm usually asleep before 11 -- if I'm not caught up in a good book.

Where was your first date? We went to see The Departed at a local movie theatre. Since we were housemates, going on dates wasn't a huge priority because we already spent a lot of time together :) 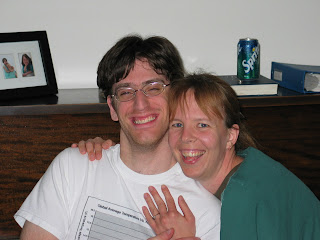 April 2007 -- Our good friends had just gotten engaged
and we were playing around with her ring :)

Who has the bigger family? Me. I took Dave to Saskatchewan to meet my family for my grandma's 100th birthday and he spent a month memorizing where all 67 aunts, uncles, cousins, and cousin's kids fell on the family tree. And that was only one side of my family!

Do you get flowers often? Yes, but only because I buy them myself. I like it better that way.

Who does the laundry?  Me, but Dave takes out the garbage and recycling and cleans the bathroom (usually) so it's a fair deal. I don't put Dave's laundry away, though I do fold it. 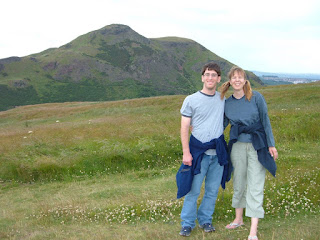 July 2008 -- at Arthur's Seat in Edinburgh, Scotland
on our honeymoon.

Who's better with the computer? Dave. He has a PhD in Computer Science so he'd better be better with it :)

Who drives when you are together? Usually Dave, unless we're on a long road trip. I don't really like to drive.

Who picks where you go to dinner? See above -- we rarely go out to dinner and when we do, we compromise. 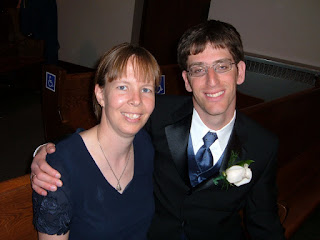 Labels: Blogging, Sucked In By Surveys