The Labours Of Labour Day 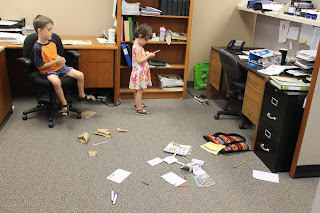 This weekend has been, well, rather labourious. It started off with bringing Sam and Rachel to work with me for a few hours on Friday. They had fun. Thankfully, there was only one other staff person in, and he left about half an hour after we got there to run some errands. Coincidence? I hope so :) The kids pretended they were detectives and left clues all over the office. I hope we found them all before we left. 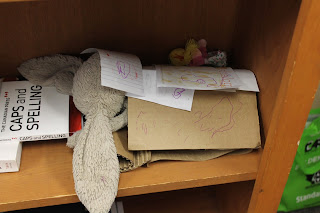 Rachel also took good care of Funny Bunny and made a bed for him on one of the shelves out of some cardboard. 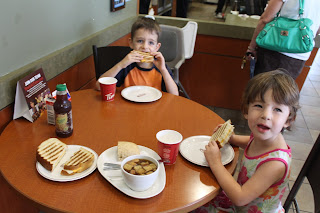 Because the kids were relatively well behaved, we went to Tim Horton's for lunch. Then we bought a toilet.

Saturday was a bit of a wash because I wasn't feeling well. As in "I only got 2,600 steps on my Fitbit all day" not feeling well. Normally I try to aim for 10,000 or more. Thus our plan of organizing a few rooms in our house was postponed. 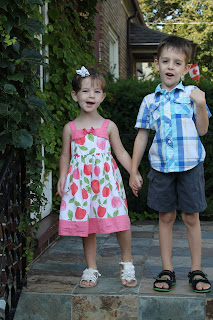 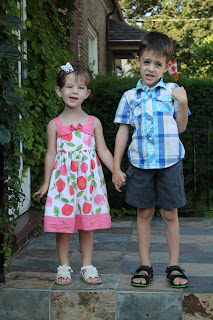 On Sunday we finally made it to church for the first time in a long time. Sam and I read Scripture. And the kids posed nicely for a photo. Well, "nicely" if you include "making weird faces at the camera" in the definition of "nicely."

After church we joined the impromptu church lunch in the park for a bit and then we headed home to organize. We went through the playroom and Sam's room and got rid of one box of garbage, two boxes of recycling, three boxes of books, and four boxes for the thrift store. Also, if you can explain this collection of headless Lego people which was on the shelf in Sam's room, we would love some insight into our children's minds. 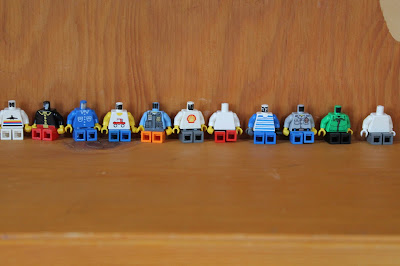 The unexpected highlight of the weekend was when friends of ours gave us their old trampoline. We definitely weren't expecting to acquire a trampoline this weekend but sometimes life surprises you! The kids have really enjoyed it for the ten minutes they've jumped on it thus far. We need to put up the safety net and it's just been too hot to do that yet. 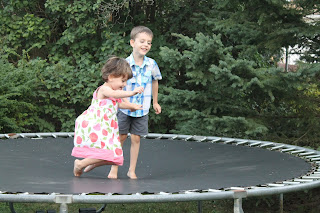 Today I attempted to turn myself into a morning person by working from home for the hours between 6 and 8. I think I did fairly well, and after Dave gets back from an appointment, I will be heading into the office for a few more hours. Yes, it's technically a holiday but thankfully our massage therapist scheduled an emergency appointment for Dave as he hasn't been able to move his head comfortably for about a week. And I won't be working tomorrow because it's Rachel's first day of school where "first day" is defined as "a forty minute visit."

I hope your Labour Day plans are more exciting than ours :)
Posted by Natasha at 08:45

Labels: Celebrating Holidays, Sam, Schoolgirl Rachel, Waterloo North Mennonite Church, We Are Healthy (Or Not), Working For The Weekend