Yesterday at MOPS (Mothers of PreSchoolers) the craft was making Gingerbread Houses using Graham Crackers instead of gingerbread. Rachel was being pretty fussy and I knew I wouldn't get the house made in the time we had. Emily, who had organized the craft, said I could take supplies home so I decided to make it with Sam. Or you know, construct the house during his nap and decorate it with him afterward! 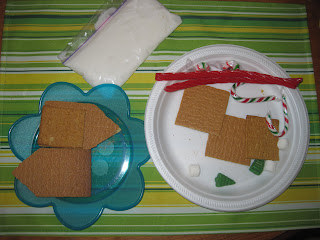 The supplies are all ready to go. 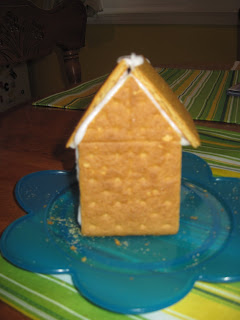 I didn't know these pictures were so blurry so I'm only posting one. What this picture doesn't show is how badly my house is listing. I obviously didn't give it a solid foundation :)

When Sam woke up from his nap we decorated. This means that he picked which candy should go where and I used the icing to attach the candy to where he said it should go. Let me tell you it was NOT my idea to put a tree on the roof! 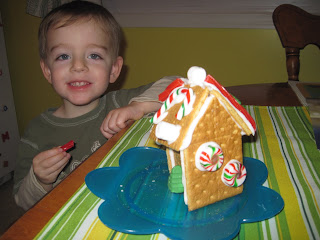 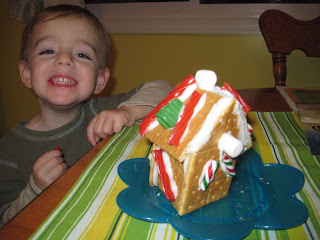 You can see the listing-ness of the house in the second picture. Oops! This was a lot of fun to do and a pretty low-key craft, mostly because the supplies were given to me which was awesome :) Thanks Emily and MOPS!

And Rachel almost successfully wore shoes yesterday! These shoes were lent to me by the same Emily as above. And Rachel kept them on for almost four hours straight, with a few minor exceptions. You can see she is pretty happy to be standing :) We're so close to walking. Ha ha ha!!! She didn't even take a step during this time. 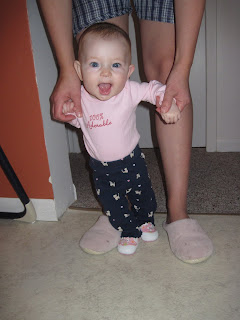