Last week sometime a flyer appeared in our mailbox advertising a Bethlehem Walk at a church in West Edmonton. Since Dave and I have talked about focusing on celebrating the religious meaning of Christmas we decided that this might be a interesting thing to do. I did a Bethlehem Walk last December when Sam and I went to see Parker's pre-school program which happened to be during a Sunday morning church service. After the service the church had set up a mini-replica of Bethlehem and we got to interact with some shopkeepers and Sam petted some animals. So I had a small idea of what to expect.

When we got to the church this past Friday night, there was about a half hour wait for the actual walk part to start. Since it was already ten to eight Dave and I seriously considered leaving since both kids needed to get to bed. We decided, however, that we would not make it back for this walk (since it was about a half hour drive from our house) so we stuck it out. While we waited a children's choir was singing (which brought tears to my eyes) and there were some instrumental numbers to entertain us. Sam and Dave found a train table and I talked to the people in line behind me who held Rachel since they couldn't hold their 3-month-old granddaughter in California. Rachel was super-cute when the uncle showed her a video of his niece on his iPhone and she tried to kiss the video :) Awwwww! 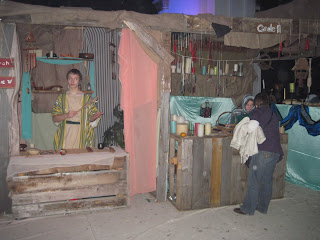 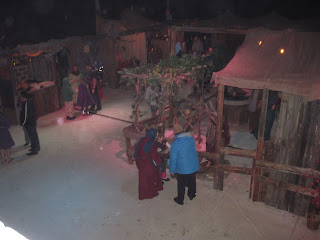 There was a five minute introductory video, which was not a highlight. Then they led us into the "Fields of Bethlehem." Sam, however, lasted about 30 seconds until he got freaked out by the shepherd and the darkness so we got a backstage security escort to the "town of Bethlehem." There were so many cool stalls and the people were all saying "Shabbat Shalom!" since it was the Sabbath after all. 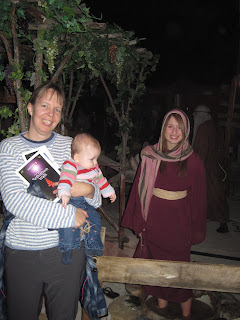 Some of the stalls we visited were:
-- the wool broker and basket weaver where they tried to talk us into a new bed for Rachel!
-- the potter's place which had a real potter actually creating on his wheel
-- the broom shop where we received a mini-broom
-- the animal pen where Sam got to pet a bunch of animals with Dave's help
-- the soap shop where I got to smell frankicense and myrhh soap
-- the Temple/Synagogue where Sam was excited that the one "rabbis" lifted him up
-- Peter's Fish where they were insistent that we needed fresh fish for supper
-- the vineyard where a woman was making wine by stomping on grapes
-- Korah Music where Sam got to try some of the instruments
-- the Mosaic shop where Sam got to try his hand at making mosaics
-- the Honey Hive and Dead Sea Rolls were right next to each other and their products mixed together wonderfully!
-- the spice shop gave us a packet of cinnamon to bring home with us
-- the Tea Shoppe merchants let Sam crush some coffee beans with a mortar and pestle
-- the school where they had the names of the books of the Torah written out in Hebrew 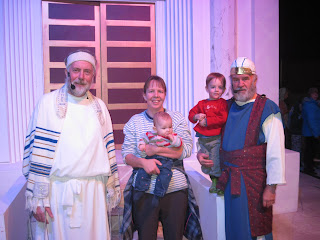 All night long we were told to ask about the new baby who had just been born and a few people asked me if Rachel was a boy and also if she was the new baby! I said NO! and No! (I thought the pink on her jacket would have answered the boy question?!?!?!) Eventually we did get to the place where the new baby was born. 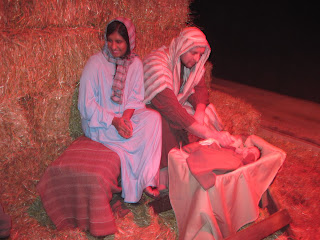 And there was an actual baby just staring up at the ceiling at 9:00 at night. I was amazed. Plus the spiritualness of the scene was overwhelming. Maybe since I've had two babies I am even more amazed that Mary gave birth in a barn. Surrounded by animals. I mean, have you ever really thought about that?!?!? And I'm thinking either Mary delivered Jesus by herself or Joseph delivered him. 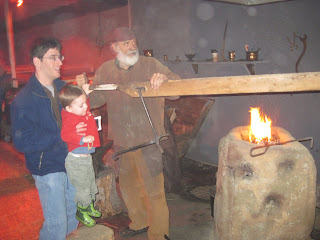 Then Sam got a chance to work the bellows at the Blacksmith shop and we headed out for hot chocolate and cookies. All in all, Dave and I were amazed and impressed. This walk exceeded both of our expectations and was really well done. I hope we can find something like this when we move back to KW. I know there is a Living Nativity which is also pretty neat but I really enjoyed this. I felt, for a few moments at least, like I was back in the Middle East. And I feel like I have a better idea of what that first Christmas might have been like.
Posted by Natasha at 12:03