We "Crossed" A Desert And Other Adventures

I was going to talk just about our "bonus" day in Whitehorse in this post but I only had about four pictures to share and, since the next day was epic, I'm going to start telling you about that day as well. 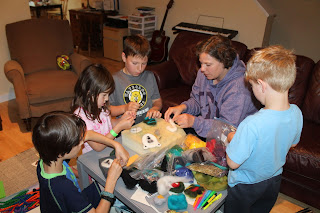 If you read my "What's Up Wednesday" post a couple of weeks ago, I mentioned that I was excited about needlefelting. (You can read that post here.) My friend, A, introduced us to it and we all loved it. You basically take wool, and using a special needle, stab it over and over and over again until it's felted. Even Sam, who is not usually into crafts, made a polar bear.

We spent our "extra" day in Whitehorse relaxing and going to the Beringia Museum. Beringia is defined as the land that the Bering Strait now covers (the land bridge between Russia and North America) and some of the land on either side. Where the Yukon now is was a part of that area and, because it was never covered by glaciers, it has some unique properties. 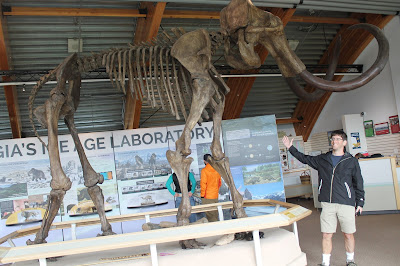 This is a woolly mammoth skeleton. We also learned that there used to be camels and lions in the Yukon area. These animals crossed back and forth on the land bridge between Asia and North America. It was wild learning about this stuff. We don't think of lions and camels as being natural in Canada but they were thousands of years ago! 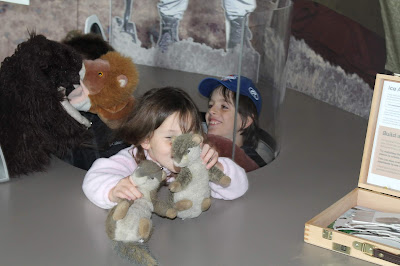 The kids put on a hilarious show about a woolly mammoth protecting some arctic ground squirrels from a lion. You can read more about Yukon's ice age animals here.
We then spent the rest of the afternoon swimming. Whitehorse has an amazing sports complex which was built for the Canada Games in 2007. Even Sam, who hates swimming, LOVED it. Our favourite area was the "lazy river" which I have put in quotation marks because A commented, "It's more like Class 2 rapids." It's a short swirl of a "river" and you can float or use a flotation device to move through it. I managed to stub my toe quite badly (it still hurts) being swept around a corner in this "river." We probably spent almost two hours just in the river, which gives you an idea of how fun it was.

The next day, all of us, except T who had to work, piled into our cars for a day trip to Skagway, Alaska. But we took the scenic route. 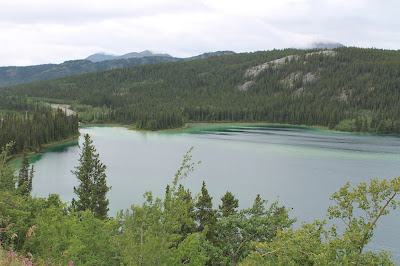 First up, we stopped at Emerald Lake. We also went down to the lake shore but the lake isn't as green from water level. 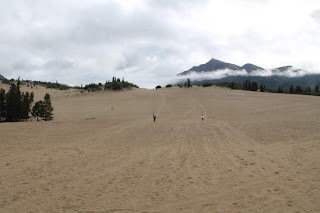 The Carcross Desert (considered the smallest desert in the world with an area of one square mile) was formed when large glacial lakes left silt as they receded. (Don't ask me how the Yukon didn't have glaciers but experienced the benefit of glacial lakes!). It is this really random, unusual piece of landscape in the midst of the forests, mountains, and lakes. 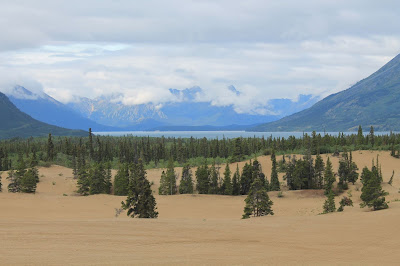 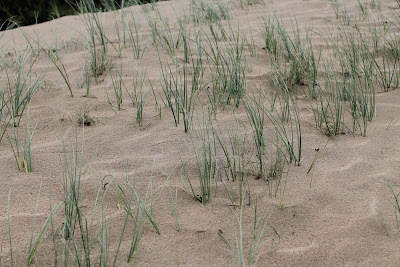 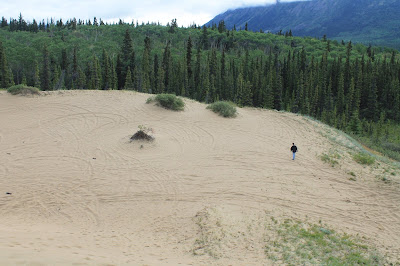 We had so much fun walking all the way across this desert and getting sand in our toes! 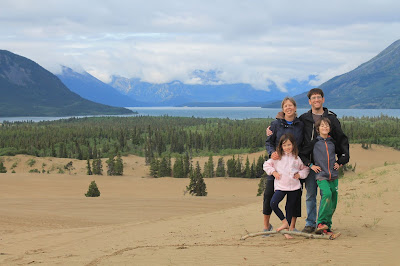 Rachel and I also enjoyed running down the big hill! 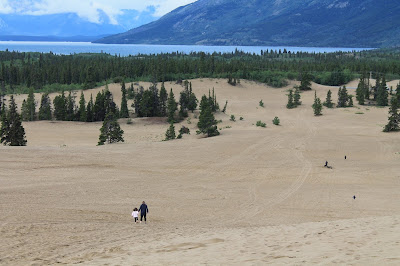 We stopped in the small town of Carcross (shortened to that from "Caribou Crossing") and I ate a white chocolate-raspberry scone which I am still dreaming about. It was delicious! We also got to see the famous White Pass Railway train roll into town. 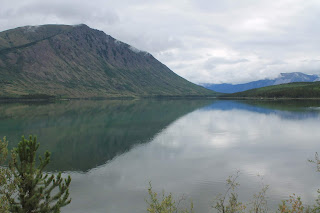 This was a gorgeous lake on the way from Carcross to Skagway. A said she's never seen it so calm. 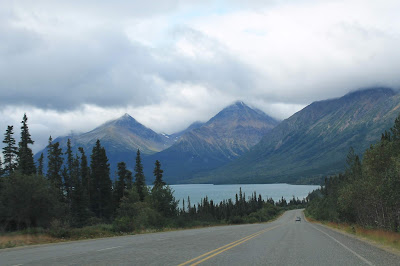 And just in case you've forgotten, the roads were completely deserted. It was so lovely to drive on these empty highways. That's A in front of us! 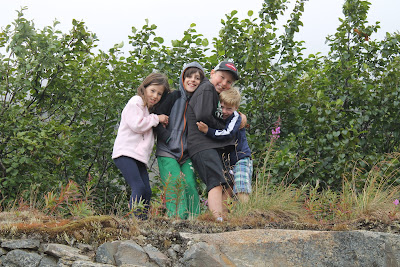 We absolutely took our time driving to Skagway so when the kids wanted a break to climb some rocks we let them. And then made them pose for a picture! HA! 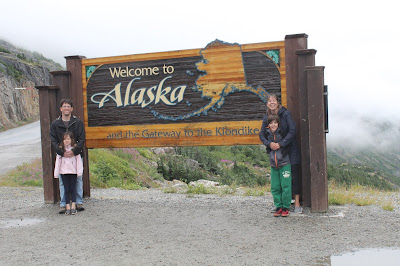 And once again, we made it to Alaska! 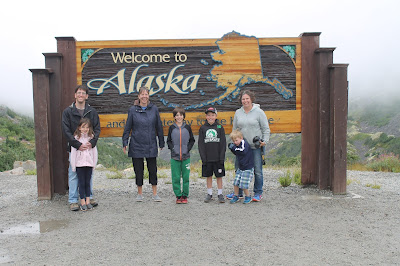 We are laughing in this picture because the night before A was telling us about the last time she'd gone to Skagway with her mother-in-law. They stopped at this sign and a random tour guide offered to take their picture. He then said to his tour group, "I've asked these lovely people to demonstrate how to pose for me." After he'd taken the picture, he drew a line for his tour group to stand behind. A described him as an "energetic leprechaun."

Well, we were taking pictures when a tour guide pulled up and offered to take our picture as a group. When we lined up, he called to his group, "I've asked this lovely family to demonstrate how to pose for me..." Yes, it was the EXACT SAME GUIDE. What are the odds?!?!?! He even drew the line!

So please, if you ever go to the Alaskan border between Skagway and Carcross, let me know if you happen to run into this guide. He's hilarious and might be a fixture!

Hopefully I'll be back tomorrow with the rest of our day in Skagway because it held one of the best surprises of our whole trip!