In Which We Discover That Canada Is Actually Really Big!

So yesterday I blogged "What's Up Wednesday" and filled you in on a bit of our trip but today I wanted to head back to last Tuesday and Wednesday and fill you in on the rest of our trip through Northern British Columbia and the Southern Yukon. This post will mostly be filled with a lot of pictures showcasing how the landscape changed as we drove further and further north. 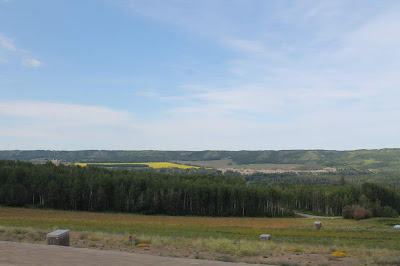 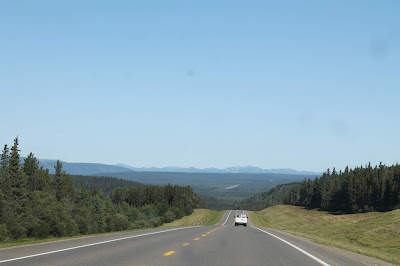 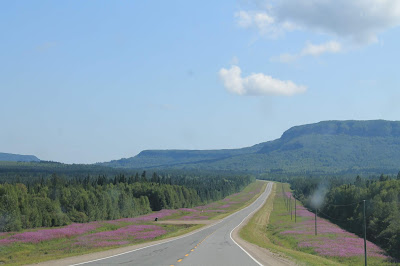 Two things to note from this picture -- the amazing fireweed blooming in the ditches. We saw this all throughout Northern BC and the Yukon. Also, please note the lack of traffic. It got so that Dave and I were calling two or three cars a "traffic jam." It will be culture shock to be driving with other vehicles on the road again. Ha! 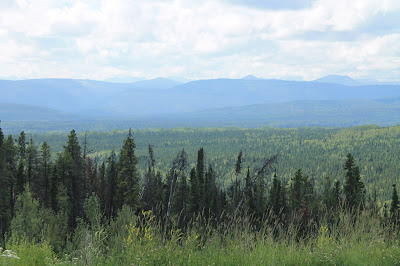 We also saw great swathes of forests. Oh my word -- these are just so beautiful! 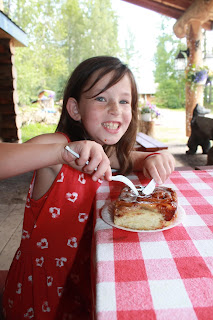 We stopped in Tetsa River, BC for the "world's best cinnamon bun." You think I'm joking right? Check out this article for reference: Cinnamon bun capital of the universe. I can confirm that they were fairly amazing. 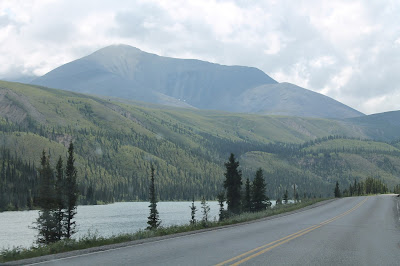 This was our first glance at Muncho Lake, BC. Although the town only has a population of 29 people, it is a major stop on the Alaska Highway. 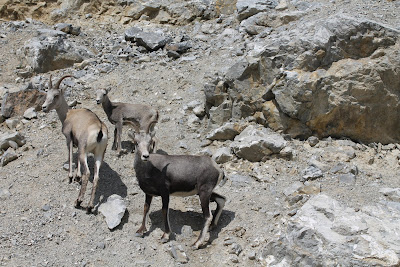 We saw what I thought were bighorn sheep, what Rachel immediately termed "rock sheep," and what we later learned are actually "stone sheep." Don't think Rachel hasn't been rubbing that in for a few days now! 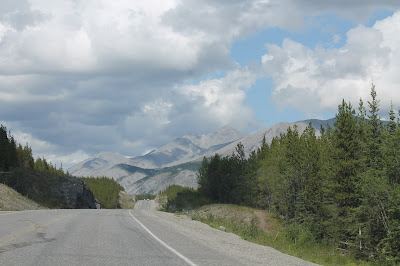 More of the Northern Rockies and the empty highway. I honestly don't know what Dave and I find more exciting. Ha! 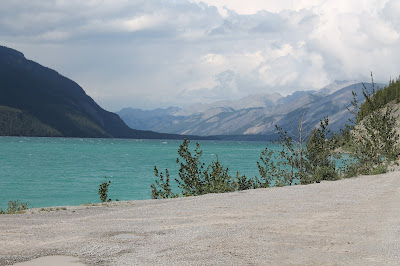 Another shot of Muncho Lake. We spent one night here on the way up and I'm actually writing this post during our second stay here on the way home. What a gorgeous spot to spend some time. 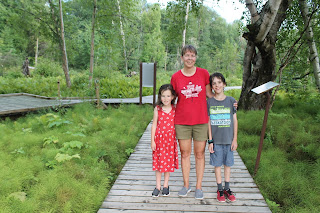 We couldn't make this trip without stopping at Liard Hot Springs. Have I already mentioned that the summer before I was in Grade 9 my grandparents lived in the Yukon so I drove up here with my dad, my siblings, and my aunt, uncle, and two cousins? I distinctly remember walking along the boardwalk to get to these hot springs. It was seriously so cool to be walking along the same boardwalk more than thirty years later with my two kids. 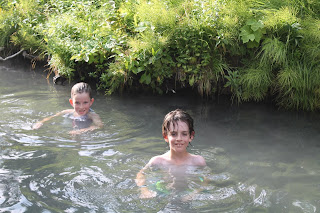 On the way to and from the hot springs, we had our first bear sightings. That evening after supper we went down to the lake and skipped stones. I should clarify that Rachel and I attempted to skip stones and Sam was actually quite good at it. 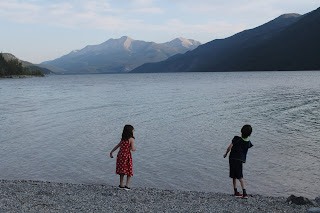 The next morning we woke up quite early and continued on our way. Sadly, the place we were staying didn't serve coffee until 7 and we left before 7. I was driving and it was two and a half hours before we came to our next town. 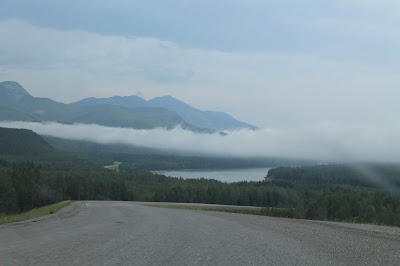 The clouds were so low they filled the valley. 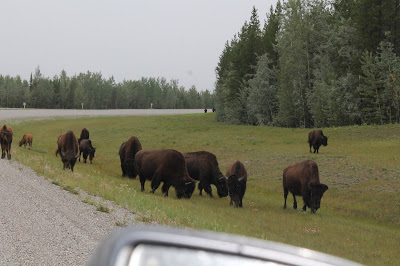 Then I had to navigate through a bison herd... 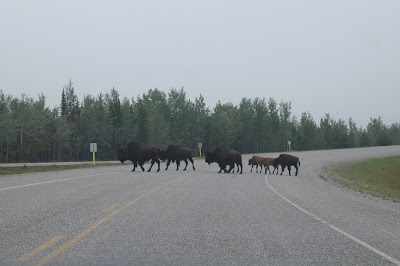 ... and they decided to cross the highway. Yikes!!! There must have been about fifty bison in this herd. 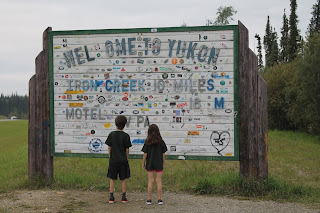 I didn't realize there were two Welcome To Yukon signs. The first one was fun as people had signed it. Of course, we left our own marks :) 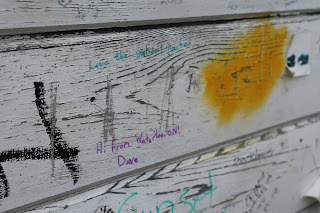 When we came to the official Yukon sign, Sam claimed, "I've seen enough Yukon signs in my lifetime" and didn't get out of the car. HAHAHAHA!!! 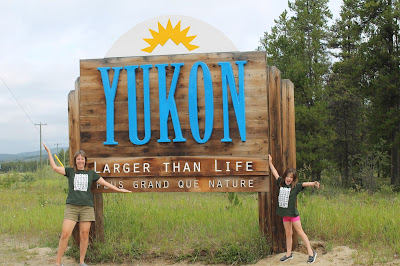 Then we stopped at the Watson Lake sign forest. I am just going to give you a small taste of this right now because it really deserves a post of its own. I'll just leave you with these teaser pictures! 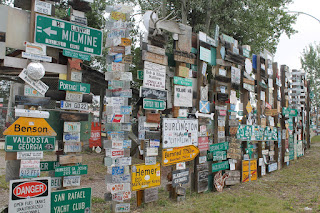 Yukon had fireweed everywhere and I still wasn't tired of it. 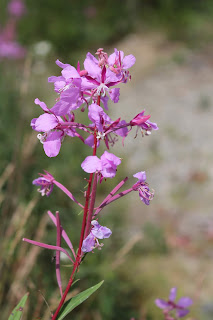 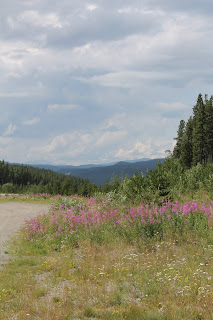 Then we saw two more bears. One of these crossed the highway right in front of our car. 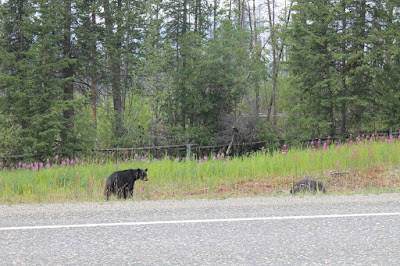 Our trip across Saskatchewan, Alberta, British Columbia, and into the Yukon reminded us, once again, that our country is quite large, has pretty amazing scenery, and is shared with more creatures than we normally think about.

Hopefully by tomorrow I'll have been able to write a post about either a) the Watson Lake Sign Forest or b) our first day in Whitehorse. Both of these things were fairly amazing!