"Plan H" Is For Harbours, Hammers, and Haines

The last time I blogged, I was in Alberta, and we had about a week of vacation left. Now we've been home for a little less than a week and I still have about two weeks of vacation to tell you about. I'd better get on that :)

First though I have a few blog-keeping notes:

1) While I definitely took a photo a day on our trip, I am going to skip my Daily Photo 2019 posts for this vacation and I will not be posting my current ones until after I'm done blogging about this trip.

2) While I had planned on blogging about every week of summer, again, those posts would be redundant with our vacation posts so I'm skipping weeks 4, 5, and 6 of summer.

With all that in mind, on to Haines, Alaska. If you need to catch up, you can read my previous post here. Our original plan was to spend only one night in Haines, but we were able to book another night and set out to explore.

The first night we ate supper and my friend, A, and I tried to find out if we could book other transportation to Juneau. We found a boat which would take us there but we'd have to stay overnight, and since we had just cancelled our accommodations, that didn't feel like a viable option. We gave up on getting to Juneau and decided to just enjoy being in Haines. 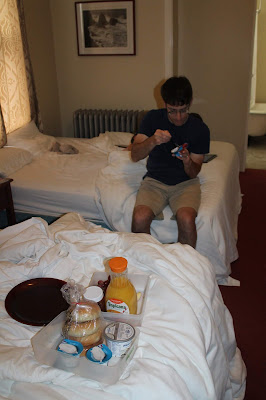 I took this picture because we had packed some food for breakfast and lunches and our friends had the cooler in their room. There was a knock on our door the next morning and a call of "room service" and it was our friends bringing us breakfast. We laughed so loud and were so appreciative! 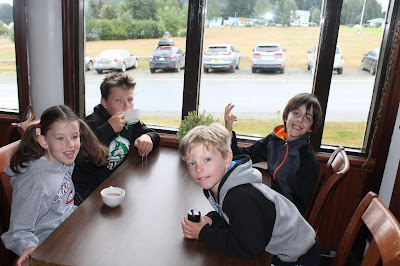 Our hotel had free coffee and pastries, and I traveled with my own hot chocolate, so we all enjoyed a warm drink in the hotel breakfast room. 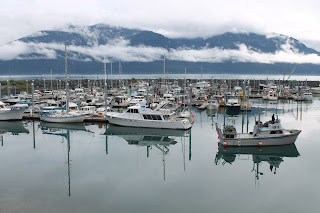 Haines is basically laid out with the harbour as its end point. And surrounding the harbour are mountains. It was a gorgeous view which we could see from our hotel. I could have spent hours here and was glad we got to walk by it so often. 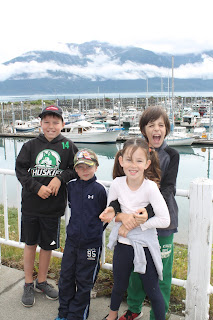 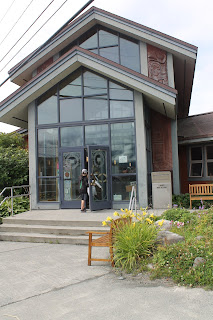 I'd heard that the Haines library was not to be missed, and I would agree. Considering how small Haines is, the library was amazing! We spent about an hour here. 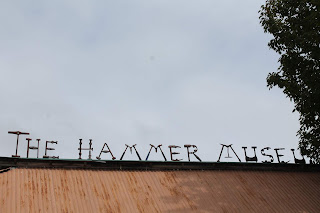 Another "not to be missed" Haines attraction is The Hammer Museum. It was super fun and quirky and we loved it! It reminded me of The World's Largest Ball of Twine (see here for when we visited that) but I think I liked The Hammer Museum more. 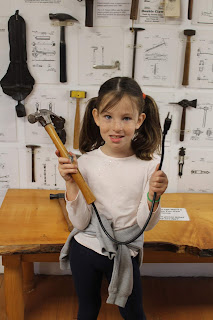 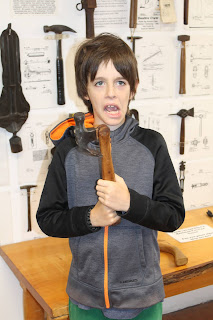 We weren't allowed to touch most of the hammers with a few exceptions. Rachel hoped the electric hammer was a serious invention and Sam was skeptical of the bendy hammer. 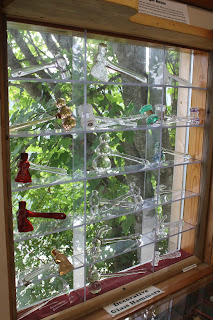 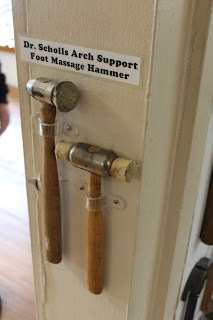 I loved all the "art hammers" they had on display as well as the "foot massage" hammer. 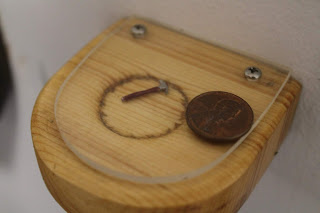 The hammer which is smaller than a penny was amazing and I also loved the hammer "swing" which Sam is checking out. You pushed one of the hammers and eventually they were all rotating. I would highly recommend checking out The Hammer Museum if you make it to Haines.

The reason the ferry workers picked this particular time to go on strike was because Haines was hosting the Southeast Alaska State Fair which was one of the biggest events of the year. Due to the strike, the fair was pretty empty, but we enjoyed checking it out. 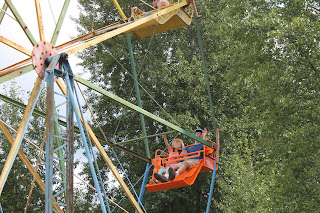 Sam and J enjoyed this game. They played it quite a few times. J almost always won so the one time Sam knocked J off, we all cheered madly! 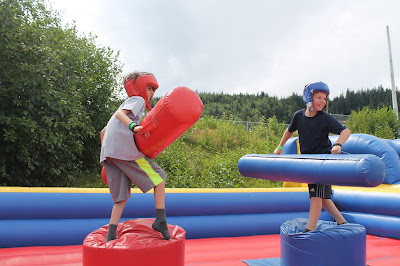 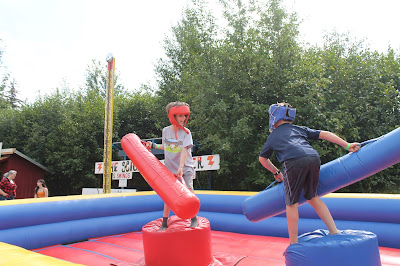 I LOVED the wearable art exhibit. The "Safe Art" dress was made of 5,000 puzzle pieces glued to another dress, and the wedding dress/flames art was made by a woman whose engagement was called off weeks before the wedding. It reminded me of Katniss' dress from "Catching Fire." 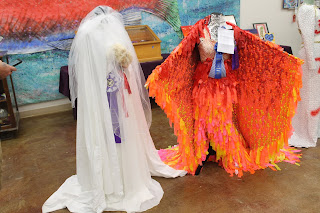 That evening we took some more pictures of the Haines Harbour after supper. We kept joking about getting the "1,000 piece puzzle shot" and I think this might have been the winner. Wouldn't this be an AWESOME puzzle?!?!? 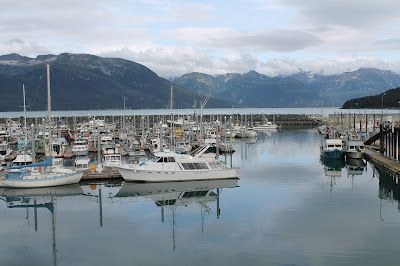 Then A and I sent the kids back to the hotel with the dads and she showed me this funky, deserted, art space. It was half art, half construction site and we were both so intrigued by it. Also, there was no description of what it was. It turns out I took no pictures of the "construction site" aspect of it but imagine all this art among random pipes, bags of cement, and broken bricks. 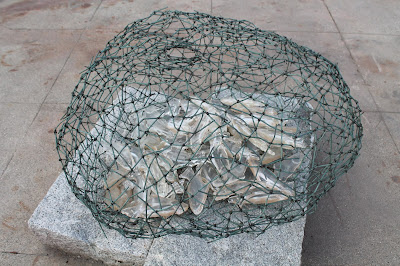 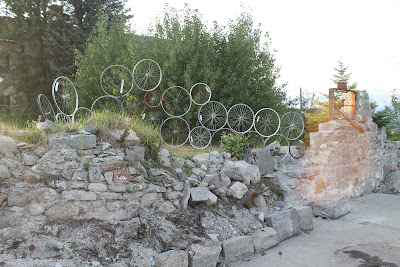 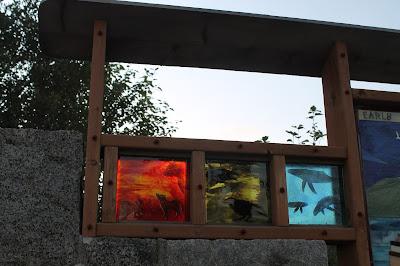 The next day we stuck around for the Fair parade. It was about ten minutes long and hilarious! 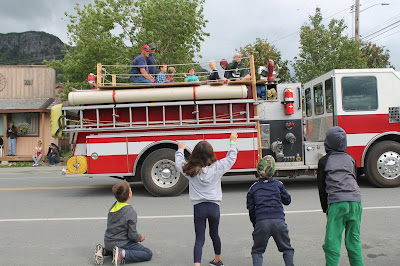 The kids enjoyed catching candy and we never did figure out if the silver things below were sharks, salmon, or a spaceship! 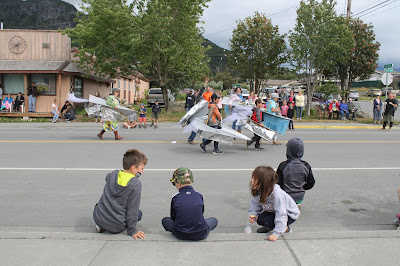 Then we headed up to Chilkoot Lake State Park for lunch. We ran into a fisherman who had just caught an Alaskan Salmon. He allowed the kids to hold it but Rachel was only brave enough to hold the tail! This is also the spot where we watched salmon jumping and flipping their way upstream to spawn. It was incredible and I could have stayed here for hours too! 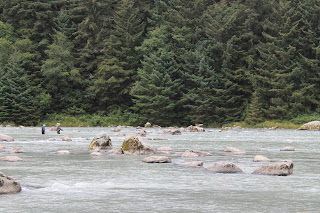 Then we headed back to Whitehorse. We enjoyed our time in Haines and I think we managed to make the most of Plan H!