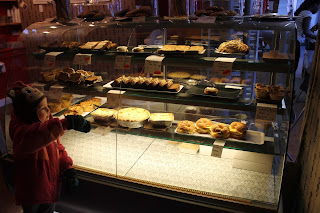 Last Tuesday, Rachel and I checked out a new bakery which opened near our house recently. Rachel was excited to go back on Saturday morning and get our breakfast there.

We also picked up a baguette for our supper that night. I felt very French walking down the street carrying a baguette. 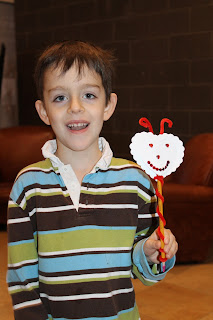 We went to a Kinderconcert next and Sam made this adorable Love Bug during the pre-concert activities. Then he set it in a hole near his arm rest so it could watch the concert and I just about died from the cuteness. 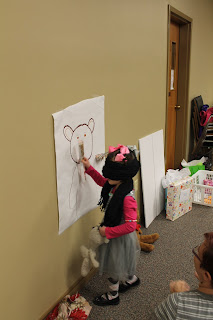 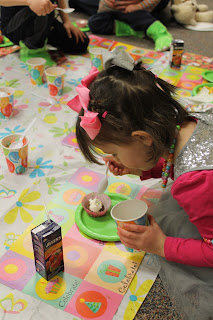 In the afternoon Rachel and I went to the birthday party of one of her friends from church. We had a great time at the Teddy Bear Picnic. Above you can see Rachel "Pinning the necktie on the Teddy Bear" and decorating her cupcake. And if you don't follow me on Instagram, you may not know that lately Rachel considers "three braids and three bows" the height of fashion. She's only going to be this age once so I don't fight her too much on it. 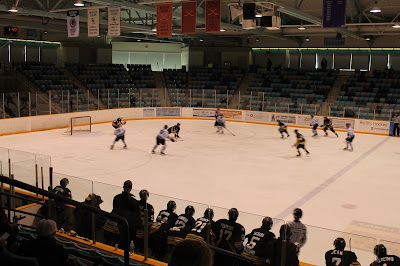 Sunday we finally made to a Siskins' game. We were so excited. We made a bit of a treat out of it and the kids got to participate in Chuck-A-Puck (the four pucks closest to the centre won hockey sticks) and we bought them a Siskins Sundae which they thoroughly enjoyed. It was so much fun.

And then we came home, had eaten supper by 5:30, and were wondering why we were so exhausted. Ha!

And that was our weekend.
Posted by Natasha at 08:22