Before I share my February goals with you, I thought we should check in with January, so here goes...

1) Throw Dave a birthday party and work on getting his present arranged. 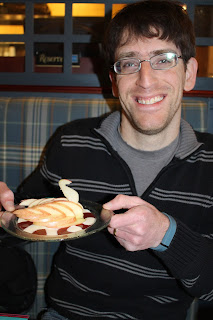 I did throw Dave a birthday party and I think he enjoyed it. There was beer and cheesecake so it counted as a win! Read more about Dave's birthday weekend here.

I got our piano fixed (the sustain pedal was broken) and tuned as a birthday present for Dave. Due to some timing issues, it didn't happen in time for his birthday but it is done. And now we can play beautiful music again. Yay!

2) Get our Christmas/holiday cards sent out. Dave did an awesome job and had his all sent out by the first week of January. It took me a little longer but I can finally say that, as of last week, I am done. Some of you may even have received them in the mail already. I hope they brighten up your January February. Ha ha ha!

3) Get our yearly calendars done, which also means I have to go through all of our photos from this past year so I might as well add... The calendars are ordered and on their way. This feels so good to have off my plate and pretty soon I can stop being wrong on all my dates because my wall calendar won't be stuck on December.

4) Print out pictures from the past year. This is also done. Whoo hoo!!! I went from 176 picture folders to 26. That felt really good. And the kids have enjoyed looking at the photo album.

5) Go though the playroom and our bedroom. Clean them up. Get rid of things. Even though we had already gone through the playroom when I posted it, I still count it as a January goal. The kids have really enjoyed playing in there this month. Sadly, I never really did get through our bedroom but honestly, it doesn't collect as much useless crap random stuff as the rest of the house does. 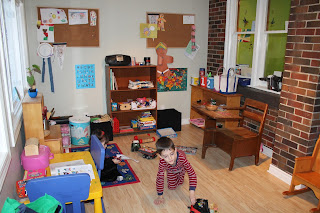 6) Cut back to one Coke every other day. I'm so proud of how I did on this goal. I had about eleven cans of Coke for all of January and only once did I have two in one day (the day of Dave's birthday when I had a cold and really needed some extra energy). And there was only once when I had a Coke two days in a row. Plus, my "lack of caffeine" headaches disappeared after about five days so that was a major bonus.

Now that I've managed to cut back a little on caffeine, I want to continue in a positive direction so we'll see how that goes.

7) Get a thank you card to our neighbour for the slippers she made all of us for Christmas.
8) Send out (really late) birthday and Christmas presents to our nieces and nephew. I'm lumping these two together because We. Got. Them. Done!!! And there was major rejoicing. Honestly, I may have done a little happy dance.

9) Have a really great, and relaxing, time at our church's winter retreat. We definitely did this and you can read about it here. And here :) 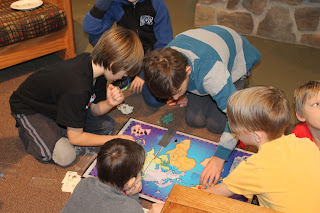 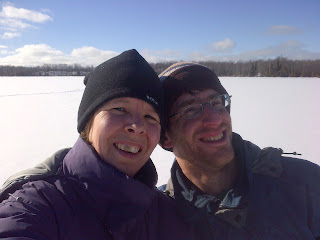 10) Go with the whole family to a Siskins' game. We haven't been to one in a few months and I'd like to go again soon. Sadly this goal did not happen. Church ends at noon (usually) and Siskins' games start at 1:30 so normally there's a ton of time to get to one. However, the one Sunday we could actually go, church went (extremely) long, and as Dave and I had both had parts in the service, people wanted to talk to us afterwards. So we were too late to get to the game. We were all really disappointed. However, this is going back on the list for February.

11) Have a fresh bouquet of tulips in the house all month. This was such a happy goal to have. I'm doing a whole separate blog post on Friday to highlight all my tulip bouquets from the month.

I felt really good about how things went in January. And it was fun to look back on my original post and remind myself of what I wanted to accomplish. I really like the idea of making monthly goals, rather than New Year's Resolutions, because it allows me to get a chunk of things done and then think about the next chunk.

So tune in tomorrow to read what's happening in February...

Are you a full year's resolutions kind of person or does the idea of monthly goals appeal to you too?
Posted by Natasha at 08:10