May 23, 2017 -- If you're visiting from Momfessionals today, welcome! Thanks for stopping by. As you can see in the first paragraph, I've had the opportunity to have quite a few memorable vacations. I have to say though, that this one with my dad, remains a HUGE highlight :) I wrote this post as part of a 30 Week Writing Challenge I took part in from 2015-2016.

This week's (last week's?!) challenge made me realize how fortunate I have been in traveling. One of the advantages of not getting married until I was 36 was that I was able to indulge in my love of traveling. When it came to picking my most memorable vacation, it was a little difficult. After all, should I write about my and Dave's first trip to Europe in the summer of 2007? Or how about our trip to Vienna with Tim, Janice, Tessa, and Willem in May 2010? What about my and Dave's kid-free vacation to New Zealand last year? And our Southern Road Trip this past spring was pretty memorable too!

However, I decided to pick a trip I hadn't blogged about before. In the summer of 2004 my dad and I took the Trans-Siberian Railway from Beijing to Moscow, through Mongolia. Then we added a side trip to the Ukraine to visit the area where my dad's parents lived before they emigrated to Canada. 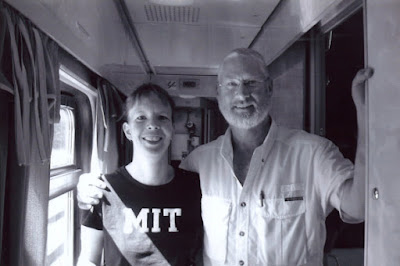 Dad and I on the train, somewhere in the middle of Russia.

One of the (many!) cool things about this trip was that I took my dad on it. Between the ages of 25 and 30 I lived in a house which I owned with eleven other people. When we sold that house, we were all left with quite a good nest egg. As my dad and I had been dreaming about this trip for quite some time, I decided to use my nest egg to take us, because why save for a rainy day when you can travel?!

I flew from Toronto to Vancouver, where Dad and I met up. Then we flew to Beijing. We spent two nights and one day there and we went to the Great Wall. It was a really hot day, and we were jet lagged, but it was so cool to visit. We tried to visit The Forbidden City but we got there about ten minutes before it closed and they wouldn't let us in. Boo. 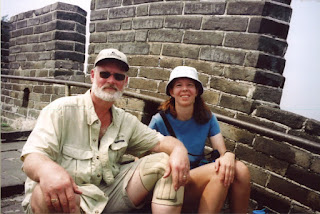 Dad and I on The Great Wall during an extremely hot and muggy day.


The next morning we got on the train for twenty-four hours and took it to Ulaan Bataar in Mongolia. We spent two nights and two days there. I was shocked that edelweiss are a symbol of Mongolia and they were everywhere. We rode camels and visited a family who lived in the countryside. We got to sample arag (the local Mongolian homebrew) and other horse food products. The butter was the best thing I've ever tasted. Yum! I also remember eating a Mongolian "vegetarian" meal of fried potatoes and carrots topped with french fries! 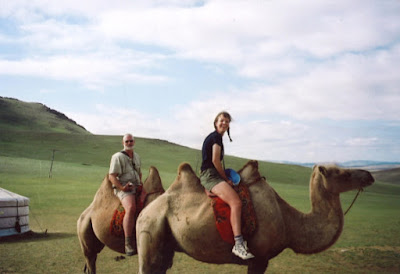 Then we got back on the train for another 24 hours and took it to Irkutsk on Lake Baikal in Russia. Sadly, it was super foggy the day we visited the lake so we didn't see much of it. I remember loving the decorative wooden houses in Irkutsk. And I think that's where I ate the best shrimp meal I've had in my entire life.

After we left Irkutsk we were back on the train for three straight days and nights. The train would stop for short periods of time (I think the longest stop was 20 minutes) and the train almost left without us in Novosibirsk. Those three days were a little intense as there weren't showers on the train! I spent a lot of time reading and looking out the window.

Thankfully we had amazing train mates (there were four to a compartment) and we shared a compartment with Dave and Alex from Ulaan Bataar until Moscow. They were from Australia and so fun to travel with. I ended up going to visit Dave and Alex in Ireland for St Patrick's Day the following March (another memorable vacation!).

After 7,835km (4,868 miles) we finally got off the train for good in Moscow. We spent a few days there and went to Red Square, St Basil's Cathedral and did some shopping. I bought about a million sets of matryushka dolls. I just LOVED those things. 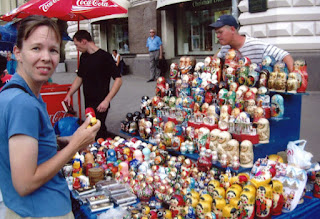 Then we flew to Zaporozhye in the Ukraine and stayed with a local family who knew all the history of the Mennonites (my denomination) in the area. Both of my dad's parents were born in the Ukraine and left for Canada in the 1920s. We found out during our visit that my great-aunt (my grandpa's sister) and my dad's cousin from Germany had visited this family earlier that summer so Viktor was able to share some of my great-aunt's recollections from being a small girl there as he toured us around. 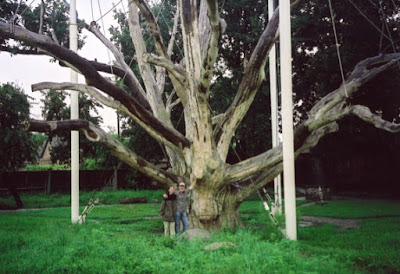 Dad and I under a famous (sadly, mostly dead) oak tree in Chortitza.
My grandpa talked about playing under this tree as a small boy. 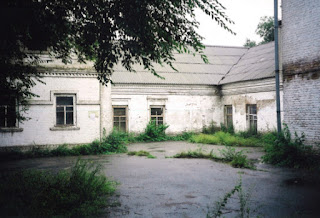 My great-grandpa's lumberyard
It was still being used as a woodworking shop.

After we left the Ukraine we flew to Vienna, Austria, where we had a brief layover, and then flew home. Two and a half weeks after we'd left, we returned home having circumnavigated the globe (another cool aspect of this trip), seen many amazing things, had once in a lifetime experiences, and met a lot of interesting people.

And that was my most memorable vacation.
Posted by Natasha at 08:01