Our Weekend In A Very Few (Not Very Good) Photos

With a riveting blog post title like this one, I'm surprised any of you are tuning in to read this! Also, I've decided, after discovering that I've only taken about 43 pictures in the past two weeks, that I am going to do another Project 365 next year. Weeks have gone by this year where I take barely any pictures and I miss it.

And while I'm at it, I can't believe I didn't post anything after Tuesday last week. All of a sudden it was Thursday night and I was like, "Oh yeah -- I should write a blog post" but I didn't have time and then the week was over. Gah.

On Friday night we all went to a birthday party for one of the kids' friends. It was at a play place and it was insane. Not to mention that it followed a PD day where Sam had a seven hour long play date and Rachel was at her dance studio for seven hours for their PD program. So both kids were exhausted and the craziness of about one hundred kids climbing all over the play structure became rather overwhelming. 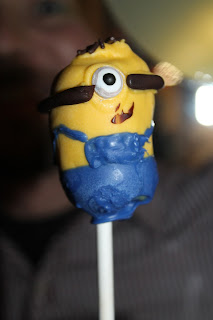 However B's mom made these super cute minion cake pops so I had to get a picture and B's dad photobombed it! 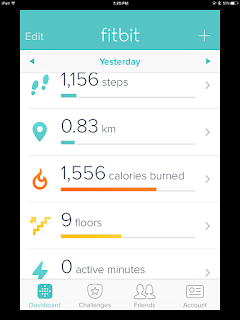 On Saturday, perhaps in reaction to the play place insanity, my body decided to throw in the towel. I felt supremely awful with a headache, my cold:part 1,257, and lack of energy. I spent the entire day in bed or on the couch, napping and reading. My FitBit shows a grim picture of my day. 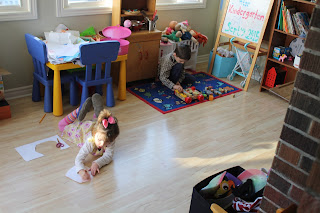 Sunday morning I woke up feeling much better and we went to church, for Sunday School at least. Then we came home and got caught up on chores which didn't happen on Saturday. I love that the kids just hang out in the playroom. This room is everything I dreamed it could be when we bought this house. 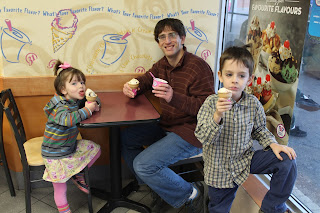 Sunday afternoon we ran (walked!) a few errands, and decided to enjoy some ice cream. I was so glad to be feeling so much better and we just had a really great afternoon. 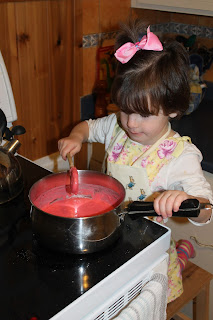 I'm on the playdough rotation for Rachel's class at school this week so she helped me make some pink (of course!), cherry flavoured playdough. 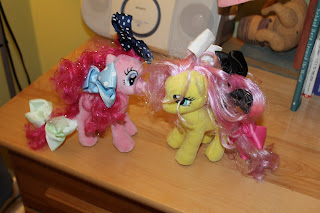 And finally, for those of you who remember Rachel's epic tantrum of last week, we realized she still hadn't spent her birthday money so Dave took her back on Saturday and she had enough money to buy two ponies!!! And then she quickly bedecked them with bows. We may have come to this whole bow party a bit late, but even Rachel has embraced it with gusto!

And that was our weekend. And now we have plans for the next seven nights in a row so we are definitely going into survival mode around here. Yikes :()
Posted by Natasha at 08:03