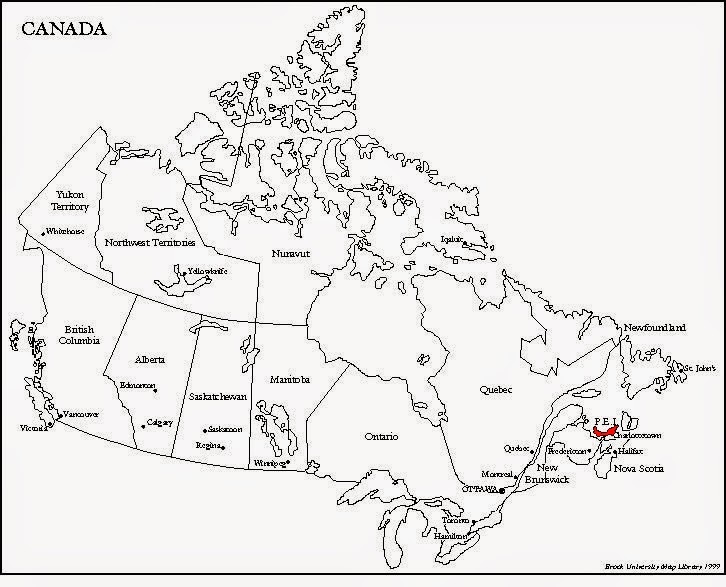 So after a (too) long hiatus, Traversing Canada Tuesdays is back! Whoo hoo!?!? Anyways, today you will get to find out about Canada's smallest province, Prince Edward Island. On the map above, it is the small red spot in the lower right hand corner. If you are an Anne Of Green Gables fan, you may have heard about this province. Yes, this is where the Anne books are set. But PEI (as we call it for short) is about so much more than Anne.

PEI is only 224 kilometres (139 miles) long and as narrow as 6 kilometres (less than four miles). It is Canada's only island province, and for the longest time the only way to get there was by a 75 minute ferry ride. However in 1997, the 13 kilometre (8 mile) long Confederation Bridge opened, and now you can drive to PEI in 10 minutes, crossing the Northumberland Strait.

Because PEI is flat, with no large landforms to stop the wind, it is often breezy on the island. It is also the fourth snowiest province in Canada. PEI was once connected to the mainland, but after the last ice age, around 10,000 years ago, the Northumberland Valley filled with water, cutting it off from the rest of Canada.

Even though it is only 224 kilometres long, PEI has 1107 kilometres (688 miles) of coastline with the majority of that (800 kilometres (497 miles)) being beaches. The north shore boasts mainly white sandy beaches, while the beaches of the south shore are lined with low, red sandstone cliffs. PEI is known for its red, sandy soil. About half of PEI is covered in forests, while the other half is farmland. 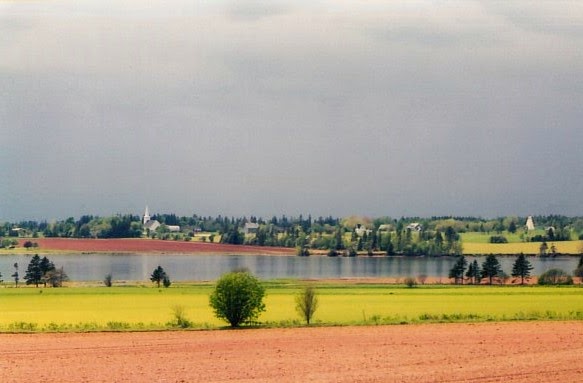 Much like Nova Scotia, control over PEI switched back and forth between the French and the British. In 1758 it finally became a British colony. However, problems between landlords in Britain and settlers on PEI, finally caused the settlers to revolt and consider joining Confederation. In 1864, representatives from the colonies of Nova Scotia, New Brunswick, PEI, and the Province of Canada (now Ontario and Quebec) met in Charlottetown, PEI to talk about joining into a union. That meeting is now known as the Charlottetown Conference and the city is know as the "cradle of Confederation" even though PEI decided not to join Canada on July 1, 1867.

In 1873, Canada promised PEI money to buy the land from the British landlords. It could then be sold to the Islanders, some of whom had been farming the land for generations. PEI accepted the offer and officially became a part of Canada.

About 147, 000 people live on this small piece of land and many of them make their living from the ocean or by farming. If you ask a Canadian what they think of when you say, "PEI," besides Anne, they will answer, "Potatoes!" Since the soil on the island comes from sandstone, it is slightly acidic and rich in iron. When the iron is exposed to the air, it rusts and that is why the soil is red. It is ideal growing conditions for potatoes. PEI produces between a third and a half of all potatoes grown in Canada each year.

Since PEI boasts one of Canada's windiest spots, the North Cape, it is also one of Canada's leaders in using wind as a renewable energy source. And of course, there is the ocean with its abundance of lobster, among other seafood. 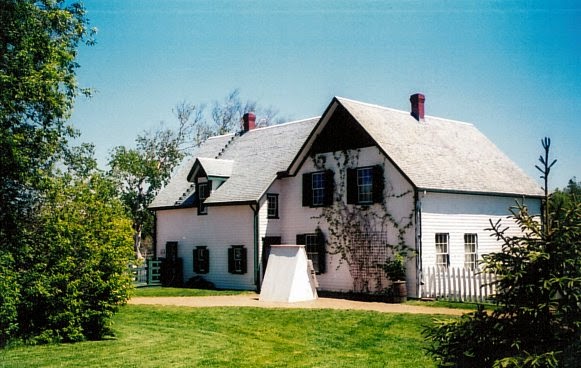 If you ever get to PEI, you have to stop at Cavendish, and the farmhouse that inspired Lucy Maud Montgomery to write "Anne Of Green Gables." Tourism is a booming industry on the island, and surprisingly, since Anne is so well loved in Japan, many of the tourists are Japanese.

Other points of interest on the island are The Bottle Houses, made up of over 25,000 recycled wine bottles, and the Singing Sands on the beaches at the eastern end of PEI. 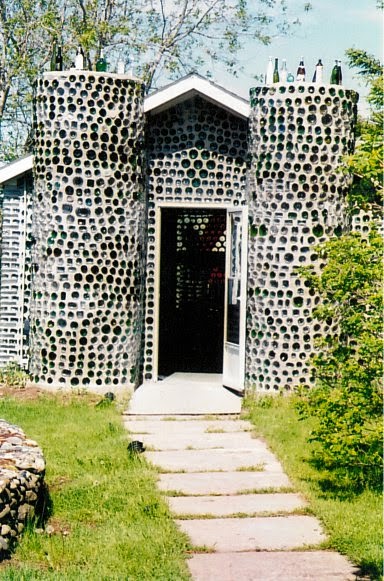 Dave and I are hoping to do an eastern Canada road trip with Sam and Rachel in a few years, and I know that we will enjoy our stay on PEI. I can't wait to go back!