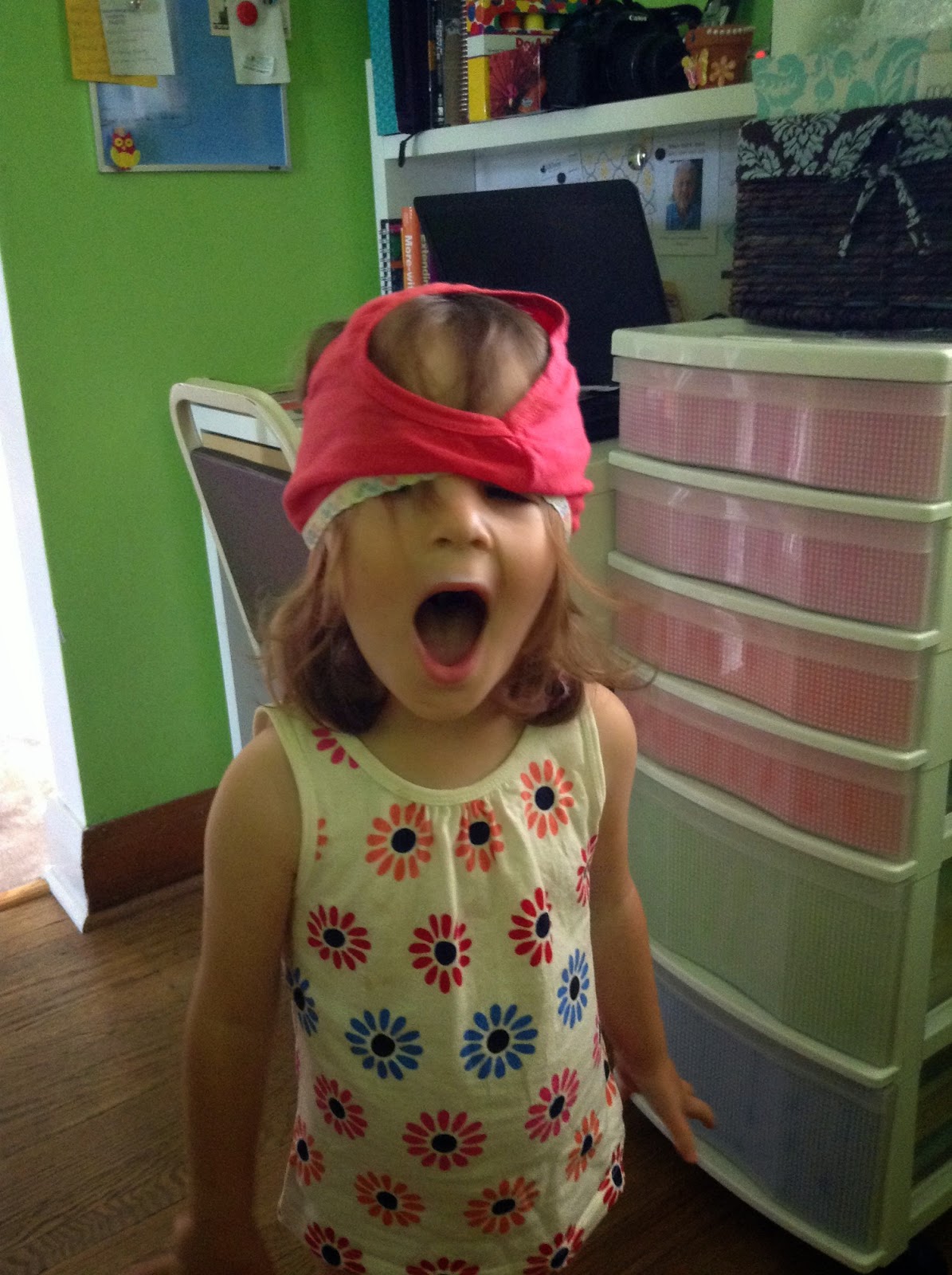 For about three months we had been planning on going to New York this past weekend. Those plans fell through about three weeks ago, and so we (really, "I") decided that it would be a good weekend to attempt to toilet train Rachel. I wanted three days in a row where we could basically stay home and where Dave would also be available. And then we ended up having supper plans Every. Single. Night. Since Rachel has not been super consistent about peeing in the potty, we weren't sure how it was going to go.

I began on Friday afternoon at 2. Willem came over for the afternoon and entertained Sam, which was awesome. Since I didn't want to just hang out in the kitchen (scene of the crime), I also decided that Rachel and I would work on her letters. Just so we had something to do! 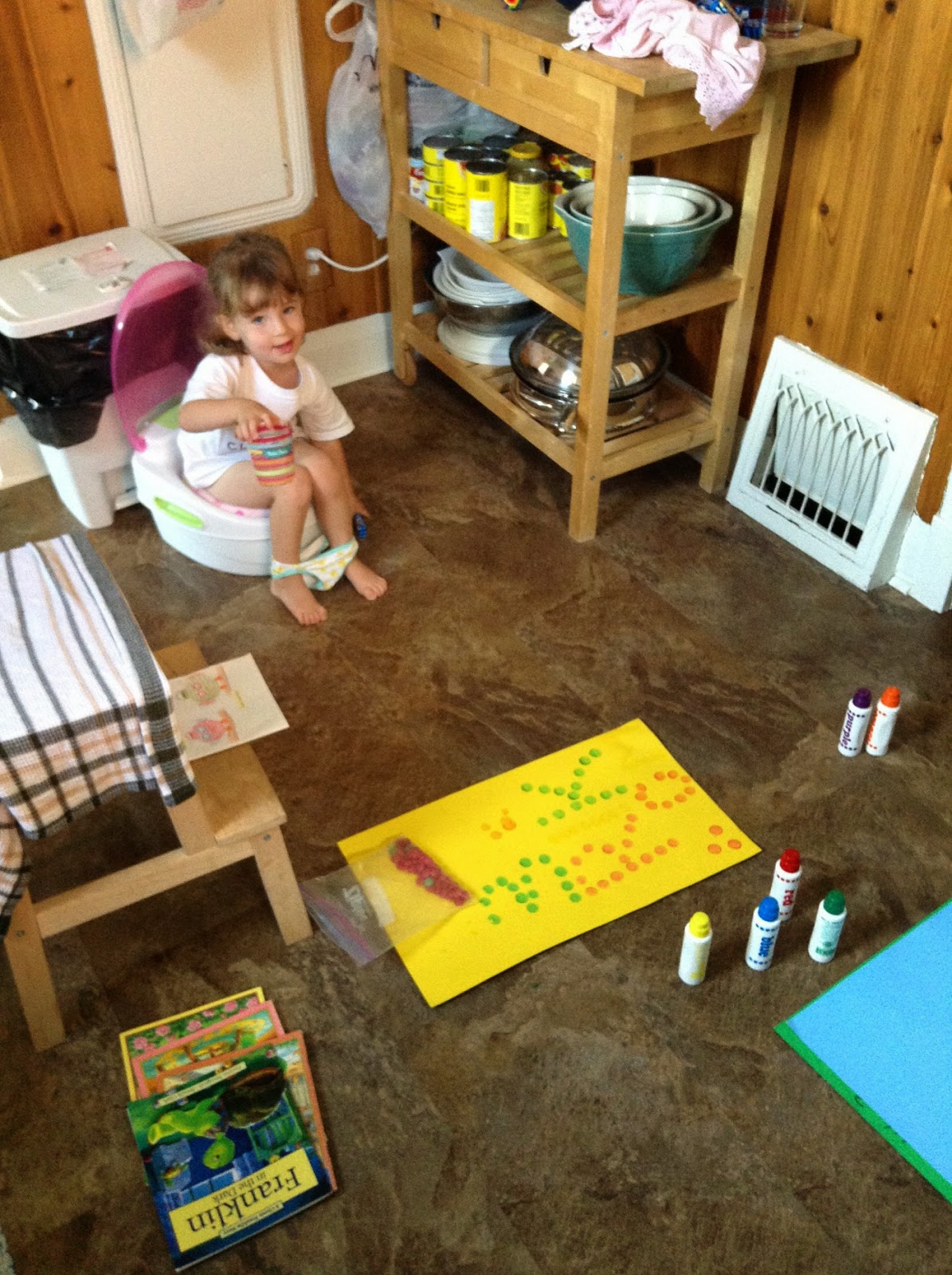 I plied Rachel with lots of juice, she got a Smartie every time she sat on the potty, and she wore underwear the whole time. She finally peed after about an hour and a half. Then we had to head out for a little bit so I put a pullup on her.

She ended up having a couple of accidents on Friday (one with regards to pooping), but by Friday night she was announcing, "I have to pee!!!" and running to the potty and peeing on it. It was pretty awesome. Tim and Willem came for supper, and Rachel fell asleep on Dave's lap at 7:30. I think she was pretty exhausted.

Saturday morning Rachel woke up with a dry diaper and I hurried her downstairs (at 7:15am, without wearing my glasses or putting my contacts in) to try and convince her to pee. I took this picture and in my sleep deprived state I couldn't figure out why the camera wasn't focusing properly. After a few minutes, I realized that the camera was fine but I wasn't focusing properly. Ha! 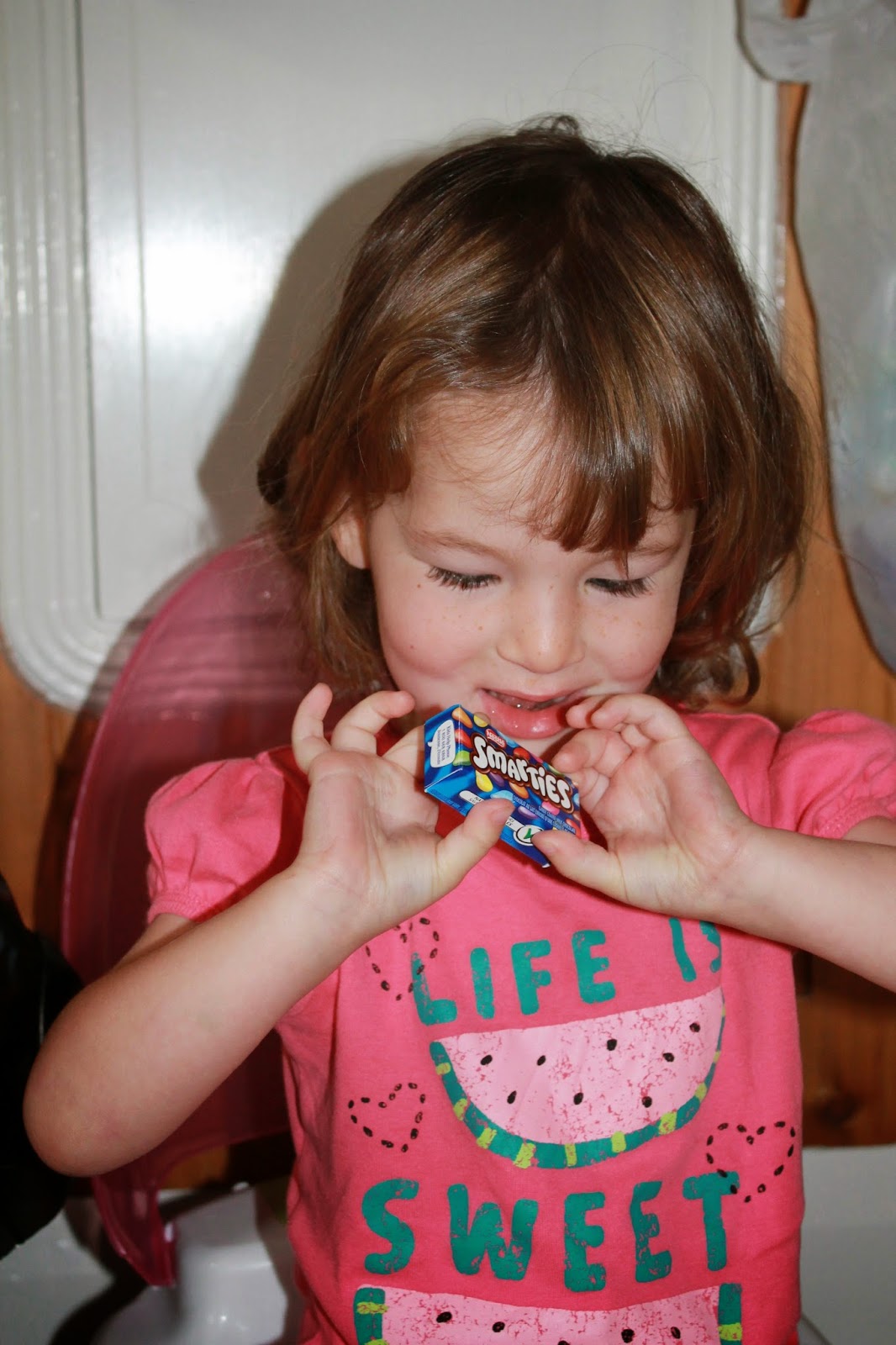 After that exhausting interlude, I crashed on the futon in the office, Sam played, and Dave and Rachel continued to focus on keeping Rachel's underwear dry, more or less successfully. 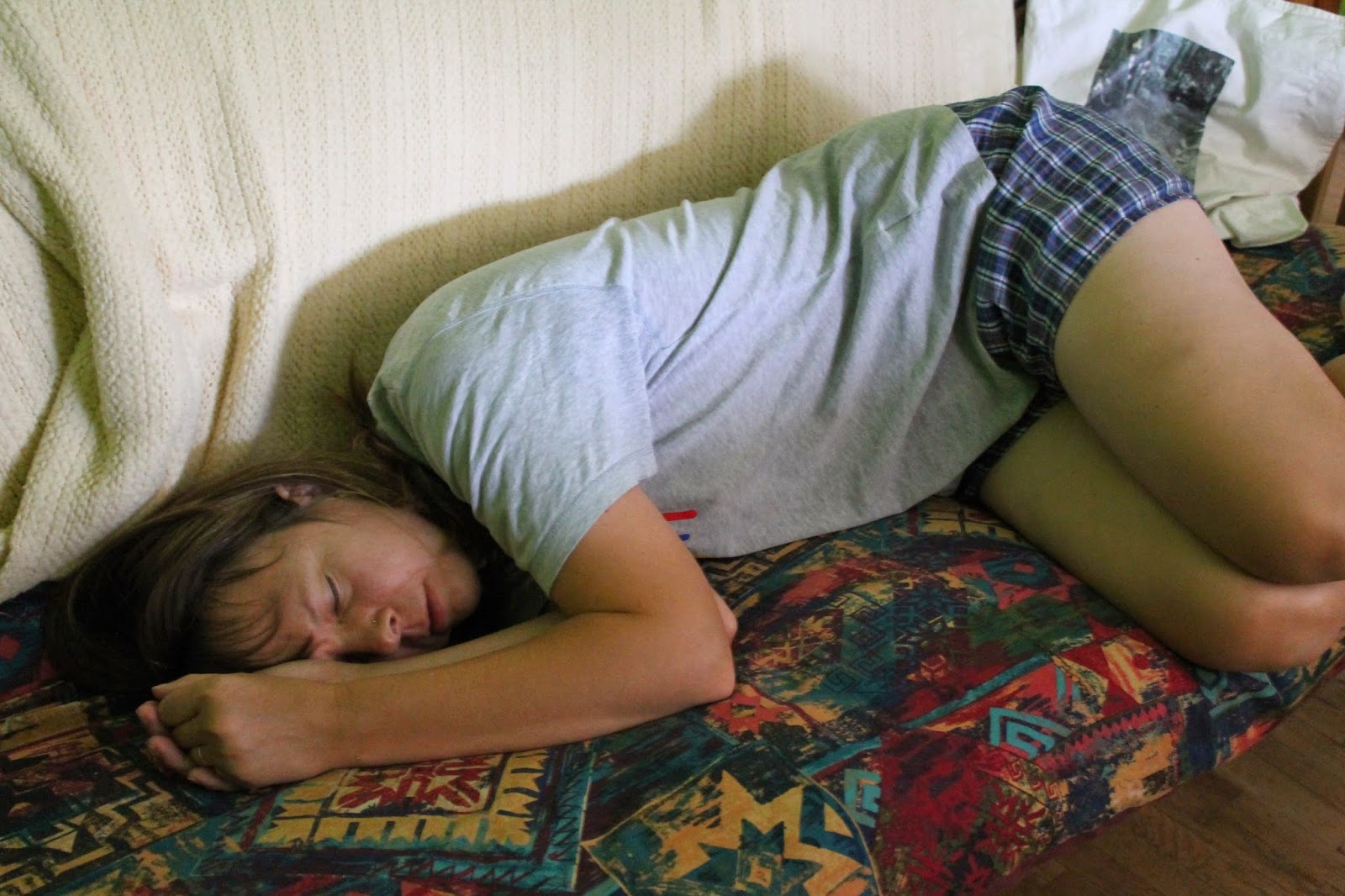 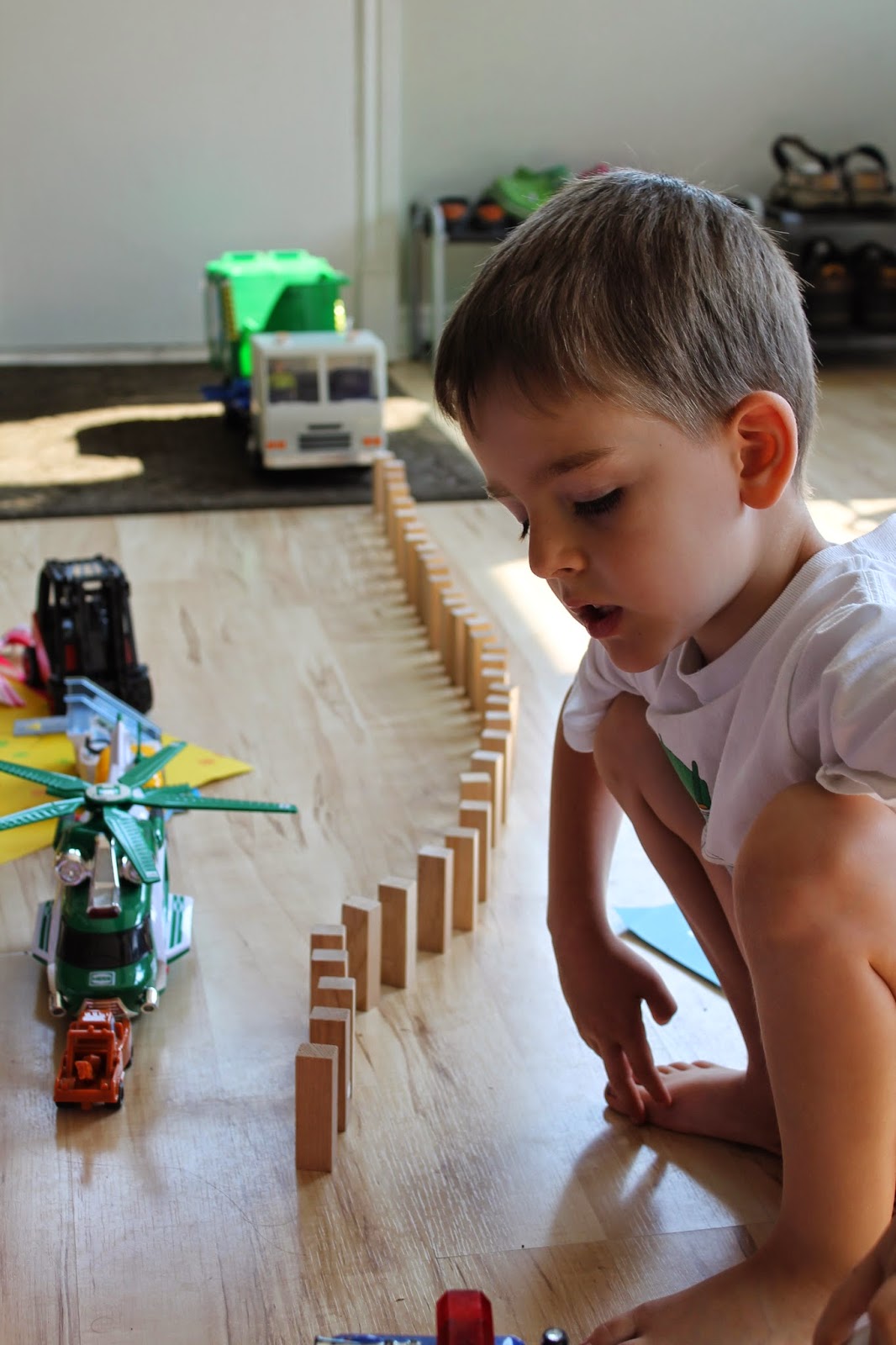 Rachel did have a few more accidents but I would say about 80% of the time she was successful on the potty. That afternoon we worked some more on our letters.

On Saturday night our friends Julie and Saskia came over for supper and that was tons of fun! Rachel conked out around 7:30 again.

Sunday we hung around here in the morning and then went to our friends' house for supper. Rachel wanted to bring her potty along and so I told her to pick it up. Unbeknownst to Dave and I, she had peed in it earlier and sadly, got kind of wet when she picked it up. The major highlight was that not only was she peeing on the potty, but she was doing it of her own accord.

Although we had her sit numerous times at our friends' house, she didn't pee the entire six hours we were there. And yes, she had a lot to drink. So we put a pullup on over her underwear, and hoped for the best. And she stayed dry all the way home!

Yesterday Rachel pooped on the potty for the first time ever. I screamed so loud with excitement that some of you may have heard it where you live! :) And we went out in the evening and she stayed dry the whole time.

So, fingers crossed, I think we have trained Rachel. After the nightmare, and years of work, that was training Sam, this has felt like a pretty easy transition. I will still put a pullup on over Rachel's underwear when we leave the house for any length of time (like today I have to go run some errands), but we can see a diaperless house in our near future, and after five and a half years, that feels like a pretty huge milestone!

And that was our weekend. Thanks for reading along. What did you do this past weekend? I hope it included less of a focus on bodily functions and more on fun, but sometimes that's how life goes.

Note: We are not pushing Rachel on night training, and we will let that happen in its own time, but she does wake up dry 2-3 times a week, so I don't think we're too far off from that milestone either.
Posted by Natasha at 10:55