About a month ago, Canada had its 43rd election. Erika asked if I would write a post about the election process in Canada and here is my (non-expert) discussion about how politics works in Canada. And I realize this post probably holds way more information than you care about, but I thought some of these things were really interesting. Sorry :)

Sarah, a blogger I've discovered in the past year or so, (she blogs here) is the only other Canadian reader I know who comments regularly. So Sarah, please feel free to jump in with anything I've gotten wrong/have misinterpreted! And if there are other Canadians lurking in the background, feel free to add your say as well. 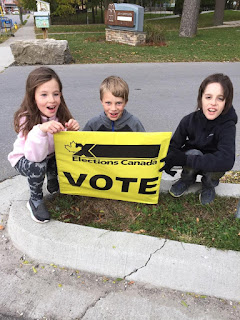 Canada has three/four/five-ish main political parties. I would say that almost all of the elections have been won by either the Liberals or the Progressive Conservatives (PC). The Liberals tend to be a more central/left leaning party and the PCs tend to be more right leaning. The New Democratic Party (NDP) is another party player. They tend to be more left of centre and I think they have won the official opposition (second most votes) once. The Green Party is another major player with a very left leaning agenda. They are mostly concerned about climate change but have other policies as well. They only won three seats in this most recent election, although many people thought they might do better than that.

We also have a weird dynamic with one of our provinces having its own party -- the Bloc Quebecois. You can read more about Quebec here (a blog post Dave wrote about Quebec, including its history and current makeup). The Bloc only represents Quebec and its interests, and in this last election, they came in third overall. In 1993, they won enough seats that they were the official opposition. Yeah. By the way, the Bloc won 32 seats in this election and the Green Party won three although they had a similar popular vote count. (It is this disparity between seats and votes which makes me think we should move to a proportional representation system.) 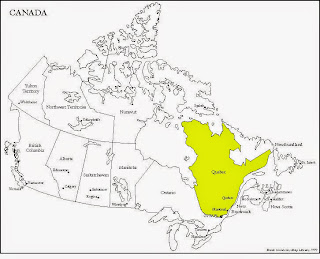 There are 338 seats in our House of Commons (kind of like the House of Representatives in the US) so to win a majority, a party has to win 170 (or more) seats. The country is divided into 338 ridings and each riding elects a Member of Parliament (MP). The current MP for our area is a Liberal. The ridings are mostly determined by population so a big city like Toronto has 19 ridings, while my home province of Saskatchewan has only 14. The Yukon, which we visited this past summer, has one riding.

We don't have an eight year maximum for our leaders like the US does with its presidents. Our longest sitting Prime Minister (leader of our country (PM)) was William Lyon Mackenzie King who served as prime minister between 1921 and 1948. He wasn't prime minister the entire time but his total time as PM was over 21 years. Between 1867 and 1891, Sir John A MacDonald (our first prime minister) was in office for 18 years, 359 days. (I think they just should have given him the extra six days for a total of 19 years!). In more recent history, Pierre Elliot Trudeau (the father of our current prime minister, Justin) was in office for 15 years, 164 days between 1968 and 1984.

Our shortest serving prime minister was Charles Tupper who served for only 68 days in 1896. The other two shortest serving PMs were in my lifetime -- John Turner (79 days in 1984) and Kim Campbell (technically our first female PM who led for 132 days in 1993). Both John Turner and Kim Campbell became PMs after the official PM resigned as leader of their party while in office. Turner and Campbell won the leadership of their parties and then called elections. They both lost those elections.

The party leadership elections are not a big deal here. The party members vote on the leaders. I did some searching on Wikipedia, and according to this article, the most recent leadership convention for the PCs started around November 2, 2016 and the final leader was elected in May 2017. I had heard about some of the potential leaders but didn't watch any of the debates. I don't think most people would have been that involved.

We used to have to have federal elections every five years but in 2006 that was changed to at least every four years. Currently Justin Trudeau and the Liberals have a minority government. This means that they have the most seats in government but not a majority so anything major they want to pass will need support from other parties (most likely the Bloc or the NDP as they share similar values). Likely we will have another election in the next year or two as minority governments don't tend to last long.

One thing I like about our elections is that they have changed the voting hours across Canada. Living in Saskatchewan, we used to have TV blackouts until our voting hours were over, and then when the blackout was over, they already would have announced the election results (since the majority of Canada lives in Ontario/Quebec). Now with the internet, they have changed the voting hours so that most of the country is voting at the same time and we all find out the results at once.Thus in Ontario, we voted from 9:30am until 9:30pm and in British Columbia, they voted from 7am - 7pm.

The polls are open for twelve hours and your employer must make sure that you have three consecutive non-work hours to vote. Since Saskatchewan's voting hours are from 7:30am - 7:30pm, that meant that all the city offices closed at 4:30pm on voting day so their employees had the necessary hours. Again, I don't know how this works in the US but I think it's really cool.

We have maximum and minimum lengths for our election campaigns which make me so happy! The maximum length is 50 days! Yes, 50 days! That's the most amount of time that can pass between an election being called and it happening. So while the US knows that it will be voting on November 3, 2020 and campaigning is already happening for that, Canada doesn't know any more than 50 days ahead of time. 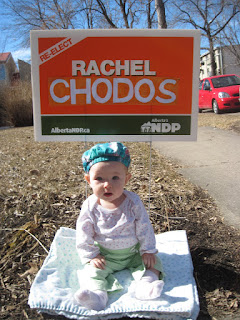 A cute picture of Rachel under an election sign we changed for a joke!
Our landlord put up the sign, approved the temporary change,
and thought this picture was hilarious!
We also have a Senate with 105 members -- 24 each from the Maritimes, Quebec, Ontario, and the western provinces. Nine members also come from Newfoundland, and each of the three territories -- the Yukon, the Northwest Territories, and Nunavut. However, don't ask me what the Senate does because I have no clue. Also, the senators are appointed by the prime minister, or possibly by the party in power. (Dave offered to fill me in on the Senate's role and I told him I didn't care and he could leave a comment. Check back later today if you're interested!) Our MP sits in the House of Commons and as far as I know, that is where the majority of the country's business happens.

And then we have the Governor General (GG) who is the Queen's official representative here in Canada because we are technically under the monarchy of England. Again, this doesn't really play out in my day to day life. The GG is appointed by the Queen with the advice of the prime minister. Generally, the GG's term is about five years. Our PM is thus not Canada's official "head of state" (that would be the Queen) but the "head of government." I don't know what this means technically but I thought it was a interesting fact!

A few other things to note:

*Our official party leaders have to be able to speak both French and English as those are Canada's two official languages. There is an entire debate that takes place solely in French.

*Our current prime minister is only 128 days older than me. That's slightly terrifying :) He is our 23rd PM.

*Our PMs have to win a seat in their riding to be elected. They are technically elected as the MP of their riding and the party leader. When their party wins a majority (or the majority of the seats), then they are the PM. So I will never cast a vote for a Prime Minister unless my local MP wins the party leadership, which hasn't happened yet.

Sadly, right now our country is pretty divided politically -- Western Canada tends to be more right leaning, Ontario and Quebec tend to be more centre/left leaning and it makes me sad. One thing I like about this minority government is I think Canadians have sent the message that our government needs to learn to work together to accomplish things on behalf of ALL Canadians. We shall see how that goes...

So there you go -- more information than you ever wanted to know about Canadian politics. If you have any questions (or clarifications for Canadians), please feel free to ask. I don't know all the answers but I will give it a good try!
Posted by Natasha at 05:52