This post takes us back almost two months but it's something I want to remember so welcome to our past :)

The week before Easter/Passover, nothing went as we had planned. On Palm Sunday, Sam woke up with a fever. Sadly, we had to postpone his school friends' birthday party which was supposed to happen that afternoon and laid low.

On the Monday, Sam still had a fever so he didn't go to school. That afternoon, he had a nap and when he woke up, the fever was gone but he had broken out in a rash. I took him to a walk in clinic and Sam ended up with a diagnosis of fifths disease. It's like roseola but for kids over age two. The doctor said Sam had to stay home from school for the rest of the week. Ugh.

Thankfully, except for one evening, Sam was never too bothered by the rash and it didn't get a lot worse. Unfortunately, Sam had a ton of energy. So Dave and I gave him "projects." One day he researched about Notre Dame and wrote a page about it in French. (This was the day after the Notre Dame Cathedral fire.)

Sadly, Sam's illness meant that we couldn't enjoy the first Passover seder with Dave's family so, a bit last minute, we had to make do on our own. I told Sam that his job was to tell the story of Passover using Lego. We weren't sure where he was going to go with it, but he did an amazing job. Dave and I were half laughing, half in awe.

Rachel also wanted in on the act, so she told the story of Moses using her stuffed animals. She also did an amazing job. The kids then recreated their stories for our postponed seder with Dave's parents the following week. 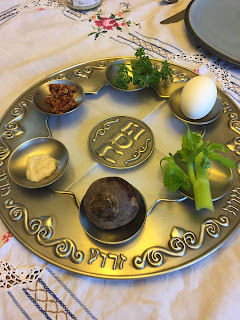 This is the Seder plate representing the symbols of Passover. I have explained the symbols going clockwise from the egg. Usually the egg is roasted. It represents new life as Passover is in the spring. The celery is a bitter herb to remind us of the tears of slavery. The beet is the vegetarian form of the shank bone. It represents the lamb which was slaughtered to mark the homes of the Israelites so the Angel of Death would "pass over" their houses and not kill their first born in the tenth plague. The horseradish is the second bitter herb because slavery was a bitter burden to bear. The charoset (walnuts, apples, and red wine) represents the mortar for the bricks. The parsley also represents spring. 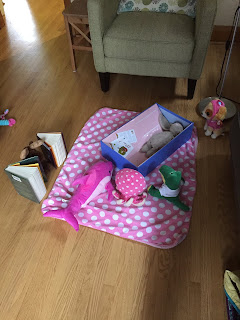 These first pictures are Rachel's set up for telling the story of Moses. Above is Moses in his basket with his mother (Skye from Paw Patrol) looking on in the upper right hand corner. The moose hiding among the books is Moses' sister Miriam watching over him from the reeds. And supposedly the Nile River, where Moses was set adrift, had some sea animals (alligator, dolphin, and octopus) present. 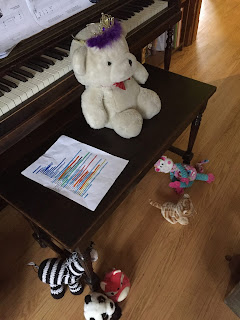 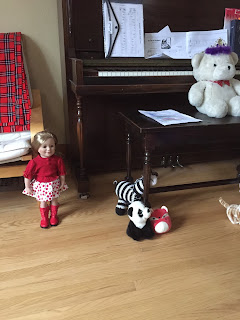 Pharaoh's daughter is resting against the chair leg, waiting to rescue Moses. 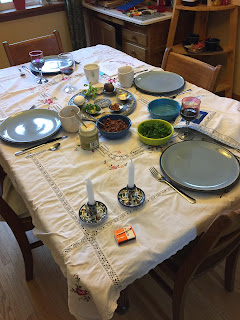 This was our table set for the seder. There are a lot of moving pieces and symbolic foods used during the seder. 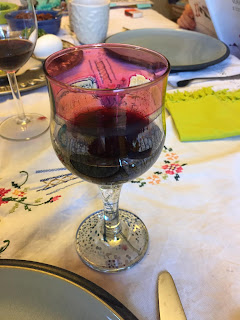 During a true seder you drink four cups of wine. I think we made it to three. Ha! We added a cup of orange juice to the seder plate because in the 70s one man said, "Women belong on the bimah (leading at the front of the synagogue) like an orange belongs on a seder plate." Ever since then, progressive Jews have added an orange to their seder plate. (We forgot to get an orange ahead of time so we substituted orange juice.) Dave's parents gave the kids their own siddurs (books outlining the order of the seder) for this Passover and Sam read that a banana on the seder plate reminds us of refugees so we added that as well. 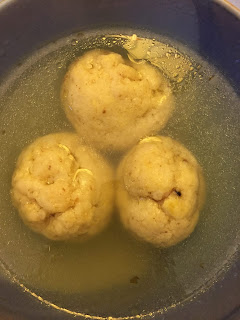 Matzoh ball soup is probably my favourite part of the seder. Yum!!! 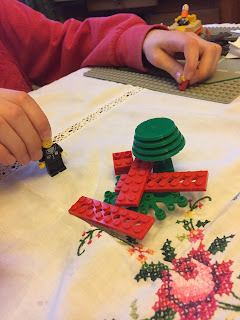 This is the beginning of Sam's retelling of the story. He built all the Lego creations, and came up with the ideas, on his own. I basically just told him "recreate the Passover story out of Lego" and showed him how much of the story to tell.

This is Moses at the burning bush! 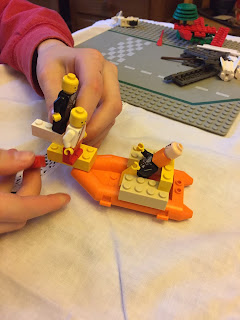 Moses and Aaron are talking to Pharaoh on his throne. 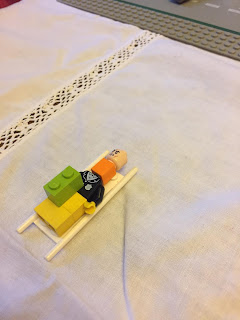 This is the plague of frogs attacking Pharaoh. 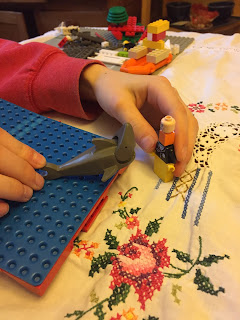 This is the plague of the wild animals. Didn't you know the Red Sea had sharks?!?!? 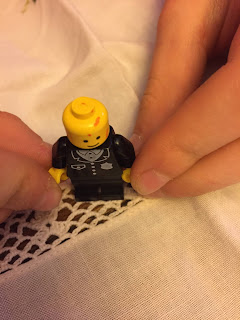 The red marks on the head represent the plague of boils. 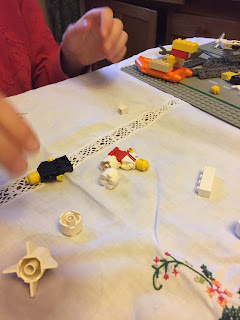 The plague of hail was dangerous and knocked people out! 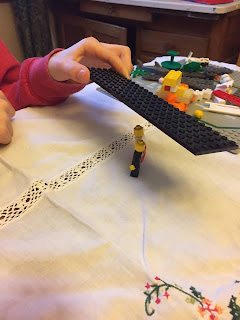 The plague of darkness was easier to portray. 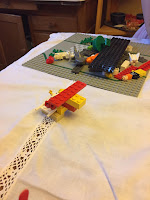 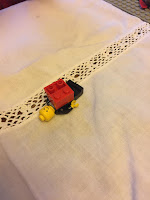 I think both of these were the death of the firstborn. 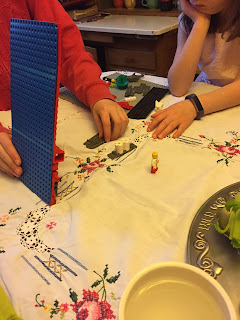 Finally Pharaoh let the Israelites go. The bread they made didn't have time to rise so they carried it on their backs (the white circles on the grey boards above.) Also, here you can see the red side of the river from the plague where it turned to blood. 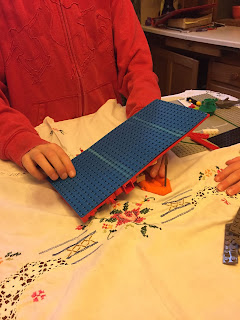 The sea closed over the Egyptians who were trying to catch the Israelites to return them to Egypt. 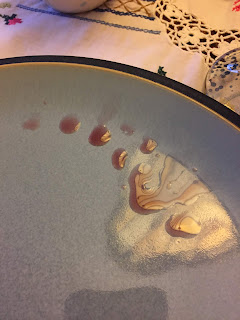 Another part of the seder I find really meaningful is when we take one drop of wine for each plague out of our glasses to remind us that our joy at being free came at the Egyptians' expense.

And that was the story of our seder this year. Of course, it involved some original songs by Dave based on our family favourites -- he's written a great version of the Blue Jays' seventh inning stretch song "OK Blue Jays" adapted for Passover -- and a great supper.

But what I loved most about this year's seders were how the kids took various pieces of it, made it meaningful for them, and ran with it. I love seeing them take more ownership in how our family traditions are being shaped.
Posted by Natasha at 06:05