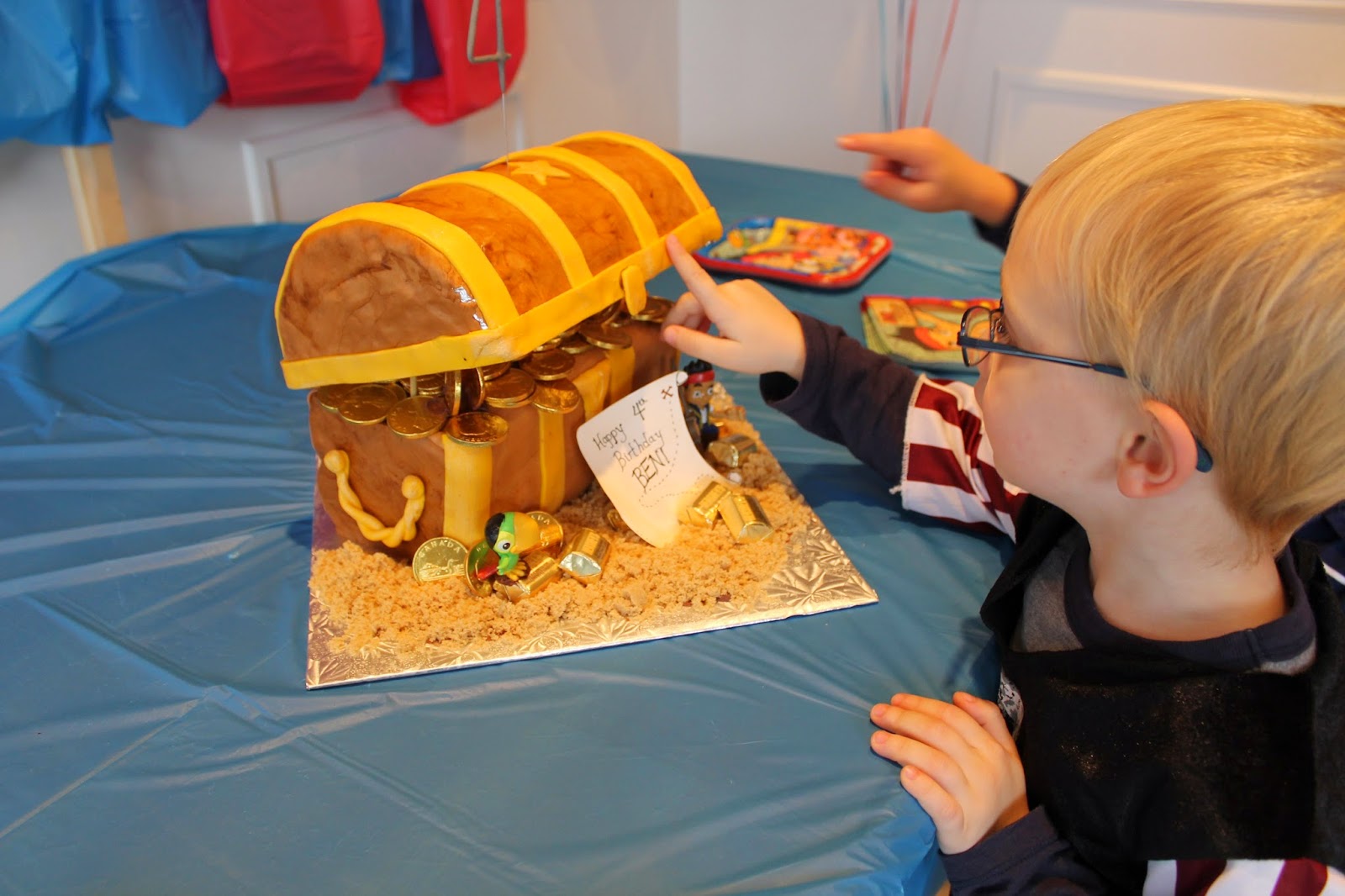 A few weeks ago Sam and Rachel were invited to the birthday party of one of Rachel's preschool classmates. B's mom, K, and I are on the preschool board together and have gotten to know each other better over the past year or so. B has an older sister whose name also begins with B (!), and she and Sam were in the same KinderPrep class a few years ago. Sam and Rachel really enjoy playing with these kids so we were all looking forward to the party.

There were a few kids from B and Rachel's class invited and I think Rachel was the most excited about a birthday party that she has ever been, including hers. By the time we arrived she was bouncing off the walls!

The party was a pirate theme and K is a woman after my own heart. The party was amazing! She told me that most of her ideas came from Pinterest and it just proved that we really are kindred spirits! When we arrived there were pirate props -- eyepatches, swords, and pirate hats. The kids ran around like maniacs for a bit and then they headed outside to do a treasure hunt and to walk the plank. 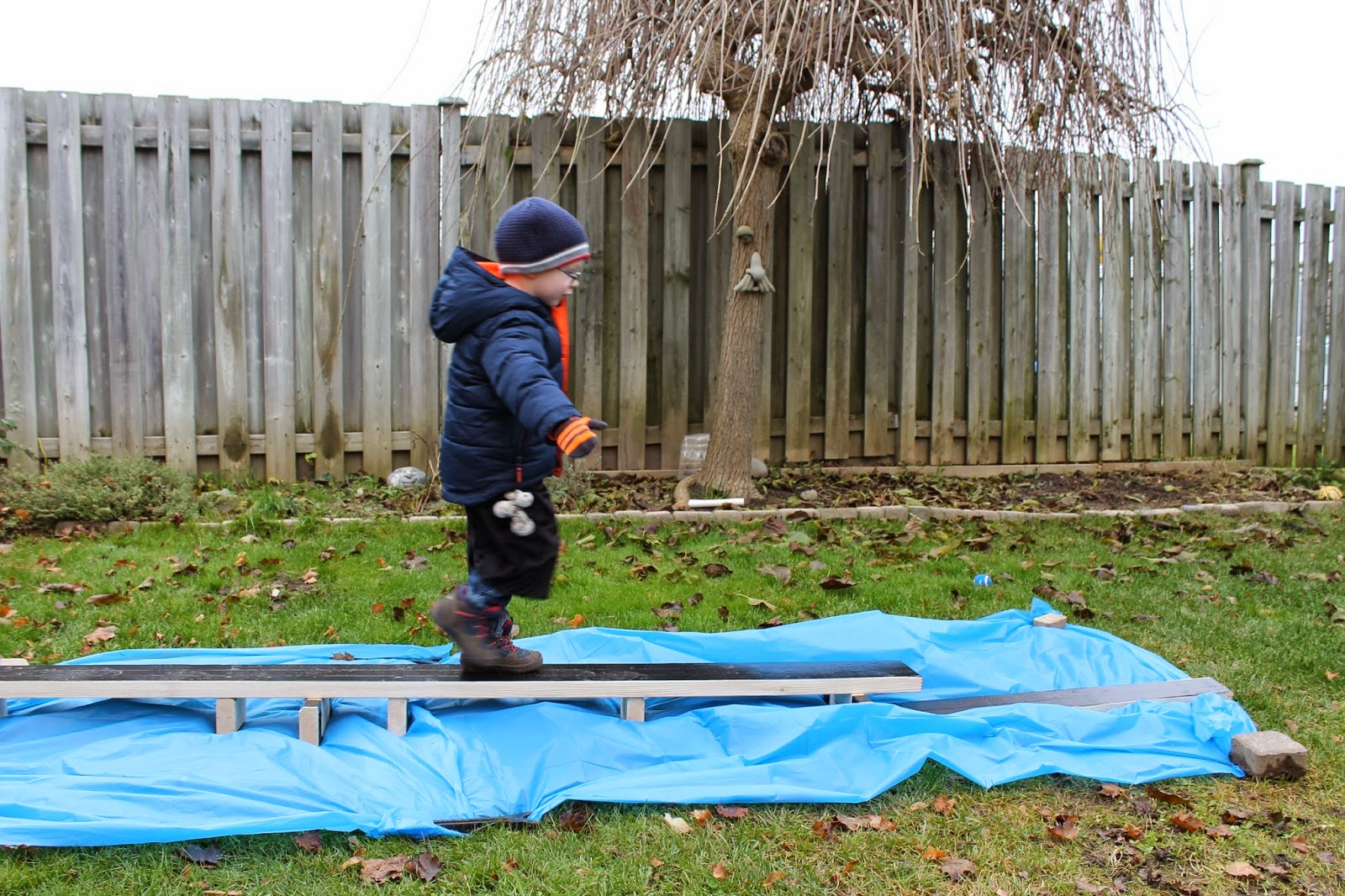 The birthday boy was a pro. 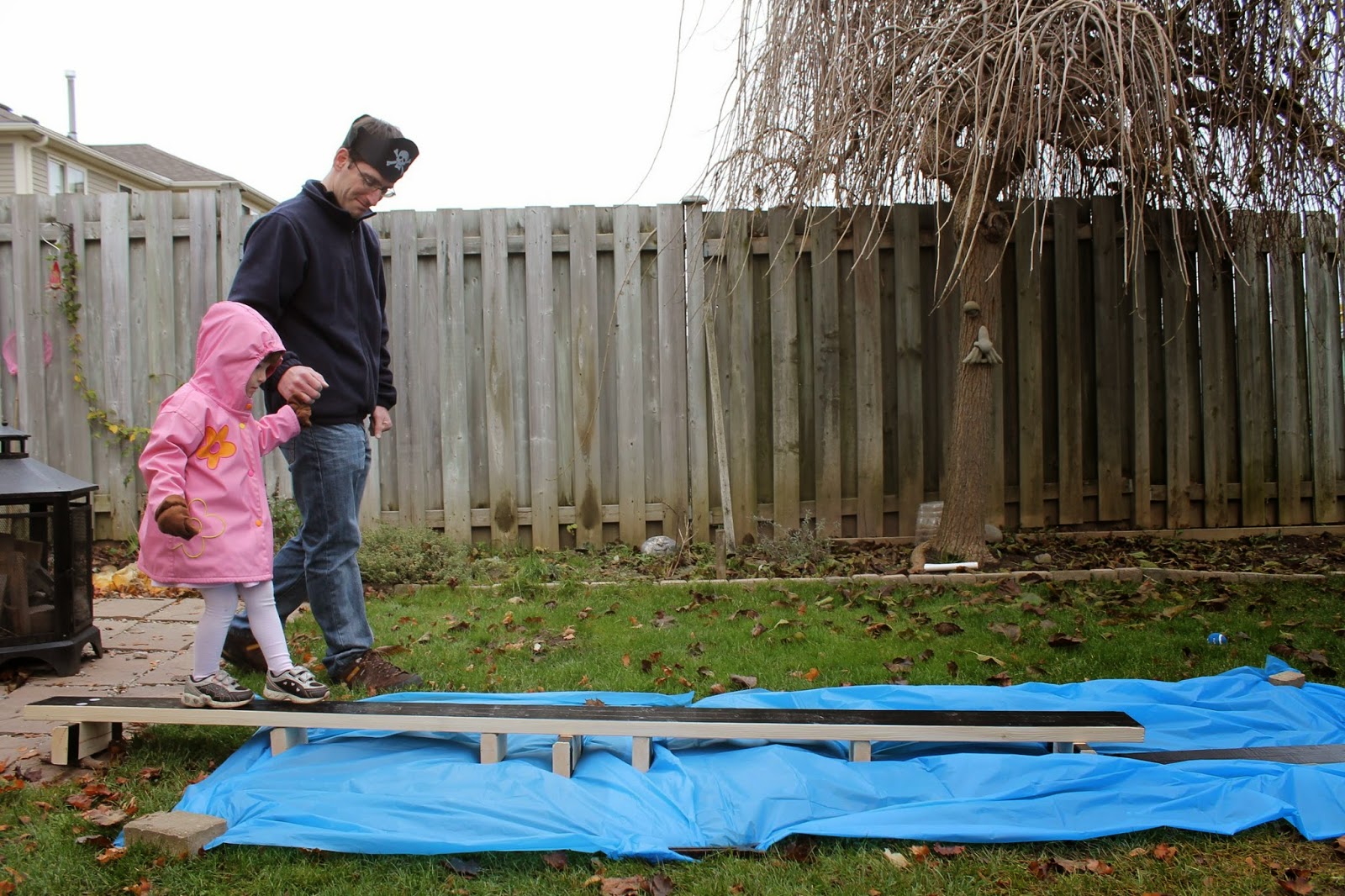 Rachel wanted some help from Dave. 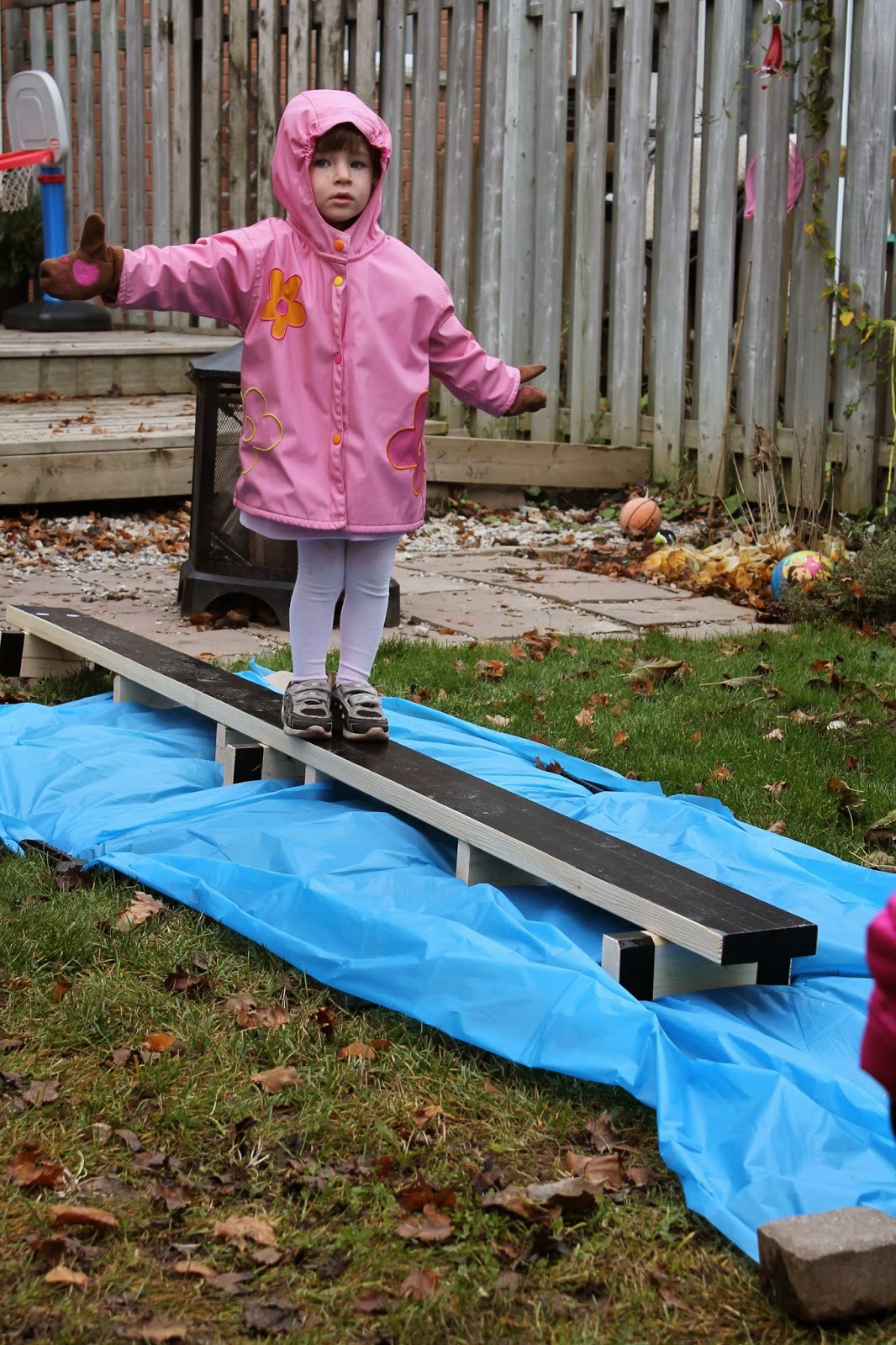 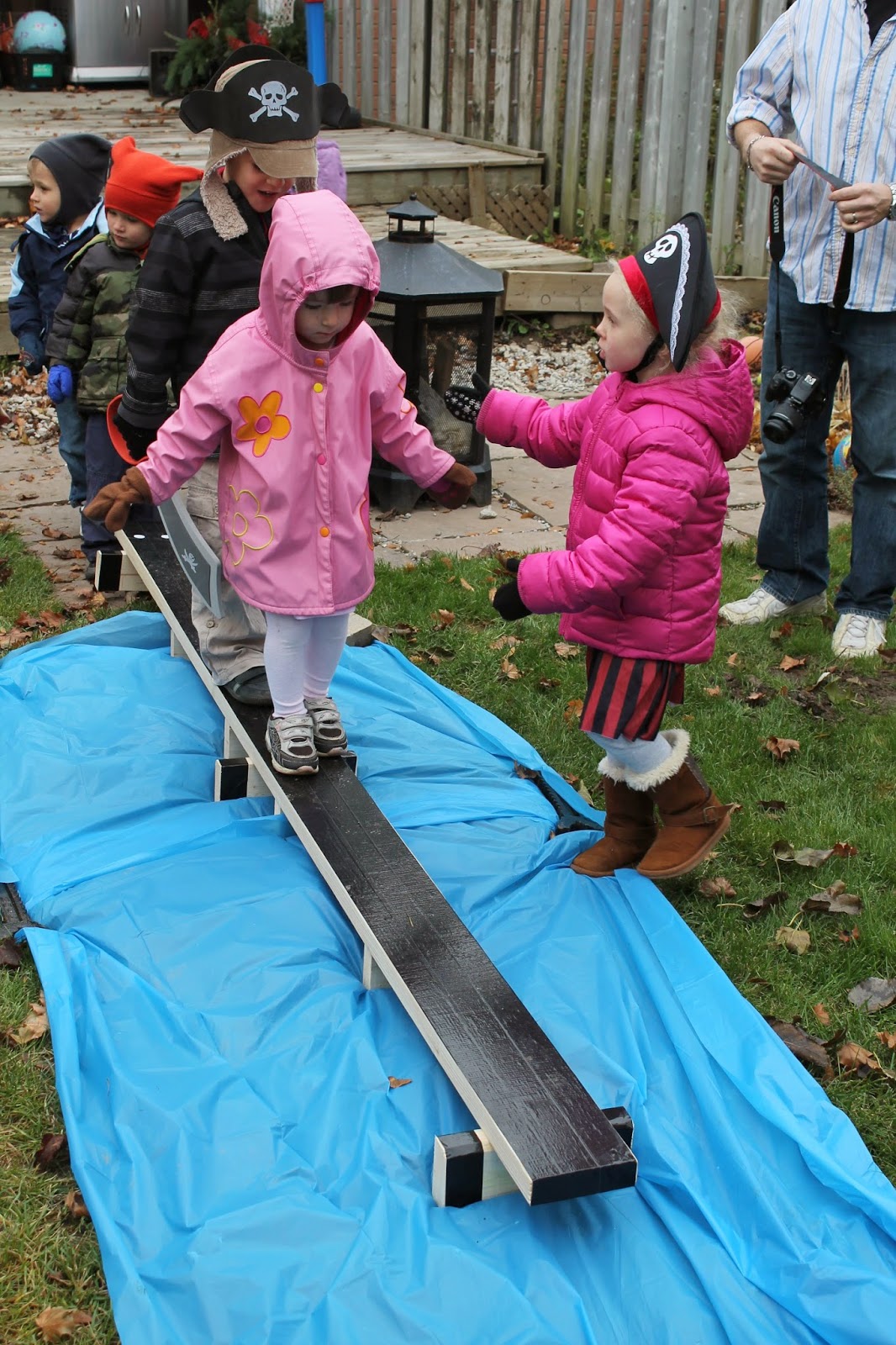 She decided to brave it on her own, and when she called for help, B came to her rescue. I thought that was so sweet! 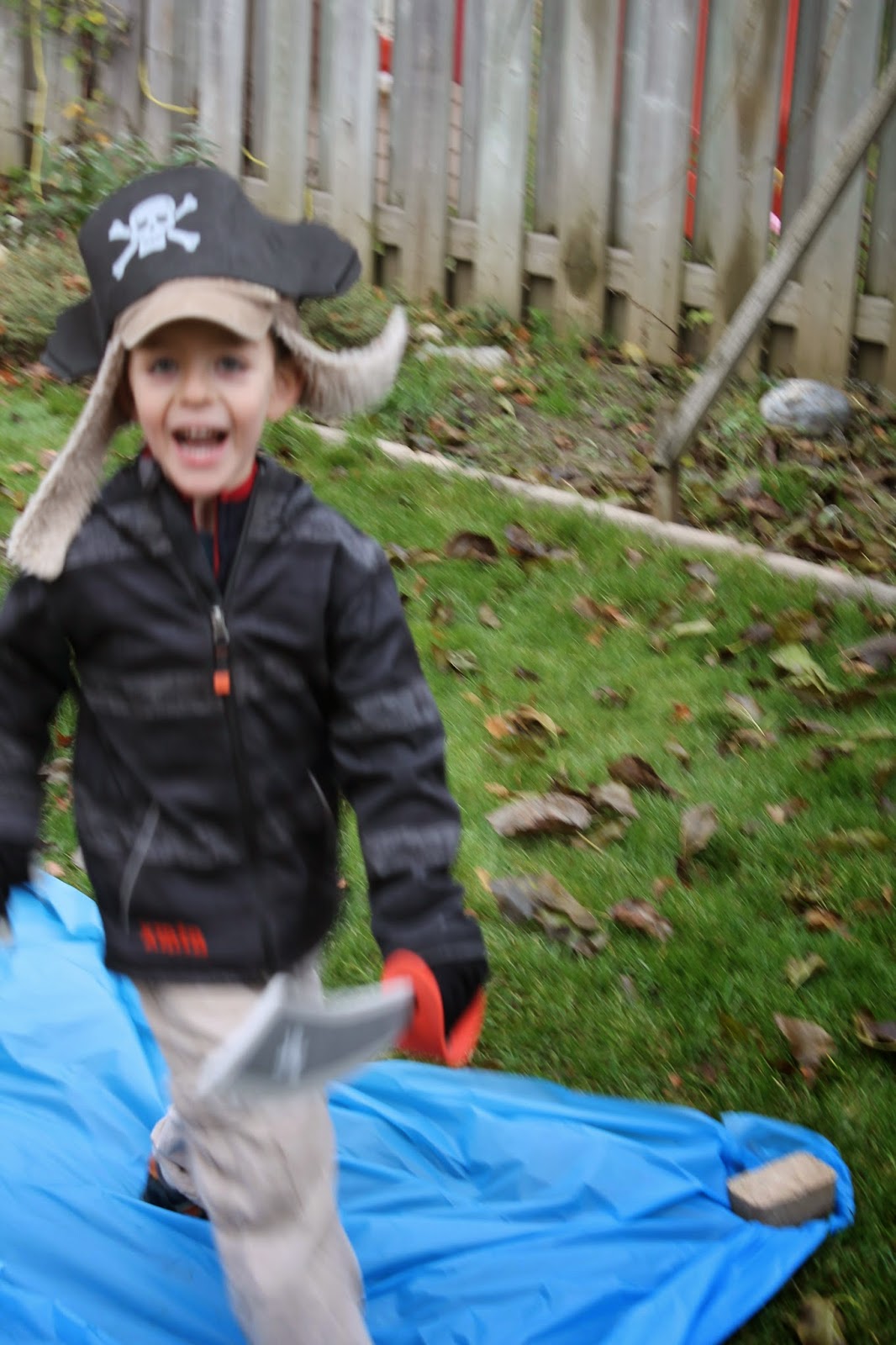 This picture of Sam gives you an idea of the level of energy!

Then the kids all visited Jake's Tattoo parlour where I proceeded to apply the first tattoos I have ever done. Ironically, I gave  B&B their tattoos and K did my kids. There were cute labels for all the food. You could choose from "Walk The Veggie Plank!", "Cannonballs" which were meatballs in sauce, "Pirate Peg Legs," "Chip Boats," and "Scully Want A Cheese And Cracker?" Also, K's husband and mom had constructed a mast and sail above the snack table and I'm so sad I didn't get a picture of it because it was amazing!

Sadly, I don't have pictures from the rest of the party because as soon as the cake was consumed my kids went INSANE. Sam downed his cake and ice cream too quickly, turned green, and Dave rushed him to the bathroom because we thought he was going to be sick. Thankfully he didn't throw up and felt better about twenty minutes later.

Rachel finished her cake, and because she had gotten chocolate all over her tights, I took them off. I will NEVER EVER do that again because Rachel spent the next fifteen minutes running around maniacally laughing, and trying to take her dress off too. This meant I was running around after her, trying to keep her dress on. It was chaos. We would have just left but remember, Sam was hanging out over the toilet bowl.

I commented to K that I thought I would only have to worry about wild parties like this (oh yeah, the smoke detector went off too!) what with the tattoos, the undressing, the toilet bowl hugging, once my kids were in university and not when they were THREE and FIVE! Apparently I was wrong. (And just for the record, I would prefer that my kids never go to those kinds of parties.)

We came home and thankfully, I had to leave about half an hour later to go to a preschool board meeting. Dave said the kids spent the rest of the night talking like pirates, getting more tattoos, and swinging their swords around. At one point, Sam was wearing two eyepatches. Yeesh.

The kids still talk about how much fun B's party was, still talk like pirates, and ask when they can go over to play with B&B again. I don't know if we'll ever be invited back :)
Posted by Natasha at 08:08