As I've mentioned on the blog before, in January we started a Country of the Week (COTW) pilot project. It was started by a friend of a friend and he was looking for a small group of people to test out the idea and provide feedback. Being a family who loves to travel and explore other parts of the world, we enthusiastically jumped on board!

Every week the coordinator sends out a country sheet for the week's country and writes an e-mail introducing the country to us. He also sends out links to some videos to watch. These are all found on YouTube. (We have been specifically asked not to share resources, so I'm sorry I can't, but I want to respect the coordinator's time and work that he has put into this. Otherwise I would share some of our favourites here. The idea of adding food to the COTW project was mine and I found almost all of the recipes on Pinterest. You can see my COTW Pinterest board here.)

The first week, we were introduced to France and the video talked a lot about yummy French foods -- brie, baguettes, Napoleans, etc. The kids were curious about some of the food so that week at the grocery store, we picked up food for a French-inspired meal. The kids loved it. 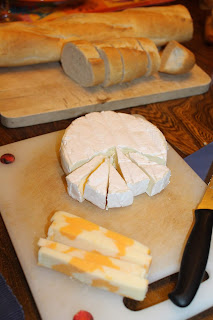 Thus, the idea of eating food from the country we were exploring that week was born. Truthfully, the kids have not loved every meal, and neither have I, but it's been really good to expand the meals we eat from week to week. So I am going to share our favourite COTW meals here in hopes that maybe some of you will find some new interesting foods to add to your menu plans. 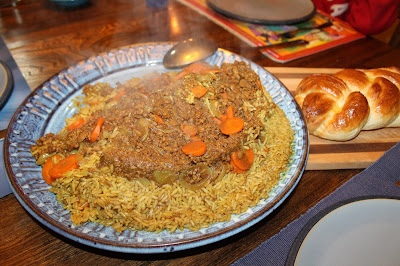 Turkmenistan Plov -- you can find the recipe here. I used veggie ground round because I think I also found a version which said ground beef could be a substitute. I also used olive oil because I didn't have any sheep's fat on hand. HAHAHA!!! I remember this meal being fairly easy to make and we all really enjoyed it. Plus there was the fun factor of dumping it upside down on the plate. I definitely want to make this again, although I haven't done so yet.

Mansaka and Oven Pancake from Denmark -- You can find the mansaka recipe here and the pancake recipe here. Mansaka is basically a potato-meat (ground round) - pasta sauce casserole. The oven pancake is one of the best things I've ever eaten. For the Mansaka, I don't like Swiss cheese so I substituted cheddar. The oven pancake I made as instructed. 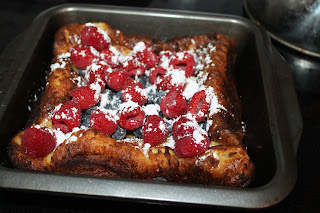 A few weeks later we made this meal for friends of ours and while a little complicated, it worked fairly well as a company dish. And we made one meat one and one veggie ground round one. This would be a really amazing cold Winter dish. I would not make this in summer -- it's too filling and rich (in the case of the pancake). 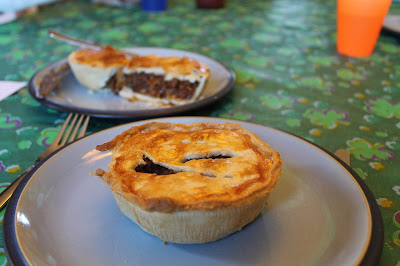 Australian Meat Pie -- You can find the recipe here. This was a fairly time consuming recipe to make (and I used store bought frozen pastry dough) but, except for Sam, we all loved these. And they totally transported me back to Australia so there was that. Again, I made them with veggie ground round (and used boullion instead of vegemite - yuck), but other than that I made them as instructed.

I will definitely make these again when I have time and Sam can just eat a peanut butter sandwich. Ha!!!

Norwegian Potato Soup and Apple Pie -- The recipe for the soup is here and the pie is here. For the soup instead of making the meatballs, I bought veggie "meatballs" and added them in at the last minute so they could heat up. For the pie (which is really more of a cake than a pie) I did not add the optional raisins or pecans and I halved the recipe. It was delicious! 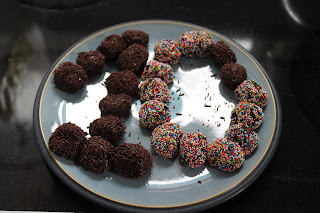 Brigadeiro from Brazil -- The recipe is here. I didn't change a thing. These are in the shape of a "10" because Sam was having his church friends' party and I realized I had not thought about any cake type item. The boys were playing outside and I whipped these up in about half an hour. They were a big hit.

Rachel wanted an "Around The World" theme for her birthday party and all the party attendees made these when we "visited" Brazil. I would highly recommend not trying to make these with a group of seven and eight year olds unless you have another adult present to help. Ha! 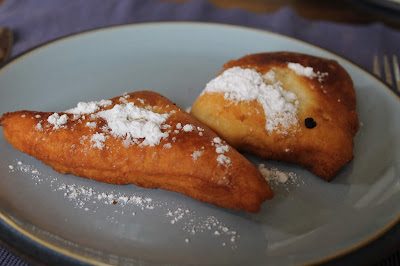 Rwandan pancake -- The recipe is here. This was a little time consuming to make, and Dave and I rarely deep fry anything so that was an adventure, but these were delicious! I don't know that I would make them again (due to the time and deep frying) but you might want to try them once. So worth it! 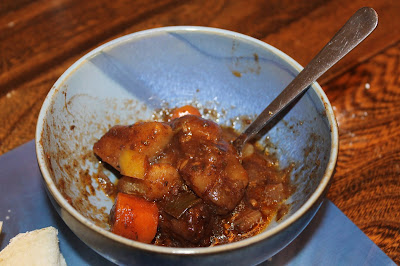 Jamaican Beef Stew -- The recipe is here. I LOVED this recipe which is why my bowl was almost empty before I remembered to take a picture. Now I don't have a slow cooker so I just made mine on the stove. I used vegetarian beef tips and added extra beef boullion for a "beefier" taste. I did not use hot sauce (or a Scotch bonnet pepper) and I only had regular paprika. This reminded me of a traditional beef stew but the spices were what made it amazing! It was sooooo good!!! 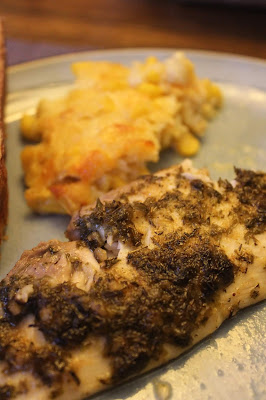 Snapper Barbados -- The recipe is here. In the background is a Barbados corn pie but I didn't really love it and the kids didn't either. However, the fish was ah-mazing!!! Sam ate as much as he could. I couldn't find snapper so I used tilapia and I didn't add the cayenne but the combination of parsley and lime was incredible. I would totally make this again.

So there you go, some new international recipes to add to your menu. Sadly, Dave and the kids have decided that they no longer want me to pair meals with our COTW nights so they are going to be a lot more boring. I might sneak a new recipe in now and again though, especially if I think it's going to be a keeper.
Posted by Natasha at 06:12