I love how linking up with Kimberly, Andi, Tamara, and Tanya for #AMonthofFaves has gotten me back into blogging -- for this month anyways! Today we're talking about "Routines, Habits and Changes. What Worked this Year and/or What Didn’t."

I'm going to talk about a couple of things I've just started doing since September which I think have really helped with my life.

The first one is (mostly) cutting out after supper snacking. I realized about mid-September that I was mindlessly (most nights) reaching for a snack every single night once the kids were in bed. It wasn't even that I was always hungry -- it was just a bad habit.

So I decided to cut it out completely. I am happy to say that I have mostly broken this habit. Having accountability with Dave really helped me. Now when I want a snack, I explain to Dave why I need it. He never dissuades me but I find that having to think about why I'm eating helps me not to snack as much. I would say that I now have a post-supper snack about once every week or two rather than every night.

For those of you who have read around here for any length of time you know how much I love and adore a cold Coke. Again, this past fall I realized that I was drinking at least one, if not two, cans a day every single day. I justified it by the fact that I don't really drink much alcohol (once a month, if that), I don't do a lot of sweets (although salty is totally my thing!), and I don't really think I have a lot of other bad habits. 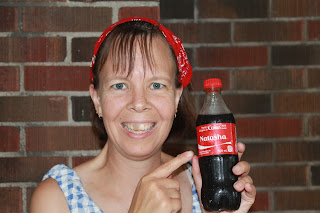 But this Coke thing was getting way unhealthy and I knew it. So I decided to go cold turkey and only drink one every other day, if that. As I'm writing this post it's been three days since I've had a Coke.

I would like to make a couple of other healthy (healthier?!?!) eating changes. Again, those of you who have read around here for any length of time will know how much I struggle with drinking water. It's so good for me so why do I have such a hard time with this?!?!? I don't know. Hand in hand with that, I'd like to cut down on the amount of coffee-hot chocolate I drink. I make it at home so it's not like I'm downing three Starbucks mochas a day, but I probably don't need three mugs at home either.

So there you go -- my eating (drinking!) struggles all laid out for you. I think in the New Year, after the holidays are over, I'm going to work on the coffee-hot chocolate/water struggle. I feel like they complement each other and will be easier to tackle together but we shall see.

What have you struggled with/changed this past year? Let's celebrate our accomplishments/keep each other motivated together.
Posted by Natasha at 06:16