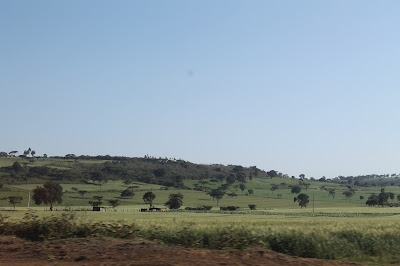 A week and a half ago we left Lake Naivasha bright and early and headed off on our safari. Our friends had arranged for us to go on a private safari with a guy they knew from school. Andrew was an amazing guide and he was great with the kids. It was so nice to not have to rush and just have everything be on our schedule, especially with the kids. 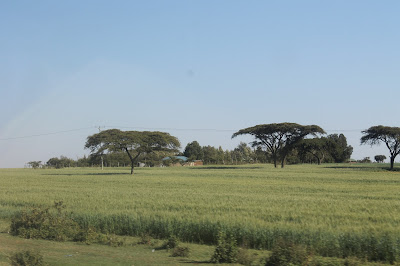 I'm sure you've all heard of the Serengeti. That is the famous wildlife area in Tanzania, which borders Kenya. On the Kenyan side it is called Masai Mara. The place where we went on safari was a conservancy which borders the Mara. The conservancy is land rented from 500 Maasai families by some safari camps and there is a big emphasis on wildlife protection. You can read more about the conservancy we stayed on here. 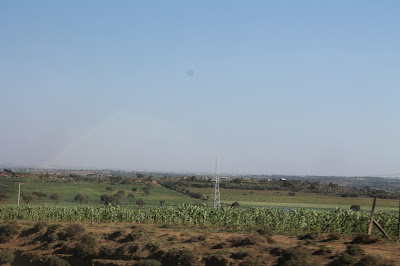 It was about a five hour drive from Lake Naivasha to the safari camp. These first few pictures are scenes from the window as we drove through, and out of, the Great Rift Valley. The last fifty or so kilometres to the camp were on a rough, washboard, gravel road. We were so jostled around that at one point Rachel and I looked at each other and just started laughing hysterically. It was like the laughter was being jostled out of us. Andrew joked that we were getting an "African massage." 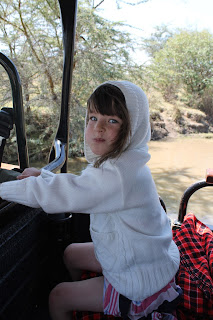 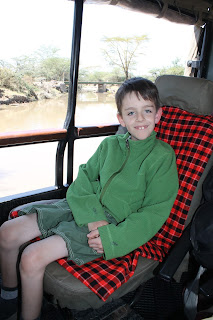 Our safari vehicle had open sides so we could get up close and personal with the animals. And take good pictures! We had a driver, Dennis, who was awesome and could get us over all sorts of terrain and really close to the animals. 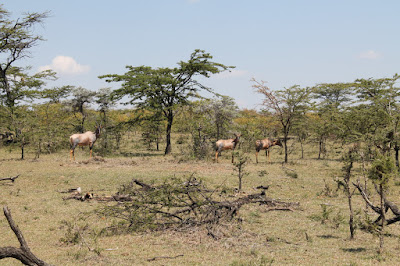 The animals in this picture are topis. There are a type of antelope. We saw a lot of topis. 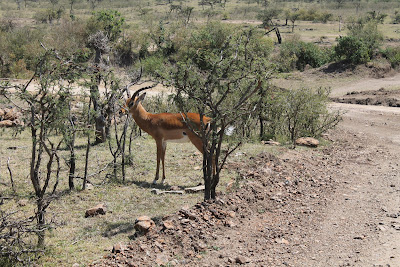 This is either an impala or a gazelle of some sort. Sam, especially, got really good at identifying impalas, Hunters gazelles, and Thompsons gazelles. He would point them out by name and I was like, "I see an animal!" We joked that Sam is going to be a safari guide when he gets old enough. 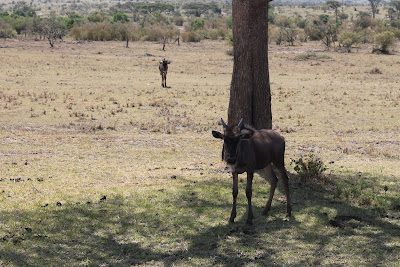 We also saw a lot of wildebeests. They are a pretty funny looking animal. 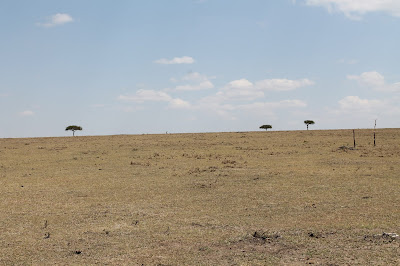 When we weren't spotting animals, we were enjoying the scenery. For some reason, this picture just says, "Africa!" to me. 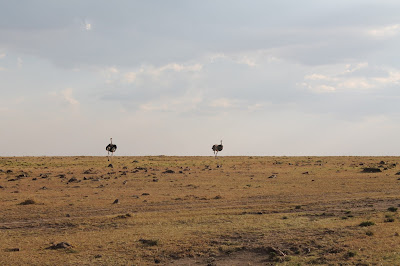 I had no idea we were going to see ostrich in the wild! Spoiler alert: The following day, Andrew lent us his zoom lens and our pictures improved significantly. I can't remember why, but we couldn't get too close to the ostrich. But still, we got to see ostriches!!! 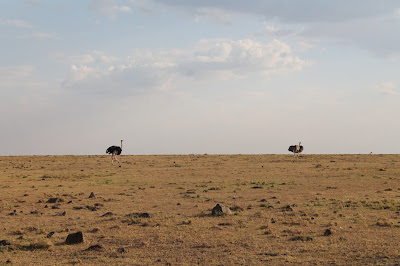 The kids loved looking through the binoculars to see what animals we might spot. Andrew explained to us that because the animals in the conservancy grow up with the safari vehicles as a part of their daily lives, they aren't scared of them and so humans (in vehicles) can get quite close to the animals. Or the animals feel comfortable getting close to the vehicles.

We had to be really quiet (I was proud of how quiet the kids were), and Andrew warned us to not stick anything out of the vehicle. He explained that the animals (like the lions, for instance) just see  the vehicle as a big animal so won't attack it. However, if an arm was sticking out, it would probably be fair game. This is how we were able to get so close to animals without being in danger. 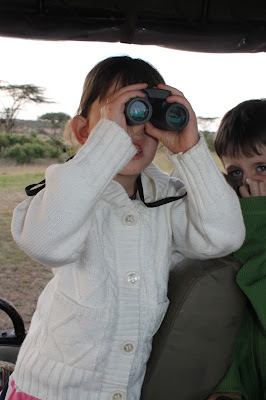 Then we hit the jackpot! (Warning: This was also known as the grossest part of our safari but I tried not to include any really graphic pictures.) 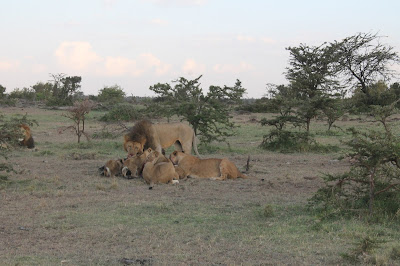 We found twelve lions with a fresh kill. And by "fresh," I mean like it had been taken down just minutes before. There were two lions, three lionesses, three older lion cubs, and four baby lion cubs. Andrew figured the one male lion had eaten recently as he just sat back and watched. You can see him in the upper left corner of the above picture. 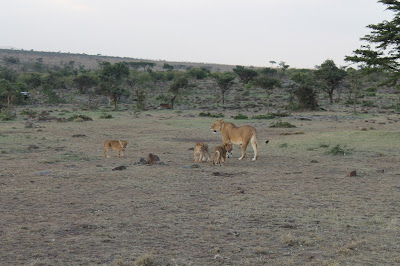 Dave got some great video of the lions growling (talking!) to each other. The male lion obviously wanted first priority in eating, but the one lioness was hungry too. And Andrew figured that one of the lionesses was the one who took down the kill. 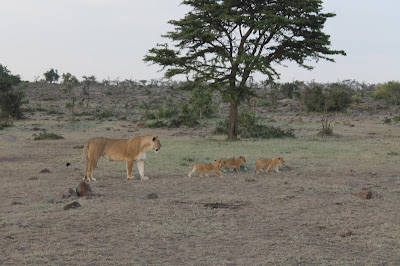 Four of the lion cubs were still nursing and not interested in meat but the older three were probably in the process of being weaned and eager to get their share. 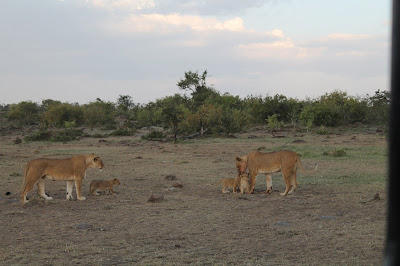 We saw lots of great interaction among all the lions and it was pretty cool/gross to see. (If you want to see more pictures/hear a more graphic description of them eating, let me know. I think this scene will be imprinted in my head for a very long time. As Sam commented, "I was hungry before we found these lions, but I'm not now." And I was very glad I was a vegetarian! Ha!) 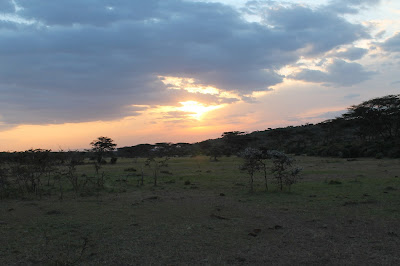 The sunsets on the savannah were incredible. I took a lot of pictures as the sky changed. It reminded me a bit of Saskatchewan because you could see vast amounts of sky. 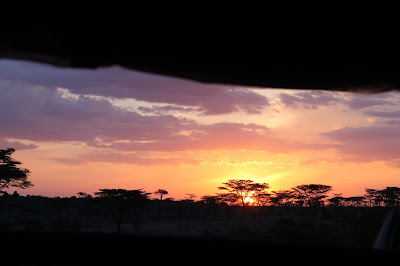 We had heard from another group at the camp that they had seen a leopard earlier that day. Andrew and Dennis knew where to look for it, and we drove out to this ridge. After a while, our patience was rewarded and this leopard cub, which Sam named "Curiosity," ventured out towards us. He got braver and braver and eventually ended up about five feet from our vehicle. 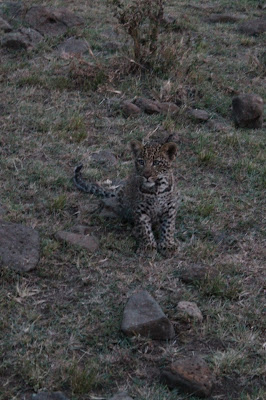 Unfortunately, it was getting dark, so even after playing with the settings on our camera, this is the best picture I could get. I decided not to share the 37 blurry photos I have of him :) You're welcome.

This ended the first drive of our safari. We had two evening game drives (from about 4:30 - 7:30), and two morning drives (from 6am to about 11am). This one just whetted our appetite for more.

*You can read about the first part of Day 10 here.