The Weekend What: Part One

The "what" in the title of this post refers to "what happened to our weekend?!" It was a crazy, mostly fun, weekend where we did ALL THE THINGS. And since we're an interfaith family it was doing ALL THE THINGS in both faiths.

We started off with our Christmas celebration with Tim, Janice, Tessa, and Willem. We had a yummy supper of soup and buns and it was so delicious. Except for the hidden cilantro in the appetizers! Ha! (And I should clarify that Janice and Dave love cilantro and Tim and I don't love cilantro.) There was a hilarious moment of Tim and I biting into the same type of appetizer and hurriedly handing the rest of it over to our spouse because every good marriage is based on the fact that you can count on your spouse to consume your half-eaten appetizer with the hidden cilantro! 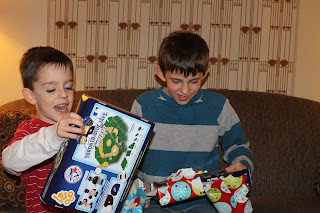 Then the kids opened their presents. After some consulting, we got the boys the same Lego-type Blue Jays set and they LOVED it. I love the looks of glee on their faces in the above picture. 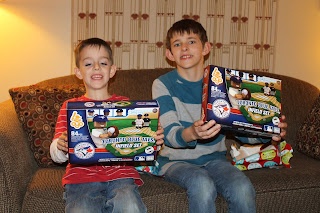 Rachel got an owl game which she also LOVED and we gave Tessa money towards a drum which she wants to buy. 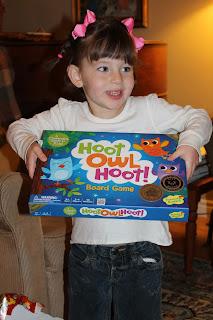 Willem kindly shared his Lego with Sam so Sam didn't have to open his until we got home that night. Can you imagine the chaos of two identical Lego sets getting mixed together?!?! Also, Sam worked on his Lego until 10:45 that night and I woke him up at 7 the next morning so he could finish it before Religious School. 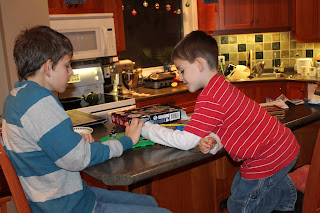 Willem also shares a lot of his clothes with Sam so here they are modeling similar jackets. Thanks for being such a great older cousin, Willem :) 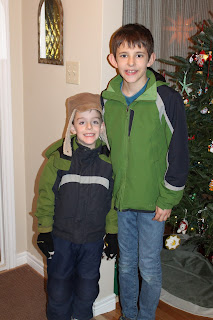 Then we headed off to the light display at our local park. The pictures below of all four kids give me hope that eventually our children will also look normal in pictures! Ha! 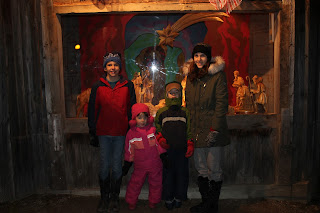 with the flash off, in front of the nativity set 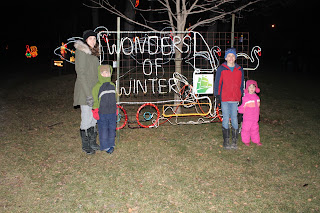 with the flash on, in front of the sign announcing the light display 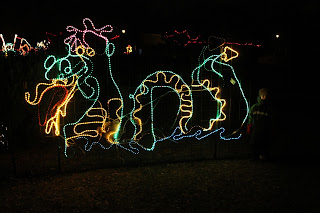 Sam LOVED this dragon and Tessa posed with Rachel in front of the dancer. I'm so glad we had this time together and we had so much fun.

Saturday I went to my friend's birthday party and then we had our friends' two boys for the afternoon. We decided to take all four kids to a carol sing at a senior's home. It was organized by our youth group but they invited others in the church to join them. As the four kids went racing into the seniors' complex, Dave remarked, "Tonight on your local news: In an ill-advised move, the Smith Jones family took four kids to a seniors' home today and 17 people were injured." (Where "Smith Jones" equals our last name.) I laughed but thankfully, the kids were super helpful in handing out the songbooks and actually all sat quietly and sang (or requested songs) for almost an hour. 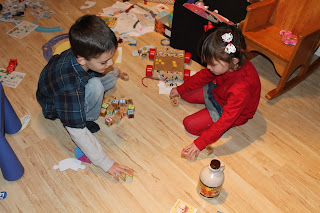 While Dave and I made supper, and did some Chanukah decorating, the kids played dreidel, using blocks as gelt. (And I'm not sure what the maple syrup is doing in this picture because it was supposed to be in the fridge.)

I'm getting as tired writing about our weekend as I was living it, so since this post is getting so long, I am going to end here. Tune in on Thursday for "The Weekend What: Part Two."
Posted by Natasha at 07:36