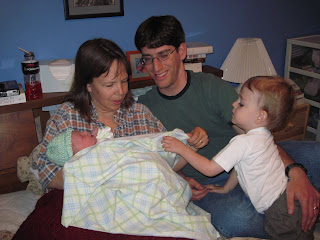 So yesterday was an eventful day! We had a midwife appointment at 2:30 and our midwife did a sweep of my membranes and gave me the recipe for a "go into labour" cocktail. It contained lovely things like castor oil and actual lovely things like apricot juice and verbena oil. I took it at 4pm with the understanding that we MIGHT get to meet our baby before midnight.

I was tired so went down for a nap around 4:40. At 5:21pm my water broke, waking me up. I yelled for Dave and then my mom and then left the bedroom to go find them. Dave was changing Sam and Mom was in the shower. I started to have contractions almost right away and they were long and intense. Dave was trying to make the bed and I really needed to lie down so he just gave up and I lay on the fitted sheet (which was flat-ish on the bed but not attached to it!) and the plastic tablecloth.

The contractions got very intense very quickly and I didn't know how I was going to make it through hours of this. Then I asked Dave to check if he could see the head and he could! I felt enormous relief at the thought of that and then with the next contraction the head came out and then Dave said, "The shoulders are out!" and it was over. Rachel Katie Krahn Chodos was born at 5:33pm, just a scant 12 minutes after my water broke -- which once again, was our first sign of labour. 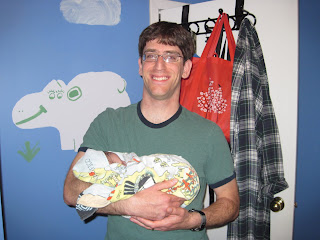 My mom came in almost right away to help out and our midwife, and student midwife, arrived about seven minutes after Rachel was born. My dad got to hold her when she was just 19 minutes old which was amazing. He cried and Sam spent the rest of the night mocking him for it :) However, there were no photographers on hand when my mom or dad first got to hold Rachel so we have no pictures of them holding Rachel that first evening. 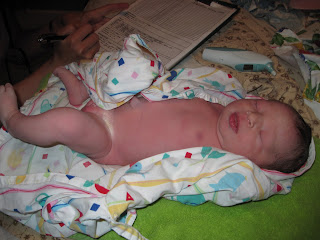 A couple of things I want to remember about Rachel's birthday:

1) Barb and Tracy gave me an awesome bed bath so I didn't have to take an actual bath (which I HATE!) or get up to have a shower. It was lovely!

2) Sam drew a picture (in his sibling book) of Baby Rachel and he made two blue circles which were "crying" and Baby Rachel was crying because "there is a mosquito in her room."

3) When Sam came to, officially, meet Rachel after we had decided on her name and she was dressed in clothes, as opposed to wrapped in a towel, we said, "Sam, this is your new sister, Rachel." Sam then asked, "Where is the other baby?" and we said, "What other baby?" and Sam replied, "The towel Baby." When he first saw Rachel she was wrapped in a towel so Sam was understandably, a little confused! 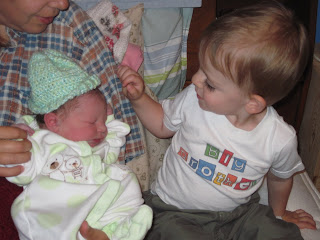 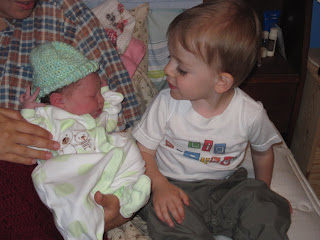 4) When Dave was taking pictures of Rachel and Sam, Sam wanted to hold Rachel's hand. Unfortunately in the pictures it looks like he might be about to hit her or pat her head, but in reality he's trying to hold her hand.

5) In passing me an open bottle of red Gatorade, Dave spilled a little bit and so on the plastic tablecloth there was birth mess on the bottom and Gatorade mess on the top. And also on me too! It was a little sticky :) Who knew a little bit of Gatorade could make such a HUGE mess?!?!? 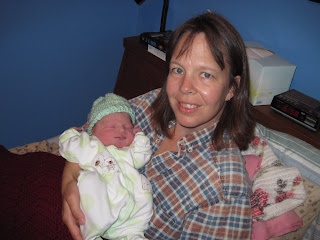 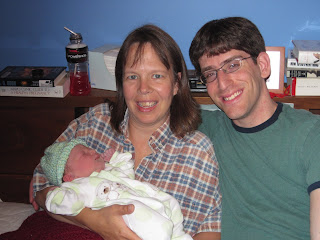 6) Rachel peed through her sleeper, or got some other mess on it, so at 3am we changed her into the second outfit of her life. Of course we went with super-pink and Dave even let me put the owl sleeper on her, which was my choice for a girl sleeper on the day our ultrasound confirmed we were having a girl :) Well I did actually start to write this post on Saturday, June 18 but I didn't get it finished until Monday, June 27. However I'm going to leave the post date as is because at least I tried to get it up in a timely fashion and I did make a pretty good start on it :)

So that was Rachel's birthday as seen from my point of view.
Posted by Natasha at 20:09