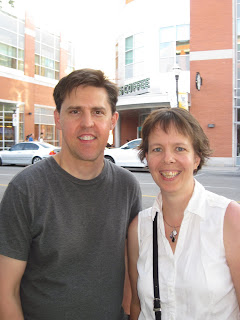 Janice had suggested going out for dinner to celebrate our birthdays at the beginning of May and we were so busy with moving that I said "Let's do it later." So Janice called Dave last week and said, "Let's go to The Works for a birthday supper; it's a burger place." Dave was, understandably, a little confused. Fun birthday celebration? Kid-less dinner? A burger place... Ah, but WHAT a burger place!

First of all, they serve drinks in 2-cup measuring cups! How can you not LOVE a place like that? 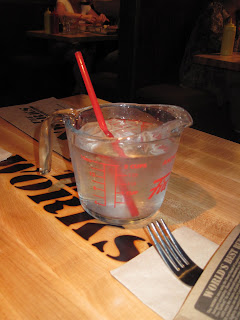 Second of all, they have a one dozen tower of onion rings as an appetizer. I LOVE onion rings! 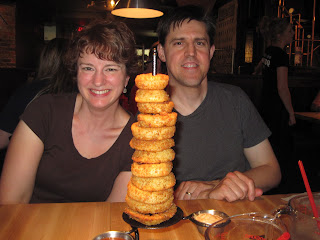 Third of all they have about 70 different options for burger topping combos. I had the Perimeter Burger which has avocado, sundried tomatoes and feta cheese. Can you say yum? (Not to mention Coke served in a 2-cup measure!) 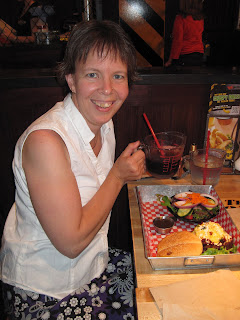 Fourth of all they came around with free beer samples. So Dave, who had ordered a Barking Squirrel beer also got a sample of Mr Huff's Beer. Which was pretty good actually :) 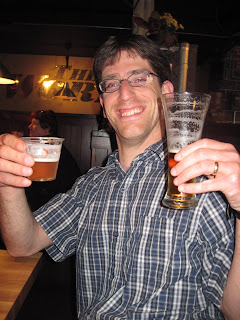 Fifth of all we were with Tim and Janice and what is better than having fun with great friends? 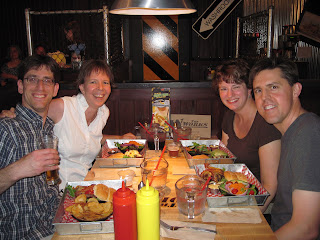 We all agreed it was an AWESOME way to celebrate two fortieth birthdays and we can't wait for another excuse to get to The Works to eat. After all there are another 69 burger topping combinations waiting for us to try them out :)
Posted by Natasha at 21:25