On September 27, Daniel Flaming and Lisa Outinen got married at the Toronto Zoo. And we were there to celebrate with them. 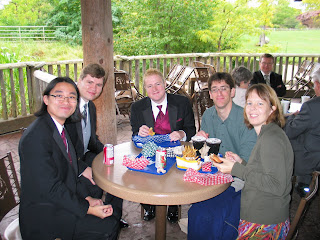 First order of the day, lunch with Donny, Dan,
Dan's brother Mark, and Marika, who took this picture. 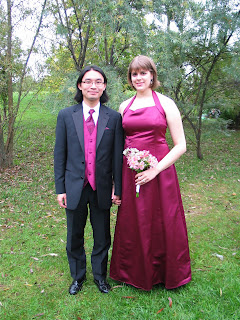 Donny made a stellar best man and Marika was a lovely bridesmaid --
even though it was a little last minute :) 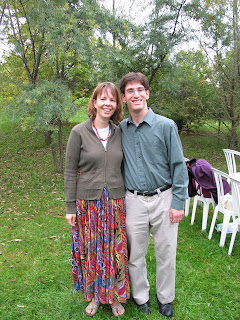 A nice picture of us at the wedding site. 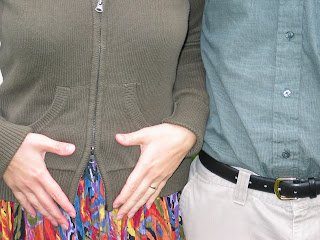 Attila was there too! 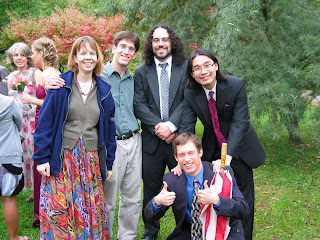 It was great to see friends again.
And to have a chance to visit. 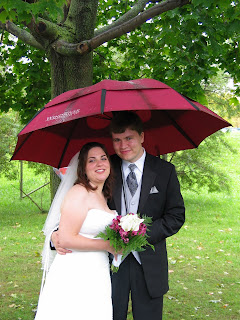 Dan and Lisa were happy, despite the rain. 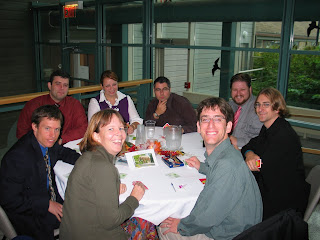 Not only was it fun to visit with friends again;
it was also fun to play games. Although we've never
played games at a wedding before! 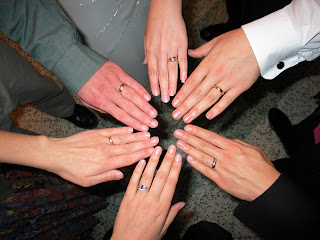 Three couples got married this year -- Donny and Marika,
Dan and Lisa, and us. This is all six of us with our
wedding rings all in place!

Posted by Natasha at 23:41 No comments: Links to this post

To Beijing and Back

Back in March, Dave submitted a course project to a competition on web services-based applications. Much to his surprise, the project was selected for the final round of the competition, and as a result he was invited to attend a week-long conference in Beijing!

The conference itself (the International Conference on Web Services) was pretty interesting; Dave got to hear about some cutting-edge research, and meet cool people from China, Germany, India, and the U.S. who are working on similar projects. However, the highlight for him (and likely for you, reading this) was getting a chance to see a bit of China.

Dave took three main side-trips while he was there. His first excursion was to the Great Wall, which he *really* wanted to make sure that he saw while he was there! It was well worth going to (even with the somewhat exorbitant taxi fare), and was an interesting mix of ancient architecture and very modern signs and billboards for the recent Olympic Games. 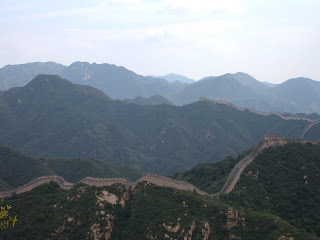 View of the Great Wall 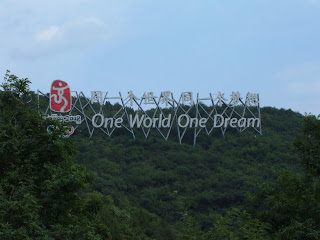 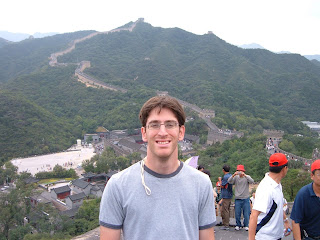 Dave on the Great Wall. Note the people with red ballcaps.
This was, apparently, the mandatory hat of Chinese tourists,
and there were crowds of them everywhere! 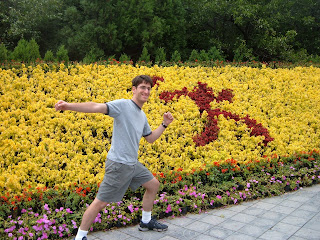 Dave mimicking a floral depiction of some Olympic sporting event...
Possibly softball? Or maybe ten-pin bowling?
Dave's next trip was to the Forbidden City which is, in fact, neither forbidden nor a city. It is a huge palace complex where various Chinese dynasties lived and governed for hundreds of years. The complex was huge, and even with an audio guide and an entire afternoon Dave wasn't able to see it all. Here are a few pictures which will give a flavour of what he saw. 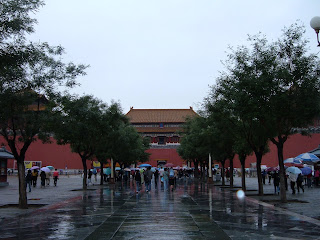 The courtyard outside the entrance to the Forbidden City. 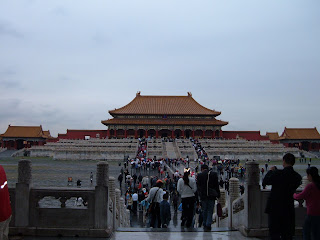 One of the first buildings in the complex -- perhaps a throne room of some sort? 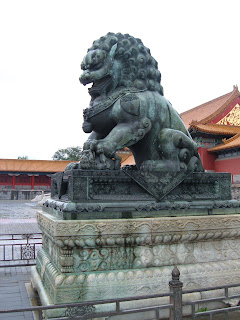 An intricately carved lion guarding one of the pathways into the complex. 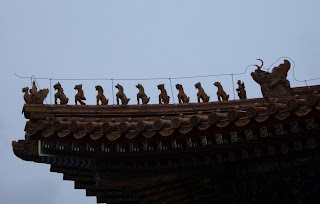 These small, gargoyle-like figures could be seen on the roofs of most buildings.
The number of figures indicated the importance of the building. 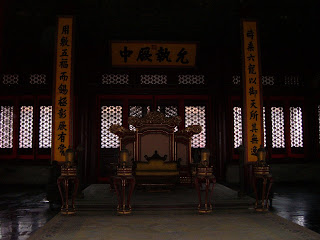 One of several throne rooms.
The banner over top probably explains what this one was for. 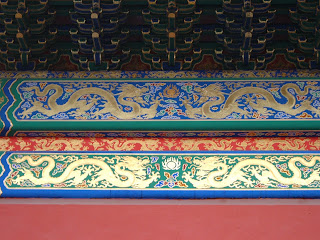 A bit of artwork under the roof of one of the buildings. 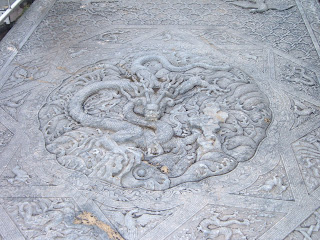 An intricately carved pathway, which only royalty was allowed to use. 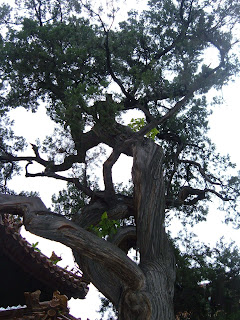 An ancient, gnarled tree in a garden near the back of the complex. 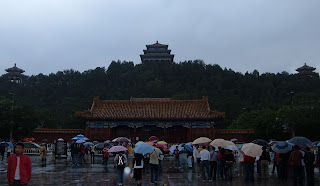 The view looking out the back of the complex, up into a hilltop garden and temple.

Finally, Dave took a trip to the Temple of Heaven, which is an ancient temple, surrounded by a large park. It was interesting to see similar architecture as in the Forbidden City, but in a slightly different context. The park was a lot of fun to wander around in, and Dave only got lost once :) 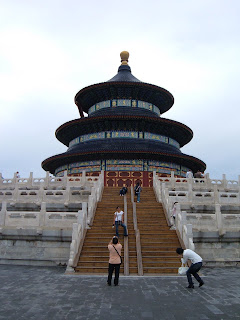 The Temple of Heaven. 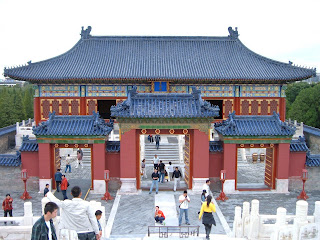 A collection of gateways leading to the Temple. 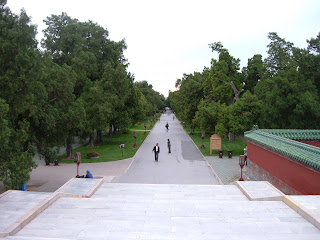 A view from the Temple into the park. 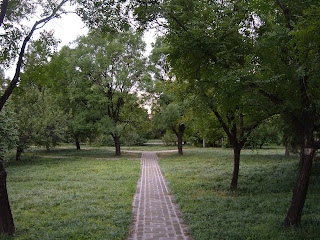 A pathway surrounded by trees. 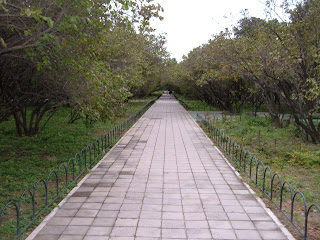 Another pathway, surrounded by a different kind of tree.
Finally, here are a few miscellaneous pictures from Dave's time in Beijing. 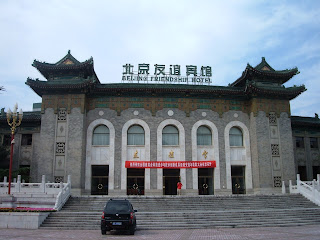 The hotel where Dave stayed, and which hosted the conference. 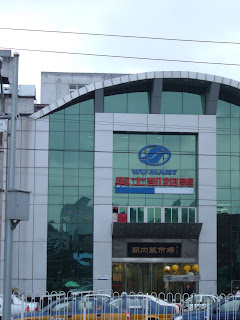 It's Wu-Mart, the Chinese equivalent of a certain well-known department store. 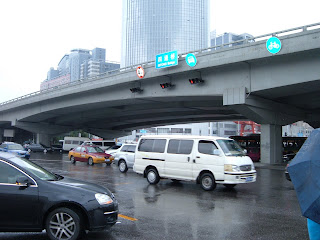 The traffic in Beijing was a bit nuts, as indicated by this chaotic photo. 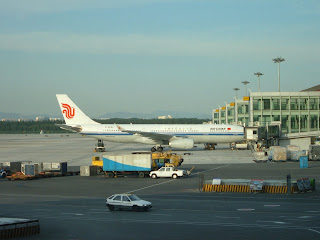 Eventually, it was time to head home...
Posted by Dave at 13:29 No comments: Links to this post