#tbt On A Friday

One of the reasons I am sad I haven't blogged regularly over the past few months is that I know there are memories which I have forgotten. So one of the things I want to do is write about some events before I lose the memories. I originally thought it would be great to do this as #tbt posts on Thursdays, and that may yet happen, but for this week at least, writing two blogs posts was a challenge, let alone two in two days. Ha! So here we go...

One of the challenges which working parents of school age children will understand is that, every once in a while, schools throw in random days off and your children become your responsibility again. For most of those days this past year, we were able to find childcare, but eventually I got tired of trying to arrange it. So at the beginning of June, I decided to take a "vacation day" to do "the job" I'd done for the past four years -- being a SAHM for one day. And yes, I didn't miss the irony of that! 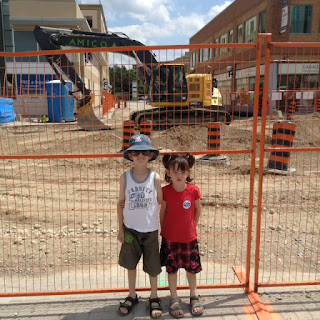 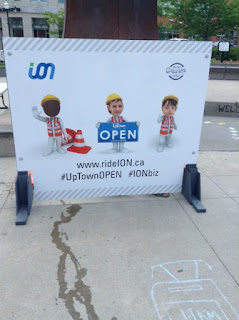 This particular day was really memorable because it reinforced the fact that I really missed these kinds of days. Our city is undergoing major construction right now, and a few of our main roads are closed, so our uptown decided to plan a whole day of getting people to support various businesses in the area. 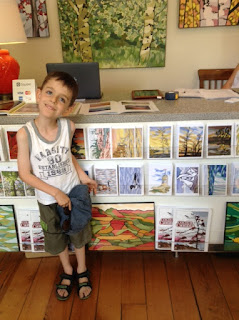 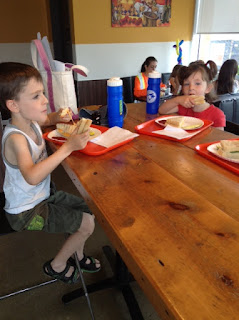 Some of the stores were handing out free samples and a few had arranged fun things to do. We spent a few hours playing games, trying out construction equipment, and eating some yummy food :) 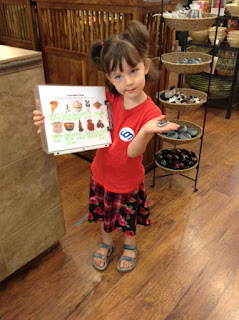 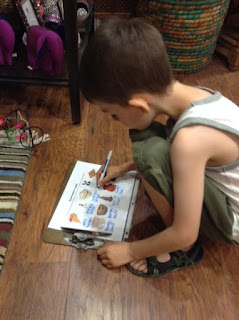 Sam and Rachel completed a scavenger hunt at one store. 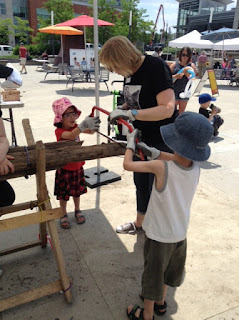 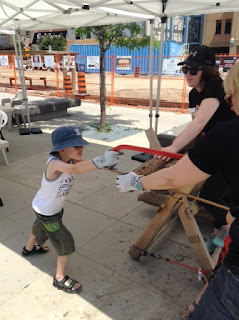 When our main street was being dug up, the construction crews discovered a corduroy road which was an exciting discovery. The kids got to each saw off their own piece of the road, which was pretty neat.

After all the sawing and trying out machines, we got some free yogurt. Yum! 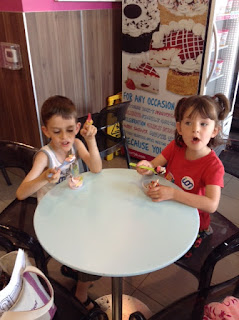 After that we walked to our pool. I'd love to write a whole post about how much fun we had at our pool this summer. And after we discovered it was only a fifty minute walk to get there, we ended up doing that a lot. 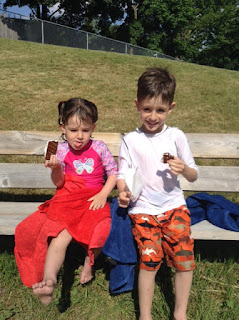 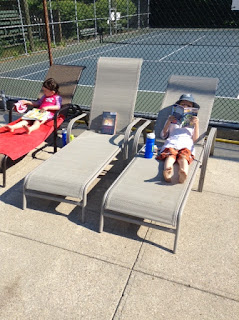 Of course, we usually bribed the kids with Starbucks fraps or a treat at the pool to get them to walk without complaining : 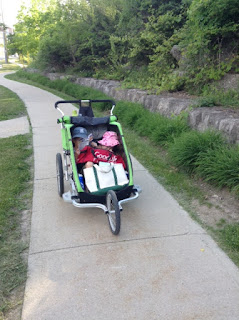 And after a long day of walking and swimming, the kids got to ride in the Chariot. We stopped at Zoup! for supper since Dave was going out for the evening and I didn't want to cook. 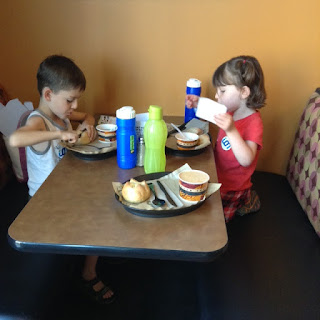 Then we came home and watched the Blue Jays game. I probably haven't explained it well, but it was a really great day of hanging out in our city, having fun with the kids, and just enjoying life without being in a rush. It was one of those days which really did feel like a vacation for all of us, and for that, I am so thankful.
Posted by Natasha at 10:51 2 comments: Links to this post

Labels: Kruisin' KW, Not our neighbourhood pool, Working For The Weekend, Yummy food

Returning To Blogging With "Currently..."

It's been almost a month and a half since I've last blogged, and about five months since I've blogged with any regularity. I've thought about just saying "Good-bye" to the blog world completely, and maybe some of you are thinking I've already done that, but I'm not ready for good-bye yet.

I've also been really slack about my blog reading and commenting lately, but I read Emily's post the other day and was inspired to try and blog twice this week. I figured since it had been such a long time since I last posted, the best way to get caught up was with a "Currently..." post, so here you go.

Listening... Well it's September baseball so we've been listening to a lot of Blue Jays on the radio. I'm hopeful they'll get a Wild Card spot and win that one game (no pressure though!) to advance to a playoff round. We love our Blue Jays around here, but you might have guessed that one already :) 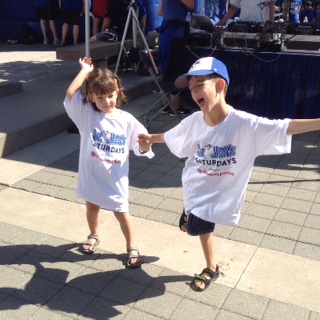 Sam and Rachel got free t-shirts at one of the games
we went to this summer!

Eating... Lots of CSA veggies and lots of muffins and lots of fresh buns. Since September I've had a regular bun baking day every week and it's been great! We've also had muffins in the house continuously since the beginning of September which I love eating for a quick snack. The kids are loving all this baking too :) 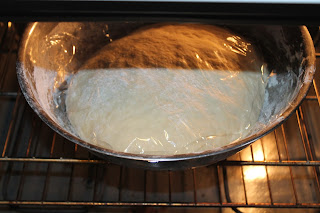 It's a little hard to imagine but this eventually
turns into delicious buns!
Drinking... Well, I'm trying to cut down on the coffee-hot chocolate and Coke but I've not been very successful at it. I have started drinking some flavoured fizzy waters though so I'm hoping that will be a good transition from Coke to just plain water. I don't know why I struggle with this so much. 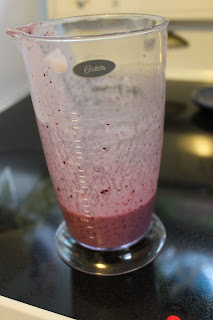 We've also been drinking smoothies every morning. Yum!
Wearing... I don't know what to wear these days. The mornings are cool and the afternoons are hot and I am not always at home to change in the middle of the day. It's been a struggle although in the past few days I have given in to wearing pants, as opposed to shorts and capris, for the first time in about four months. And I won't even go into the daily struggles I have with Miss Rachel about clothes these days. I thought I had until she was a teenager to fight about clothes. Yeah, not so much. 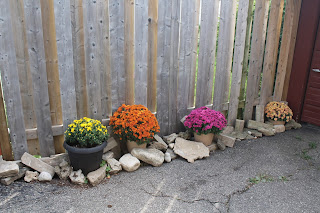 Let's just say it's much easier to dress the yard for fall. Ha!
Feeling... I'm so thankful for my new job which allows me to earn some money and keep up my work skills a little while also allowing me to bake buns and muffins and take an afternoon nap every once in awhile.

Weather... It's a mix. (See above under "wearing.") I'm glad it's gotten a little cooler since we had a really hot summer. No, it was not as hot as the Southern US but it was still plenty hot enough for me. We've had a lot of rain these past few weeks so I'm thankful for every sunny (read: laundry hanging!) day we get. 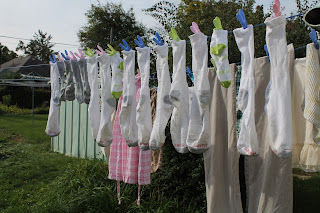 Today's a laundry hanging day :)
Wanting... I don't actually want much of anything right now which is nice. Maybe some more time to blog and a few more muffin recipes! Ha!

Oh, I also want the Blue Jays to win every single game in the next week, and the Boston Red Sox to lose every single game so that the Jays will clinch the American League East. Since the Jays are only one game away from being eliminated from that race, and, up until last night, Boston had won eleven games in a row, I don't think this is very likely. A girl can hope though...

Needing... I need to make some time to go grocery shopping. Sadly, this week has been one where I haven't been able to make that happen yet and things are getting a little desperate around here :)

Thinking... About a friend who is going through a really hard time. My friend is constantly on my mind (if you don't mind a bit of ambiguity, she could really use some prayers right now), and I feel a little too far away to be very supportive of her. 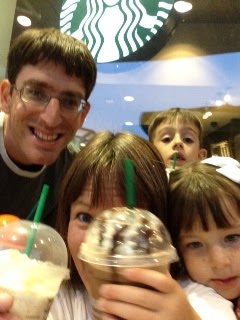 I am also thinking about how much I miss
Family Festivals Of Fraps,
as we called them this summer.
Enjoying...The stage of life our kids are in right now. It feels like in the past two months we are having much fewer struggles with the physical stage of life they're in and just able to have a lot more fun. I remember a friend of mine saying that ages six to about eleven are the sweet stage of parenting because the trying physical stage is over and the trying emotional stage hasn't started yet. If these past months are any indication, he is right and we are in a sweet stage. For those of you who haven't hit this stage yet, let me be a beacon of hope to you that it IS coming :) 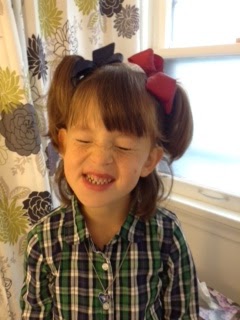 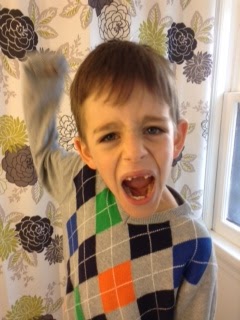