The Art of Moving

Yesterday the movers came and took all of our stuff. In some ways it was less tiring than the days of packing leading up to it and in some ways it was more tiring. I think yesterday was more emotionally exhausting for everyone. So by last night I was ready to crash which is why this post is delayed. However I've made up for it with TONS of pictures, so sit back and read on.

The moving truck pulled up at 9:00am (we were expecting it anytime between 8:30 and 9:30) and Dad and I jumped up out of our seats like a bell had gone off. We needed to move the cars and truck, which had been holding the truck's spot. Sam followed us out the door and watched things unfold. He didn't even take the time to put on boots or a jacket. And it wasn't that warm out. 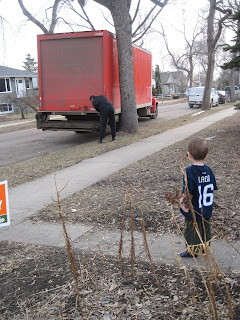 Since we are taking some furniture with us which my parents had been storing (a few desks, a dining room table and chairs, etc), Mom and Dad drove up in the truck which had been specially prepared. 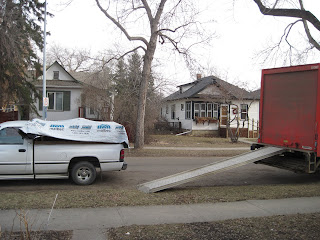 Here is the truck with the weatherproof tarp taken off, and showing off the cattle racks Dad built especially for this trip. 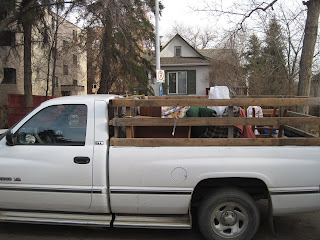 Sam spent the first part of the morning sitting on one of the chairs in the back of the truck. I think he had a good vantage point! 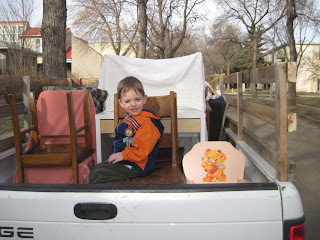 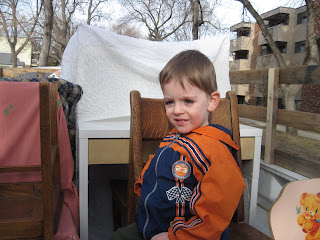 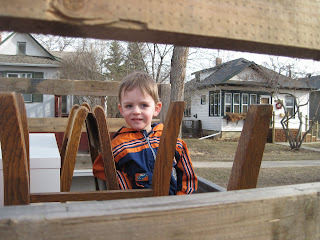 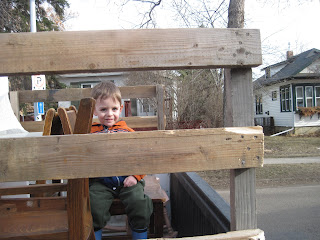 Then Sam decided that the steering wheel and window "needed to be fixed" so he borrowed a pair of Opa's pliers! 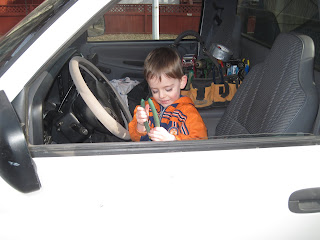 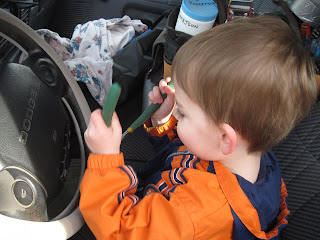 The he took the truck for a drive! Ha ha ha! (Okay, not really, but seriously, doesn't he look like he's a ninety year old man out driving and peering over the steering wheel in this picture?!?!?!) 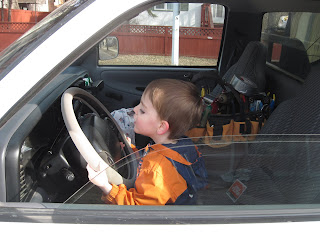 We had to tape up the drawers of some of the plastic organizers and that job fell to Dave, while I was helping one mover with inventorying our stuff. Dave was so proud of the job he did on the organizer that he took a picture of it. I'm mostly posting it because he was so happy about it :) 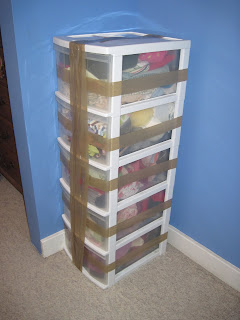 Opa and Sam relaxed on some chairs... 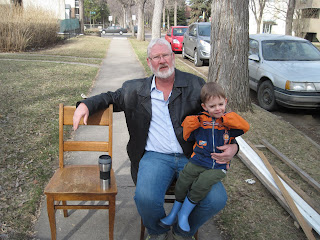 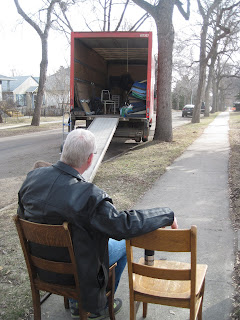 ...while Rachel relaxed in the "Moving Day Bumbo" as we called it! Ha ha ha! 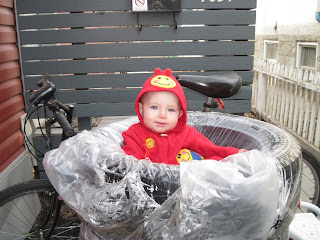 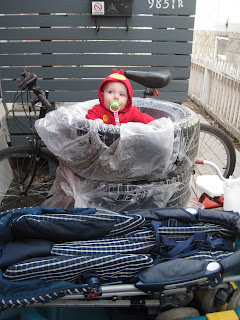 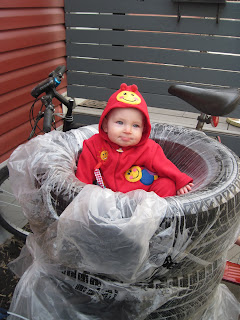 Then Sam tested out the special rocker Oma is giving to Rachel... 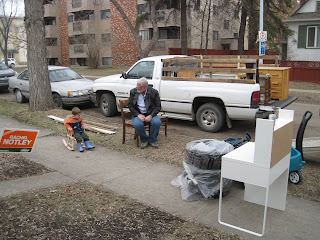 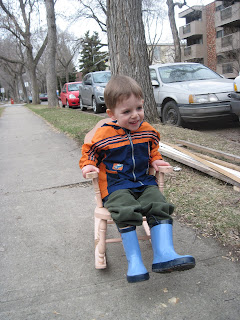 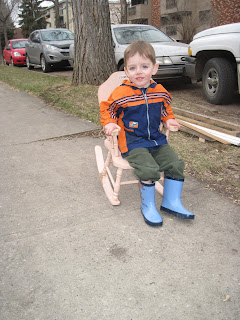 I realized that we don't have a lot of expensive or antique furniture, but looking at these shelves Dad made for me when I was about ten, or so, or the mahogany sewing desk my grandpa made for my grandma, I realized we have a lot of furniture I feel quite sentimental about. 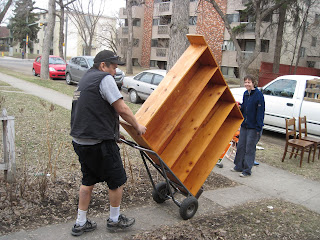 From the pictures it looks like Sam and Opa hung out by, or in, the truck for most of the two and a half hours the movers were here for, but I think they actually did! 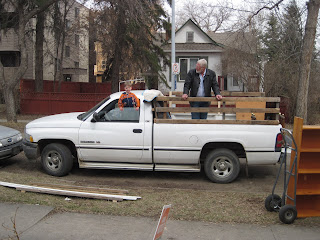 And finally, all of our stuff was on it's way. See you in KW! 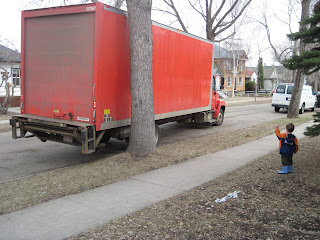 Then we were exhausted and headed to Route 99 for lunch. 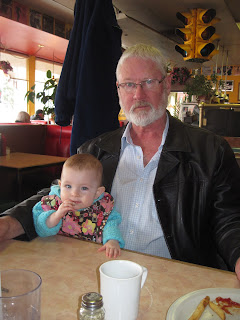 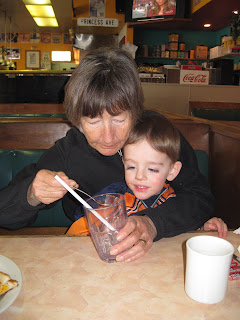 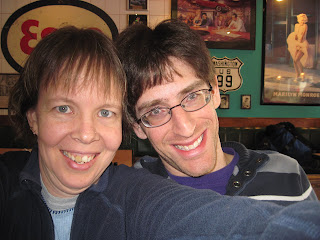 In the afternoon Dad and I took our two change tables to Once Upon A Child where they bought both of them for a good price, then we went to Southgate and Dad bought an iPad and then I bought a funky looking broom at Dollarama for about $4! I had to buy the handle and brush separately and then also a dustpan so it added up :) Then we all relaxed at home for the afternoon, except for vacuuming and I organized what was left of our stuff. (see tuned tomorrow for what our "new space" looks like!) For supper we went to Billingsgate Seafood. The food was good but they've changed to a cafeteria-style type place so it was a little different than what we were expecting. 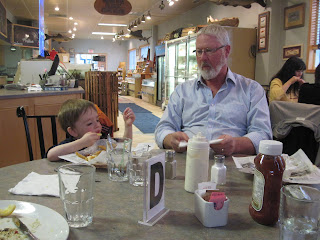 And with that, moving day was finished, a thing for which we were very grateful. See Rachel is so happy she's clapping! 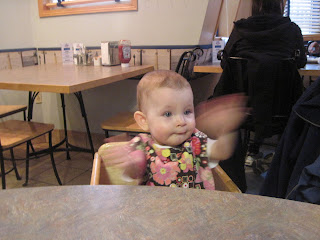 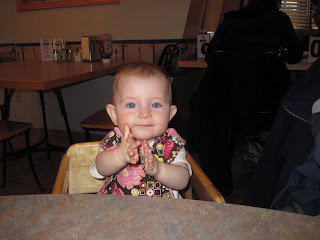 (The title is the slogan which was on all the Premiere Van Lines logo and was on all of the boxes we got from them. Dave and I tended to call it "The Insanity of Moving" which we felt was a little more accurate.)
Posted by Natasha at 19:03