Every once in awhile I try to imagine what it's like to live for 100 years. Can you imagine 100 years in the future? What will be the same? What will be different? The reason I think about this is today is my Grandma Ewert's birthday. She is 104. She lived on her own until September and now she lives in an assisted living place where she gets all her meals and her apartment cleaned and her laundry done. But she doesn't have nurses popping in on her 24 hours a day, so she is still (kind of) on her own. 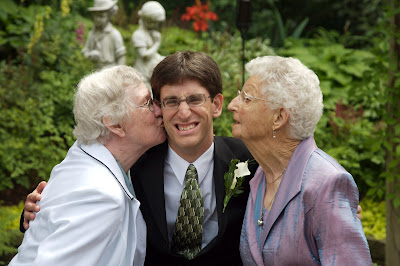 My two grandmas kissing Dave on the cheek on our wedding day, June 28, 2009.
Grandma Ewert was 101 here. She is on the right in the purple.
She has seven children, twenty-one grandchildren and numerous great-grandchildren with a couple on the way this year. She has said good-bye to her husband of almost 60 years, two (oops, make that four) sons-in-laws and two great-grandchildren. She was the oldest of 17 children. 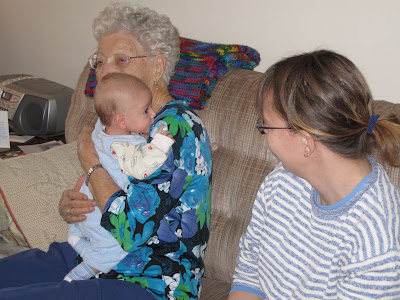 Grandma meeting Sam. Sam is exactly 102 years and three weeks younger than she is.
I never imagined that Grandma would be at my wedding,
let alone get to meet any of my children.
She has an amazing faith in God and loves her family. She will do anything for them. And has. Her grandchildren have been slower to marry and so when she was 98 1/2 she started giving us our "wedding presents" whether we were married or not! I got a crocheted table runner which she admitted she had mostly done in the middle of the night when she couldn't sleep. Because she didn't want to worry her neighbours she would crochet in her bathroom, which was the only room without windows! 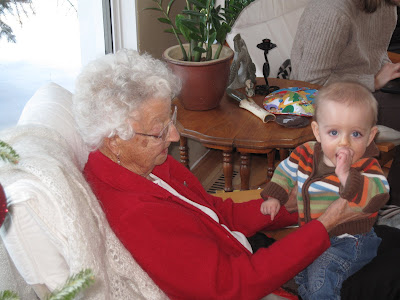 Grandma enjoys a good game of Scrabble and Dave is always willing to oblige her. Which makes me happy because I can't stand Scrabble! I think she and Dave are pretty evenly matched which gives Grandma a good game :) 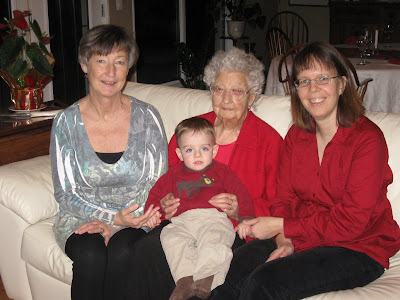 Four generations of Ewerts this past Christmas 2010.

Sam loves his Ur Oma ("great-grandma" in German) as he has started to call her. When we dropped her off at home after Christmas Ur Oma offered him a ride on her walker. We went back to visit her in February and Sam insisted that "Sam ride" so Ur Oma walked up and down with him on her walker. Sam LOVED it! And I think Grandma gets a kick out of being called Ur Oma by this little guy :) 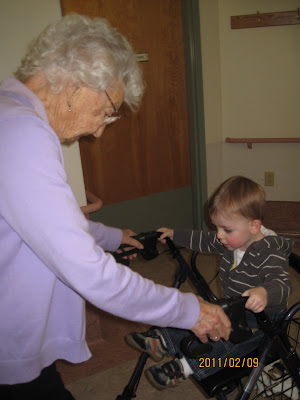 I love my Grandma and I'm glad she has been in my life. I know so many people have been inspired by her and I wanted to share a bit about her. She is amazing and I love her. Happy Birthday Grandma!
Posted by Natasha at 17:28