The Party to End All Parties

About a month ago Dave and I sent out the following e-mail to about seventy people:

Given that:
1) On April 27 we moved back to Kitchener-Waterloo, and;
2) On May 2 Natasha turned 40, and;
3) On July 20 Dave will be defending his PhD thesis in Edmonton (hopefully successfully!);

Therefore let it be declared that on Saturday, August 4 from 3pm until 8pm you are invited to celebrate with us!

We will have burgers on the BBQ (meat and veggie alternatives), salads, non-alcoholic beverages to imbibe, and dessert to be eaten.

You are not required to bring anything but if you want to, Natasha will be happy to accept a small offering of your favourite tea to re-stock her tea cupboard, and Dave will be grateful for a bottle of your favourite beer to revive him from the pressures of completing his PhD!

Sam already has plans to entertain your kids both big and small so bring the whole family!

Thirty people RSVPd in the affirmative (note to self: next time you have a party DON'T hold it on the long weekend unless you want low attendance!) and we were good to go. 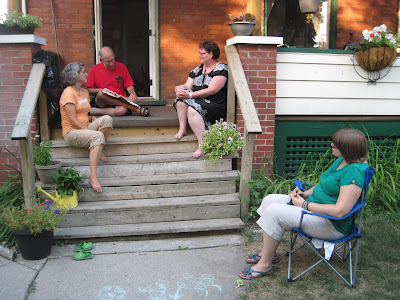 We had a good mix of people, young and old, family and friends, and various circles overlapping. Some people came early and left before supper, some people came later and enjoyed good food (we hope!) and good conversations. 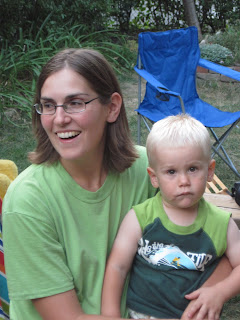 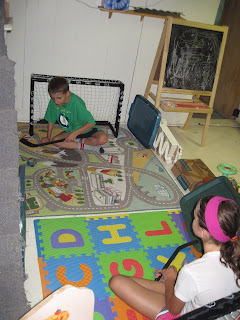 It was a hot day and by the end of the party the internal temperature of our house was a hot 31.9C so I think the housewarming was a success! Ha ha ha! 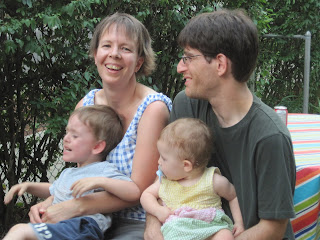 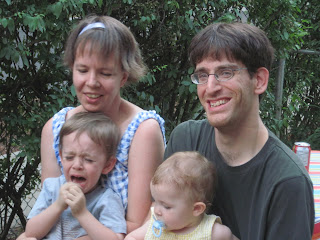 Dave's parents wanted a picture of our family to send to the nurse who took care of Dave when he was a preemie (born at 26 weeks and in the hospital for most of the first year of his life). They wanted to show how far he'd come! Sam was very sad about having to leave the sandbox for the seventeen seconds it took to get the picture. 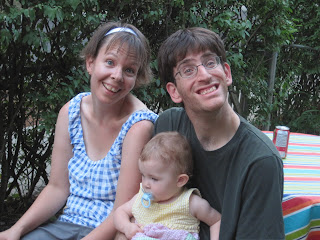 We took one without him in defeat. And what was Sam doing during this time? Still crying in the sandbox! Ha ha ha!!! 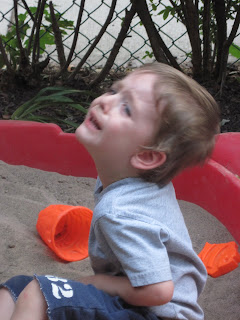 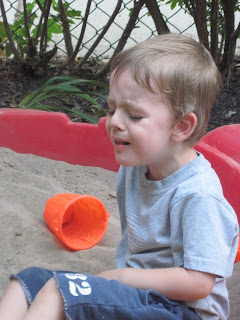 Life is tough when you're three and
a lot tired :)

And we got a lot of cards wishing us well and I got exciting tea for my tea cupboard... 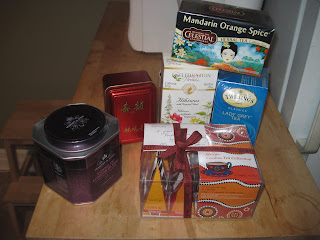 ...and Dave got a whole choir of interesting beers. (I think they look like a choir all lined up and this isn't even all of them! Some beers Dave got twice and he has drank some already.) 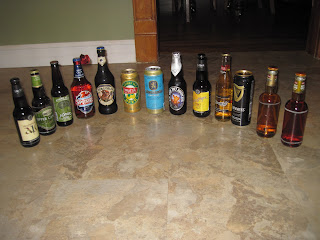 And a close-up view of the different kinds. And yes, Donny and Marika brought us each a "Lemon Tea Beer" in a winning combination of the two requests! Awesomeness! 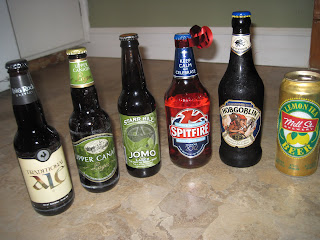 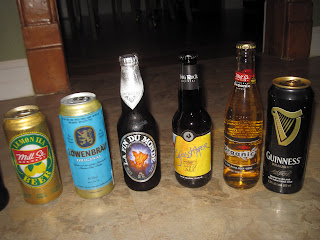 And as an extra birthday surprise, Dave asked each attendee to bring me a book suggestion to read since I love reading. I ended up getting some actual books as well (which is AMAZING!) and a lot of great suggestions so I'm looking forward to some time to read.

This was an awesome party and not only will I no longer be bitter about not having had a 40th birthday celebration closer to my birthday, but I am so thankful for all our community of friends and family here. This definitely was the "party to end all parties!"

(Note to self: That doesn't mean you aren't ever holding another party again! Ha ha ha!)
Posted by Natasha at 21:35