This is the last post in the series of photos celebrating Natasha and her 40th birthday. The tone of the previous three posts has been somewhat serious, highlighting various aspects of Natasha's life that are important to her. This post is not quite so serious.
In this post, I'll highlight a few of Natasha's character traits, interests, and quirks that I think are particularly funny, impressive, or otherwise noteworthy.
1. Natasha is an avid bookworm, and has been known to have a dozen books on the go, ranging from Nora Roberts to J.D. Robb, and everyone in between :) 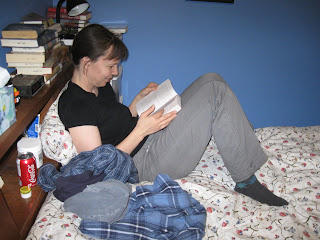 An action shot of Natasha, in the midst of a good book (April, 2010)
2. Natasha loves to garden, and has a talent for getting a garden to grow under adverse circumstances. 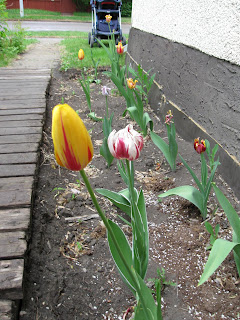 Some Rembrandt tulips growing in the
little garden beside our house in Edmonton (June, 2009)

3. Natasha has travelled the world, visiting 37 countries by plane, train and camel. She has also lived in a wide variety of places (including several Canadian provinces, Germany, the U.S., the Netherlands, and Israel-Palestine). 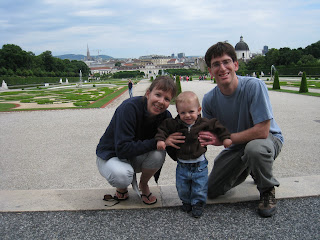 4. Natasha can be quite sentimental about certain things, such as our old car. It was a Hyundai Accent hatchback, and we named it Sean. She frequently referred to Sean as an "ankle biter", and loved his character. She was very sad when we had to get a larger car for our growing family. 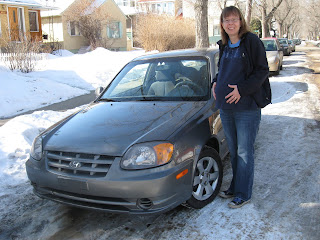 Natasha with Sean, shortly before we sold the car (March, 2009)

5. Natasha is an enthusiastic tea drinker (coffee, not so much). She enjoys trying new kinds of tea when the opportunity comes up, and especially enjoys going to cafes and restaurants for "high tea" on special occasions. 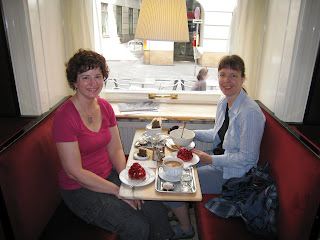 With Janice at Cafe Diglas in Vienna (May, 2010)
6. Natasha enjoys baking biscuits, muffins, and especially cookies! :) She has a few stand-by recipies, most notably her double chocolate-chip cookies. Mmmmm... 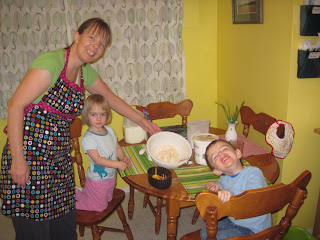 Natasha showing off some biscuits that she baked,
with help from Sam and Kelsey (January, 2012)
7. Natasha is multi-lingual, having at one point spoken Dutch, German and Arabic. She retained enough of her German to carry on some fairly rapid conversations while in Vienna a couple of years ago. 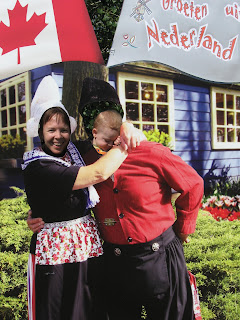 Posing with Sam near the Dutch tent at the
Heritage Festival in Edmonton (August, 2010)
8. Natasha grew up on the Praries (Saskatoon, to be exact) and has a love for the flat terrain and big skies that they offer. 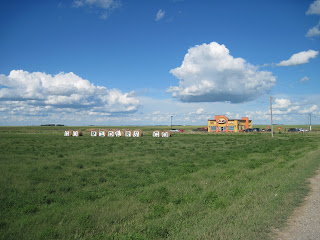 A roadside A&W (with "GO RIDERS GO" hay bales) south of Saskatoon (July, 2011)
9. Natasha has, over the past few years, become a big fan of Polka Dot Piggy, a design company run by her cousin Kara. Kara creates bibs, reusable snack bags and (as can be seen below) aprons, using various colourful and funky fabrics. 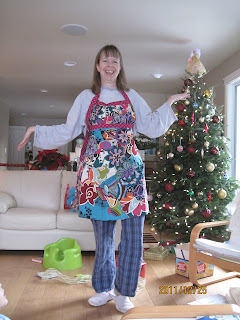 Natasha posing with the apron she received from
her parents for Christmas (December, 2011)

10. Although Natasha is not a big sports fan, in general, she is definitely a Riders fan! The Saskatchewan Roughriders play in the Canadian Football League, and for people in Saskatchewan, they are literally the only game in town, since there are no other major professional teams in the province. As someone who grew up in Ontario, I am not nearly as avid a fan as Natasha, but let's just say I am growing to appreciate her fan-dom :) 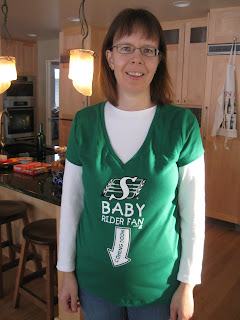 Making it clear who the next member of the family (Rachel)
would be rooting for (December, 2010)

I will now hand control of the blog back to Natasha, but hopefully you've gotten to find out a bit more about the belated birthday girl. Happy 40th birthday, Natasha!
Posted by Dave at 11:44