I'm calling this post "Last Chance Blog" because starting tomorrow I am going to blog everything I do for a week. I know I promised this to you starting on Monday but then Rachel got sick and I wasn't going to write about being stuck at home all week. I am just not a stay-at-home, stay-at-home mom. I like doing things with my kids and they like doing things too. I did this last year and you can check it out starting here. After this coming week (yes, I do a full seven days, after all I do things on the weekends too!), I am going to take a word-blogging break and post a "Picture of the Day" for the next week. Again, I did this last year and I felt like the two weeks together were about two week's worth of "normal" posts. So read, or not, and learn more than you ever wanted to know about my life.

So for today I am going to post some pictures and talk about some things which have happened in the past week, and which I haven't had a chance to blog about yet. 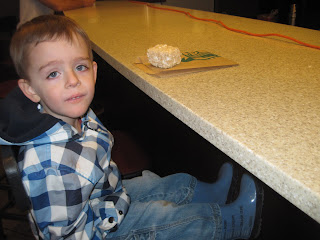 Last Friday Rachel was just coming down with her week of sickness (which is done by the way!!!), and so Dave came home from work and stayed with her while I picked Sam up from school. Then Sam and I had a date at Starbucks. As you can tell by the above picture he was thrilled! No really, he was. He just never looks normal in pictures. 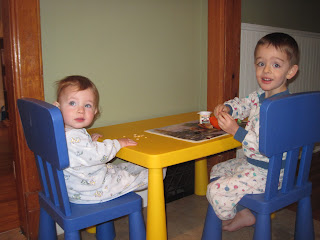 On Saturday, Rachel wanted to sit at Sam's table with him. What happened to my baby?!?!?! 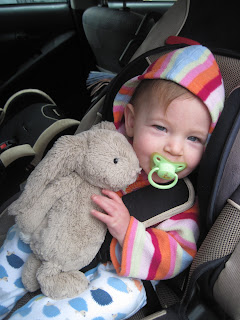 Yesterday, Rachel was hugging her bunny, which we call Funny Bunny (Sam named it so don't ask as I'm not even sure why he called it that but now we all do), and I got all sad thinking about The Velveteen Rabbit and how Rachel had been sick. If Funny Bunny had to become "real" I think I'd totally be sobbing since Rachel has become very attached to him. When we bought it for her way back when we had no idea how important he would become to us her. 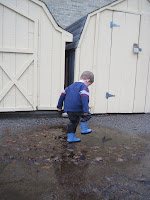 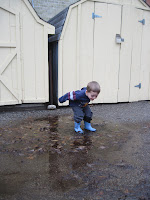 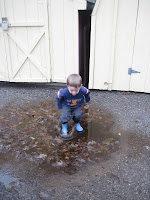 Sam wanted to jump in the puddles yesterday after school, and because he'd been cooped up inside because of Rachel being sick I told him to "Go for it!" which he did with abandon. He ended up getting so wet he went home without pants on! 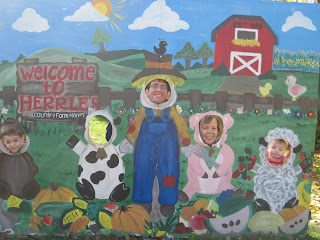 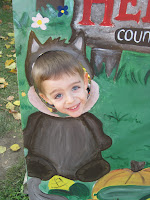 We went to Herrle's again on Sunday to get our pumpkins. We got a farm family picture and of course Sam was only looking at the camera for the individual picture of him. Three-and-a-half-year-olds -- the master of awful pictures :) 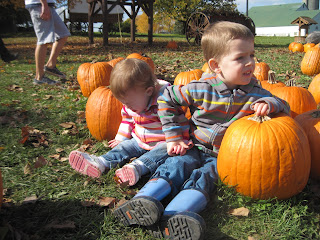 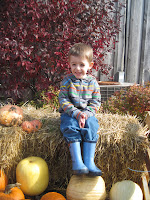 I wanted a picture for the blog header but Rachel was sad and Sam was distracted by a bus. Then we moved to the hay wagon and got this awesome picture of Sam by himself. You can take back what I said about three-and-a-half-year-olds above :) And as you can tell from the new blog look, we did manage to get a picture I was happy with. (ie both kids look halfway decent!) 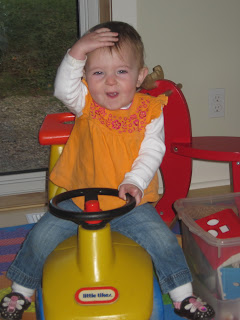 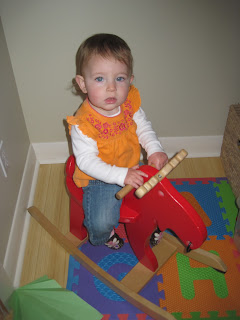 Rachel perked up a bit for Nathan's birthday party and had some fun when she wasn't screaming. Poor kid.


And that's what's been going on around these here parts. What have you been up to lately?
Posted by Unknown at 22:37