So what did we DUE today? Ha ha ha!

Well Dave had a (very) early eye appointment so Teresa (thank you soooo much!!!) came over at 6:30am to hang out while Sam slept, so Dave and I could go. We sat in the first waiting room for over an hour which was stressful and reduced me to tears a few times. Then finally Dave was called in for the eye exam and then transferred to a doctor's cubicle. Unfortunately by that time I had to go, and just our luck, Dave was done and out of there five minutes later. Turned out I could have waited but I didn't know that :( sigh...

So I came home and Dave headed to campus for his meeting with Eleni. Which turned out to be canceled. So Sam and I got ready at home and Dave headed to the Kinsmen Centre to take Sam to his swimming lesson. Thankfully I just had to be the chauffeur and photographer. Some of the best shots I got were on video and since I still haven't successfully uploaded a video to this blog from our new camera I'm not going to even try. Sorry. But here are some pictures: 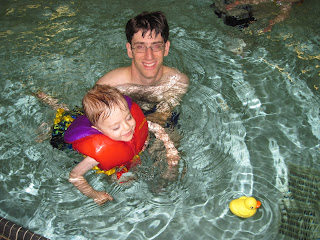 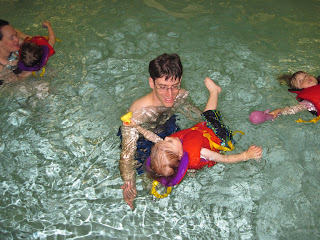 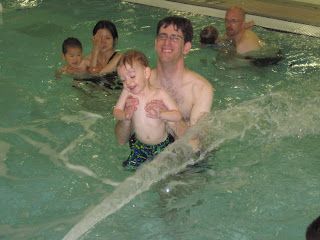 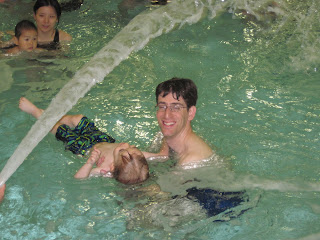 Then we headed to Shopper's to fill Dave's prescription and they were having an awesome sale on diapers so we stocked up for our time in Saskatchewan this summer. Then we came home and had lunch, and I went down for a nap. So did Sam. I woke up in time for my parents arrival.

Mom and Dad decided that they couldn't wait by the phone any longer for a call that Knut was on his/her way so they just came today. I say "YAY!!!" We had potato salad, BBQ sausage, fried mushrooms and steamed asparagus for supper. It was soooo yummy! The only unfortunate thing about supper was that Sam started spitting and got a time out. However it was kind of funny because when I went to get him from his time out, he announced, "I spit!" and I said, "What happened then?" and he said, "I got a time out." and I said, "Was that a good idea or a bad idea to spit?" and he declared, "Bad idea." This child seems to be getting the concept :)

After supper we sang Happy Birthday to Mom since it was her birthday and all, and as soon as we finished Sam said, "Now we eat cake!" but we had no cake. So Sam and Opa went to Safeway and got a cheesecake sampler which rocked! It was sooooo good! Then Sam had a sugar high and I had a sugar crash and am off to bed.

By the way, today is Knut's due date but he/she hasn't gotten the message as of yet. We'll see what tonight brings... Or doesn't bring as the case may be!
Posted by Natasha at 23:38