I got the call to pick up Dave on Saturday morning and the surgeon gave us the BEST NEWS EVER in that Dave only needed to lie on his left side to sleep, which was irritating but no where near as invasive as having to do it for an entire week! But he still couldn't lift Sam.

During the previous two days we had gone back and forth between "Do we go to Saskatoon so Dave can really recuperate or not?" On Friday night Mom and Dad announced that they would just come to Edmonton. That was a huge relief :)

Dave was quite tired from the anesthesia and had a two hour nap every afternoon and slept 10-12 hours at night as well. He had headaches off and on and his eye was irritated but thankfully, there wasn't a lot of pain. He also wore his new cover-everything sunglasses and hat for most of the week. 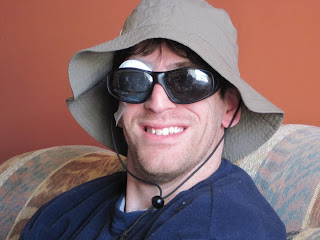 The other thing that hit on Saturday afternoon is that my back (or hip or butt) decided to have a major pain. We thought it might be from the lying upside down on the ironing board. Anyways, Sunday I walked with Mom, Dad and Sam to Shoppers and then I simply couldn't walk anymore. And I wasn't going that fast to begin with. Mom, Dad and Sam went to Save-On without me and then Dad went and picked up the car to drive me home because I just couldn't do it.

I was sooooo glad that Mom and Dad were here because both Dave and I were in bad shape. Dave called us "Limpy and Squinty." At one point I was crawling from one end of the house to the other because it was easier. I went for a massage on Tuesday and though I tried to tell myself I wasn't expecting miracles, it seems that I was because I was very disappointed when I couldn't walk any better afterward :(

In the midst of this though, there were some lighter moments. One night we decided we needed ice cream and we went to Dairy Queen and ended up with quite a bit of ice cream. Sam, in particular, was in heaven :) 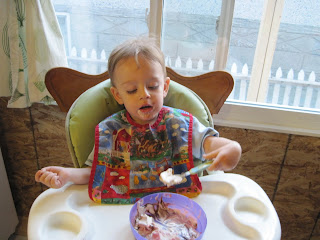 The other saving grace was that the weather was absolutely beautiful that week. We spent lots of time outside, especially Oma, Opa and Sam. One day the big excitement was that the power pole in our back alley was replaced. This provided much of an afternoon's entertainment. We also BBQd quite a bit which was also lovely. 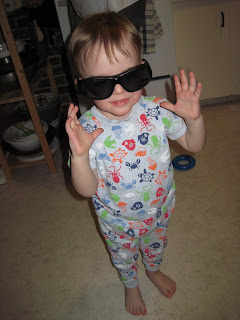 On Wednesday we went to see Barb and she shared with us the good news that Knut had turned, which was a HUGE relief. She also confirmed that going to Saskatchewan for the next week would be okay, in terms of Knut's arrival and my health.

The next day Dave had another appointment with the retinal surgeon. This appointment took half an hour from the time we arrived at the office until the time we left. We COULD NOT believe how fast it was. And the news continued to be good all around. Dave no longer had to spend time on his side, he could lift Sam and work "as much as his eye would allow." We decided to head to Saskatoon for about a week so that Dave could work without having to worry about saving strength for Sam, and Mom and Dad could help with Sam, since I still couldn't really walk.

One very funny story about the week is that I wanted to switch over our winter clothes and get out the spring clothes. So Dave and I spent about an hour or two one morning doing that. At one point Sam had been fairly quiet so we went to see what he was doing. "Sam's doing clothes too!" he announced, and indeed, he had pulled all his clothes out of every dresser drawer. I guess that's what he thought needed to be done. So below is Sam's "doing clothes" and Mommy and Daddy's "doing clothes." I guess they don't really look all that different, if you're two! 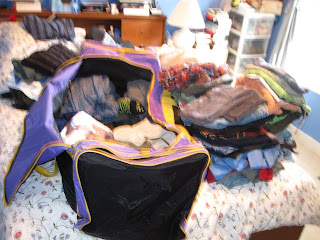 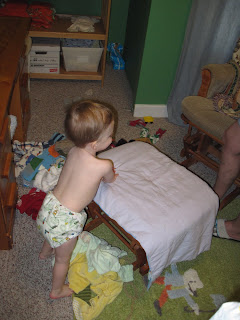 Labels: Family, Knut, Making It Through, Pregnancy, Sam, Visitors, We Are Healthy (Or Not), Yummy food