Just to give you a heads up about the blog schedule, I know I haven't finished blogging about our road trip, and I will be getting back to that next week. I still want to tell you about our last few days in Hilton Head, our time with Amy and Sherry, and a short detour we took into Washington, DC. The crazy timeline of the blog lately has actually been quite reflective of the crazy timeline of our life :) Happy Easter and Good Passover everyone! 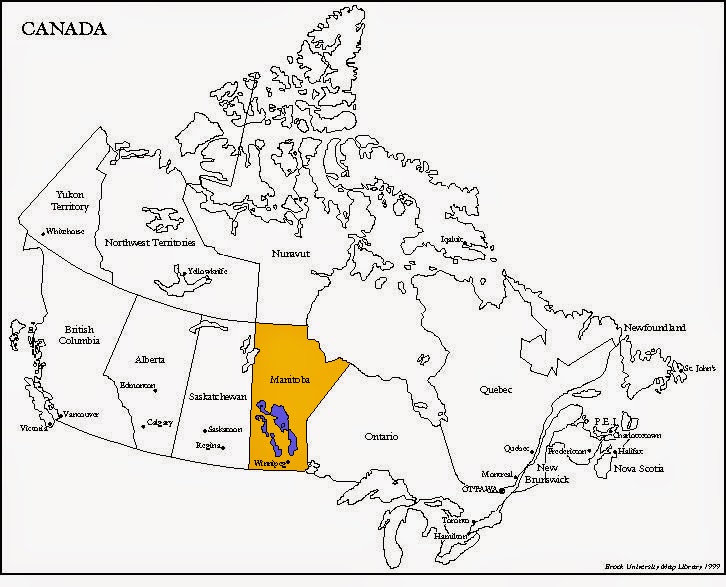 For some reason, other than Saskatchewan, I feel a huge affinity for Manitoba. I think it's because it is most similar to Saskatchewan in terms of landscape and cultural make up. Also, it is Saskatchewan's neighbour :)

Manitoba is made up of prairie, the Canadian Shield, and many lakes and rivers. It is sometimes called the "Keystone Province" because it is in the middle of Canada. Most of Manitoba's cities, including Winnipeg, its capital, are located in the southern third of the province, on the prairies.

Central Manitoba is made up of forests and bogs. Lake Winnipeg, the fifth largest freshwater lake in Canada, is located in the centre of the province and extends south to Winnipeg. There are also six major rivers which wind throughout the province. One of these, the Red River, has flooded a number of times with major floods occurring in 1950, 1997, and 2009. A floodway has been built to try and mitigate some of the flooding. Extending north, there is the Canadian Shield which features mostly rocks and trees, and in the far north is the taiga, which has fewer trees and is home to animals such as caribou and arctic fox.

Manitoba is one of the sunniest provinces in Canada. There are cold, harsh winters with a lot of snow and hot and humid summers. In summers, because of all the lakes and rivers, many mosquitoes call the province home. In fact, it has been said that the mosquito is the provincial bird! However, to make up for the mosquitoes, Churchill is home to polar bears, and in early winter tourists invade the town to watch them.

Manitoba, like most of the rest of Canada, was home to aboriginal people long before Europeans came to North America. In 1610, Henry Hudson sailed into the bay which would later be named after him, near Churchill, looking for the Northwest Passage. From the 1600s until the late 1800s the fur trade drove most of the economy in this area. In 1670, King Charles II of England granted the territory of all of Manitoba, most of Saskatchewan, and parts of Alberta, Ontario, and Quebec to the Hudson's Bay Company (HBC), a new trading company. This territory was known as Rupert's Land. The Bay, where Dave and I registered for our wedding is an offshoot of the original HBC company. The HBC traded with the Aboriginal peoples and had a monopoly on the fur trade.

However, in 1794 a rival company, the North West Company, sent canoe brigades, known as voyageurs, on the rivers to trade with the aboriginal peoples. The two trading companies fought for control of the fur trade.

From the fur trade, the Metis peoples were born. Europeans would have children with Aboriginal people and the babies were known as "Metis." They lived in a culture which spoke French and their Aboriginal language. They became well known as bison hunters and fur traders. Eventually conflict between the Metis and the fur traders forced the uniting of the two companies under the Hudson's Bay Company name.

After Confederation, the new country of Canada negotiated with the HBC for Rupert's Land. It was transferred in 1869 and called The Northwest Territories. As the Metis weren't consulted about this transfer, they formed a provisional government led by Louis Riel, and drew up a list of rights. In 1870, Manitoba became a province and many of these rights were made law.

After this many Metis moved to Saskatchewan (still considered part of the Northwest Territories), and Riel led another rebellion from there, the Northwest Resistance. (You may remember some of this history from my Saskatchewan post.) Eventually Riel was executed for treason and he is still a figure of controversy. In Manitoba, he is considered a founder of the province. 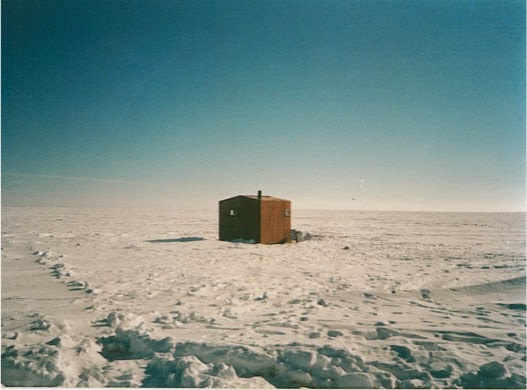 I wish I had more (and better) pictures of Manitoba. However, I thought I would share this one from when I visited a friend in February of 2000. We went ice fishing and this was the shack we fished from, pictured on Lake Winnipeg. I also had the unique experience this visit of driving on ice roads -- roads which are made once the lakes freeze over. These roads cut of miles of driving by heading straight across the water.

Mantioba is home to many different peoples and cultures. About 27,000 people of Icelandic descent live in Manitoba and an Icelandic festival has been held in Gimli, just north of Winnipeg, since 1932. Many Mennonites live in southern Manitoba, and the Ukranian influence can be felt throughout. Many restaurants even have perogies on their menus!

Manitobans live their lives around community and many of the main events feature just that. One which is unique to Manitoba is the social where guests buy a ticket to attend and then also buy tickets for food, drinks, and games. These socials either raise money for a good cause or for a young couple about to get married. There are also harvest suppers in many southern Manitoba communities. These suppers raise money for community projects.

Manitobans make their living from the land in many different ways -- farming wheat and sunflowers, mining nickel, copper, gold, and zinc, and harnessing the power of the many rivers for hydroelectricity. Trees are also cut and processed to make paper, furniture, and lumber. An unusual industry in Manitoba is the fly-in fishing industry. You can be flown in to a fishing lodge just to enjoy catching fish. The largest inland fishing industry in Canada is on Lake Winnipeg.

Manitoba's biggest industry though is manufacturing. Everything from rockets motors to windows and processed food is made in Manitoba. One of the biggest manufacturers of transit buses in North America is based in Manitoba.

The International Peace Garden is a 947 hectare garden which includes a floral clock, fountains, and a peace chapel. It spans the American-Canadian border between Manitoba and North Dakota. It commemorates veterans of World Wars I and II as well as victims of 9/11.

Red River Cereal is a porridge made of wheat, rye, and flax and originated in St Boniface, Manitoba in 1924. My parents made this for breakfast fairly often when I was a kid, but I did not like it. It's very grainy. NOTE FROM DAVE: I also had Red River cereal for breakfast as a kid, and didn't realize until I read this post where the name came from. For the record, I really liked it but, since I'm much more of a breakfast eater than Natasha is, this doesn't come as a huge surprise!

Manitoba was the first province to grant women the right to vote in 1916.

A branch of the Royal Canadian Mint opened in Winnipeg in 1976. It produces coins for over 100 countries and visitors to The Mint can watch the coins being made.