The Weekend Wha-- "Watch Out For That Axe!" 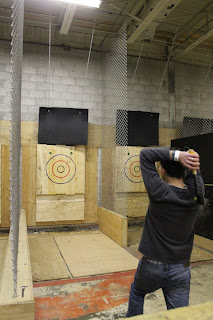 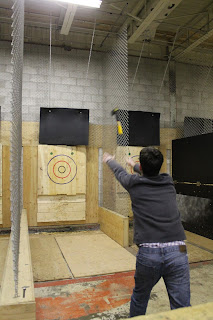 A few weeks ago Dave come home and asked, "Want to go axe throwing for a date night?" Since I'm always up for something new, I said, "sure," and that is how we found ourselves at Batlgrounds on Friday night, throwing axes with Dave's co-workers. 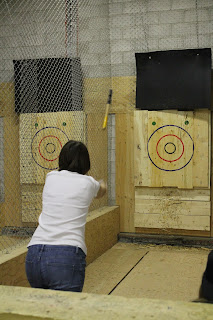 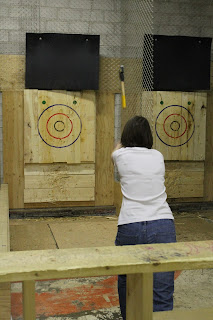 It is actually not the easiest thing in the world to do and, at first, I was quite bad at it. Our two coaches set up a tournament and I told Dave my goal was "not to come in last."

The way it works is that you play against another person. You each get five throws, which makes up one game, and it's the best out of three. For the round robin part of the tournament we played all three games because the final bracket was based on points, not necessarily games won. 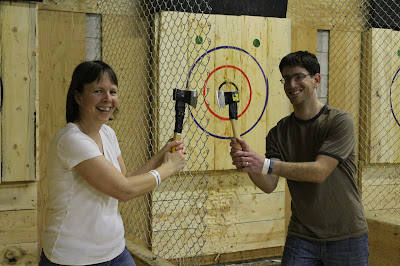 Then I had to take on Dave in a game and I actually came out victorious. Beating Dave gave me a boatload of confidence and I became an axe-throwing late bloomer. 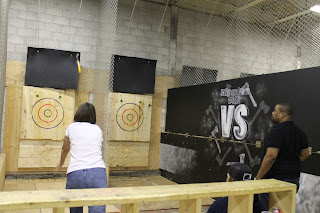 I got to the semi-finals, taking down two opponents (in games, not with the axe!), before losing to a worthy opponent. 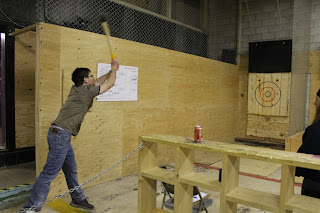 If you end up tied with an opponent at the end of three games, then you battle by throwing the big axe. Dave and I never got to that point in our games but at the end we were allowed to throw it a few times. Let's just say that was a whole different ballgame axe to throw!

Also, ever since Friday night, new groups of muscles have been making themselves known and protesting their axe throwing workout. On Sunday every time I laughed it went something like this, "Ha ha ha - ow ow ow!" as my diaphragm was very sore.

Dave and I both had a blast and would love to go again sometime. 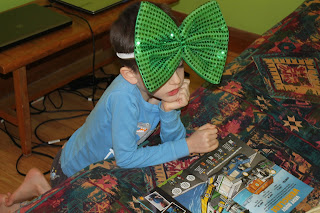 We also decided to walk to the thrift store, stopping along the way to feed some broccoli to our friends' chickens, admire some Easter trees, and catch some Irish dancing in one of our public squares. Sam walked the entire way (about 3.6 km or 2.3 miles) and Rachel walked most of the way. 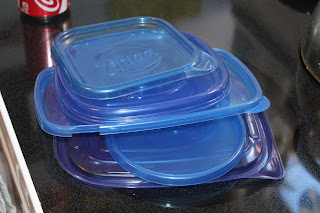 That night I got excited about throwing out Ziploc lids which didn't fit with any of our containers. It's small things which give me great joy! Ha! Sadly, when putting away leftovers later that night, I discovered I'd accidentally thrown out one too many lids and had to retrieve it from the recycling bin. Ooops. 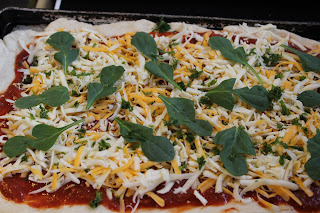 Saturday night Dave's family came over for supper for a belated St Patrick's Day/Dave's dad's birthday celebration. I made shamrock pizza (which was way too much work so I likely won't do it again, although the kids ate two pieces each of spinach pizza so maybe I will... Oh the dilemma!) and we had Sprite floats with lime gelato.

On Sunday we went to church and then to a friend's birthday party. We had a really good time, ate too much food, and got home in time to go to bed.

It was a really good weekend. Except for the part where it hurt to laugh :)
Posted by Natasha at 07:22