Back To The Time Of The Dinosaurs

Almost two weeks ago now, I got to go along on one of Sam's school field trips. We went to the Earth Sciences Museum at the University of Waterloo. It was such a cool visit, and I got so caught up, that I'm glad it was an easy trip to supervise! 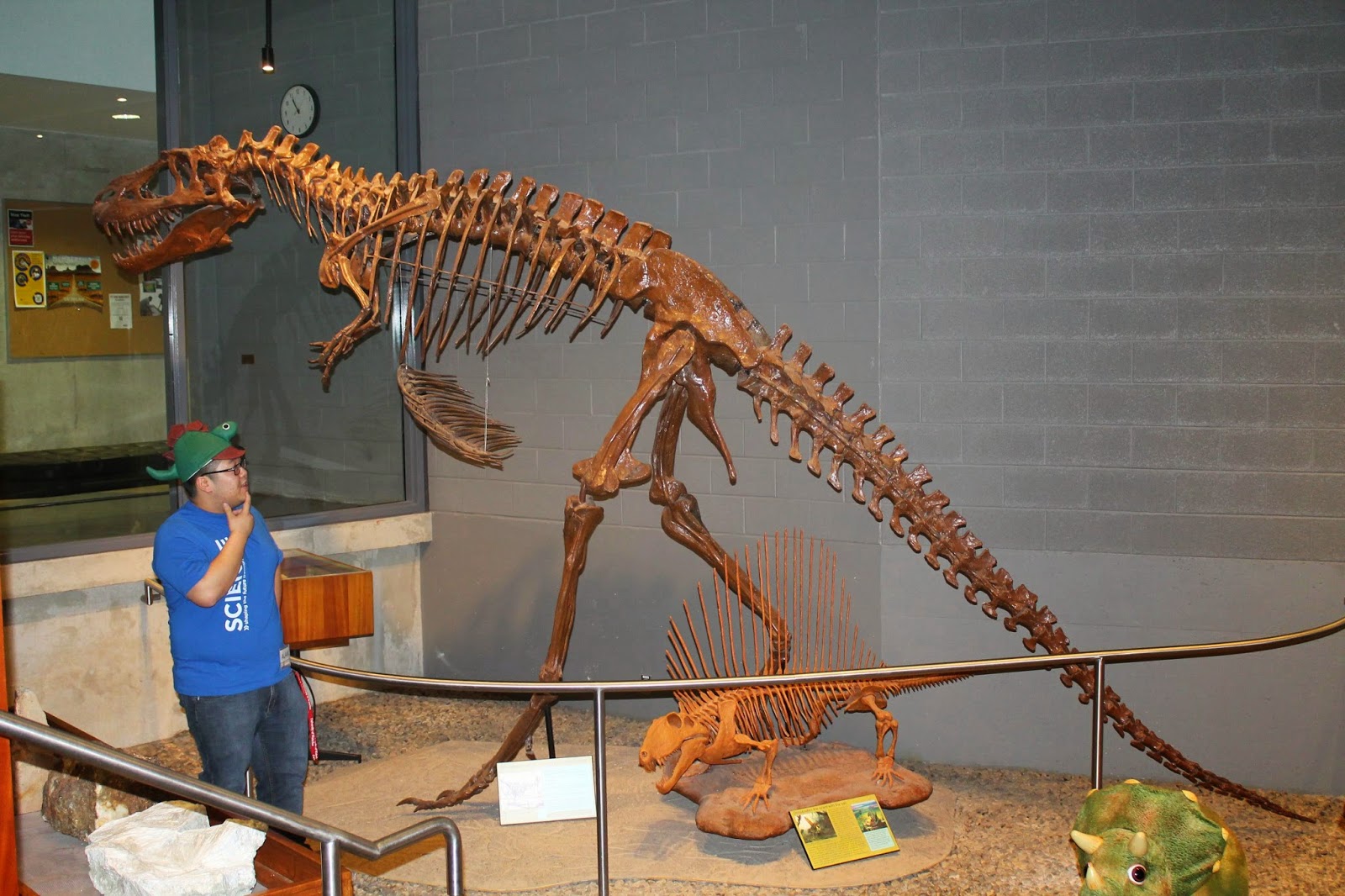 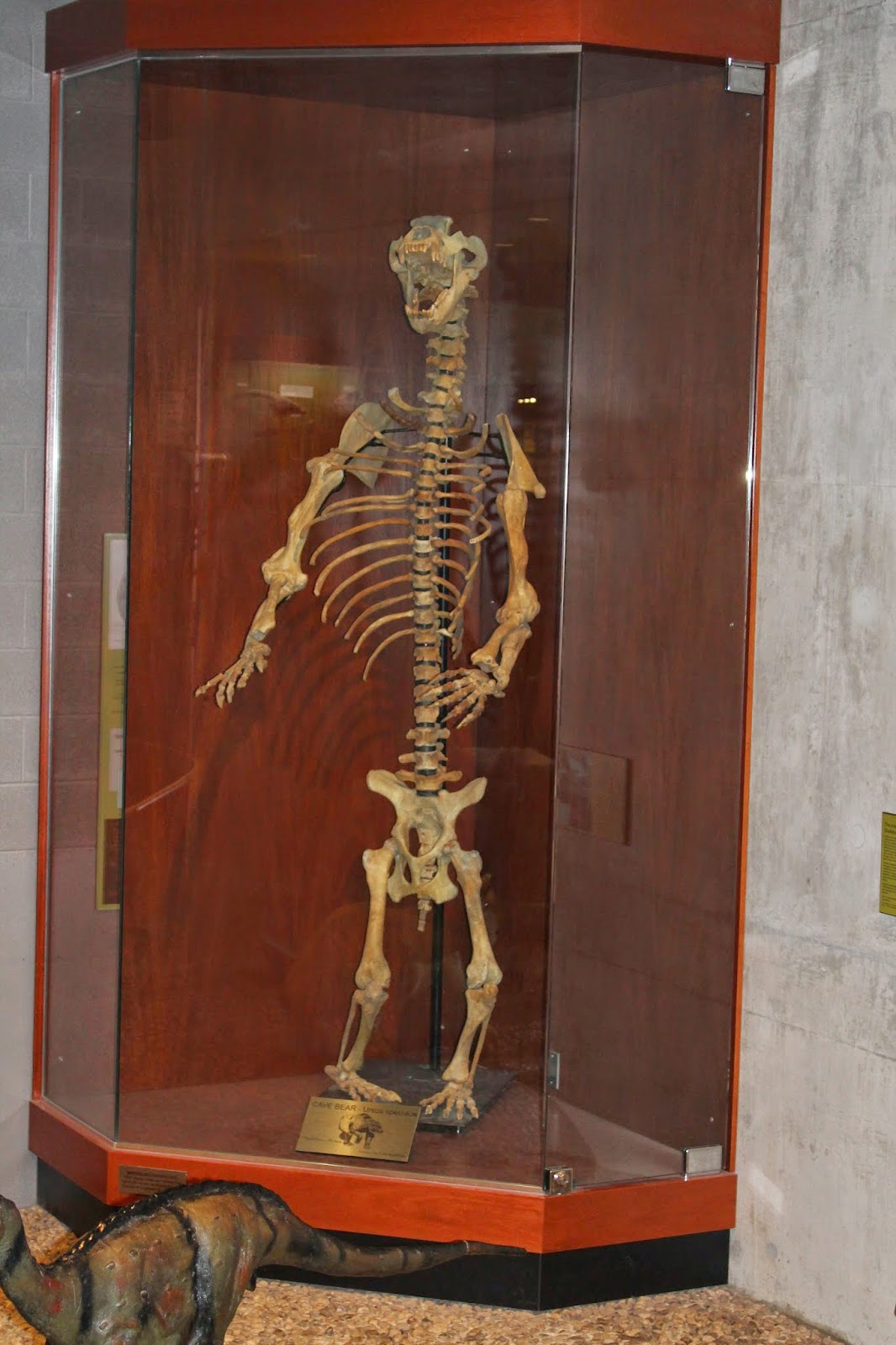 Will and  Alan were the two guides, and Alan, especially, did a great job of engaging the kids, including all kinds of learners. He had a lot to show and tell about each dinosaur he talked about but he also had an action for each one as well. I was super impressed. Here Alan is telling us about Albertosaurus. The picture next to it is the skeleton of a cave bear, which I thought existed only in books. 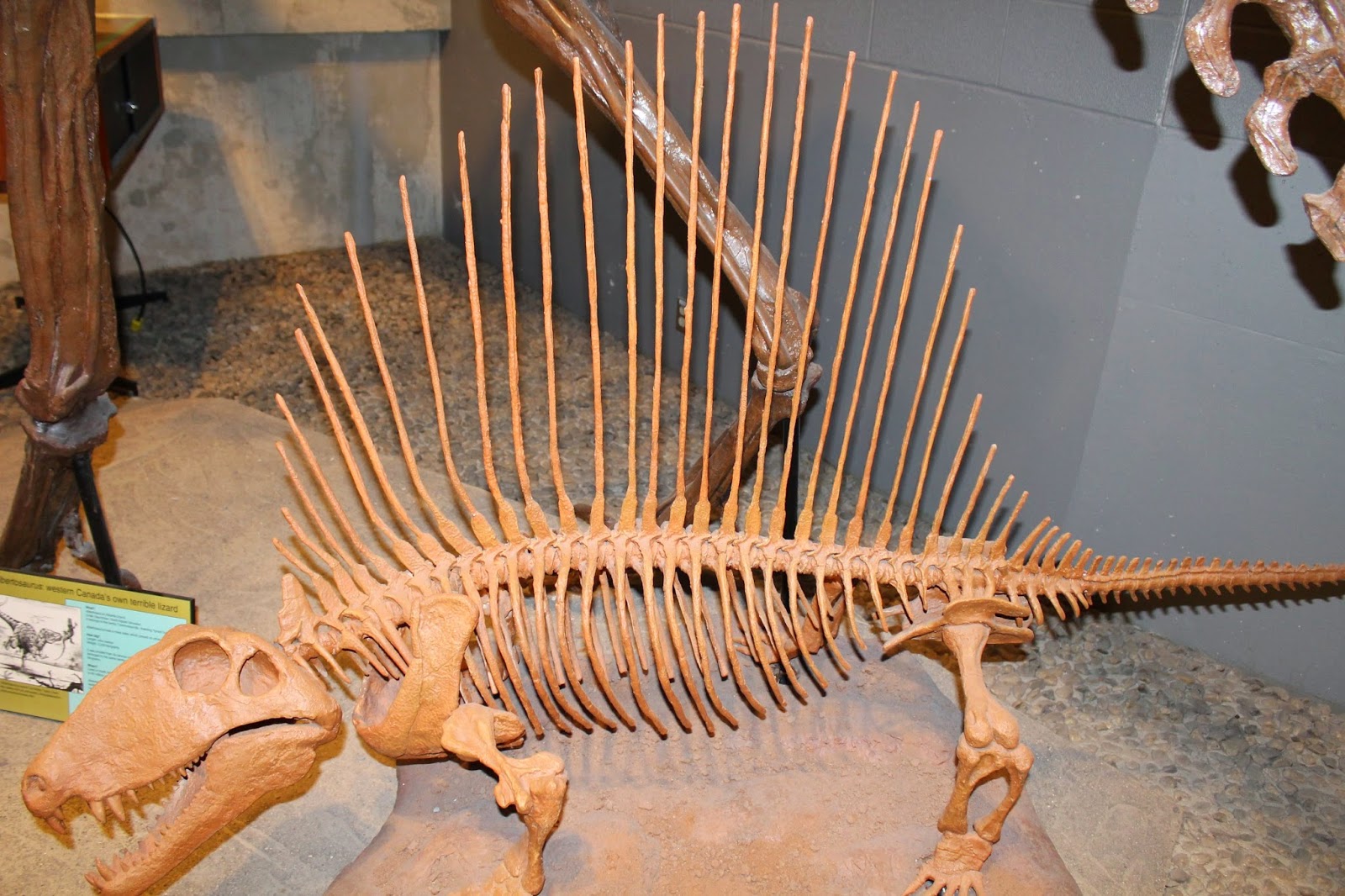 This is a dimetrodon and the spines were covered in skin creating a sail. This "sail" was like a solar panel and would absorb heat from the sun so the dimetrodon could warm itself. I thought that was really interesting! 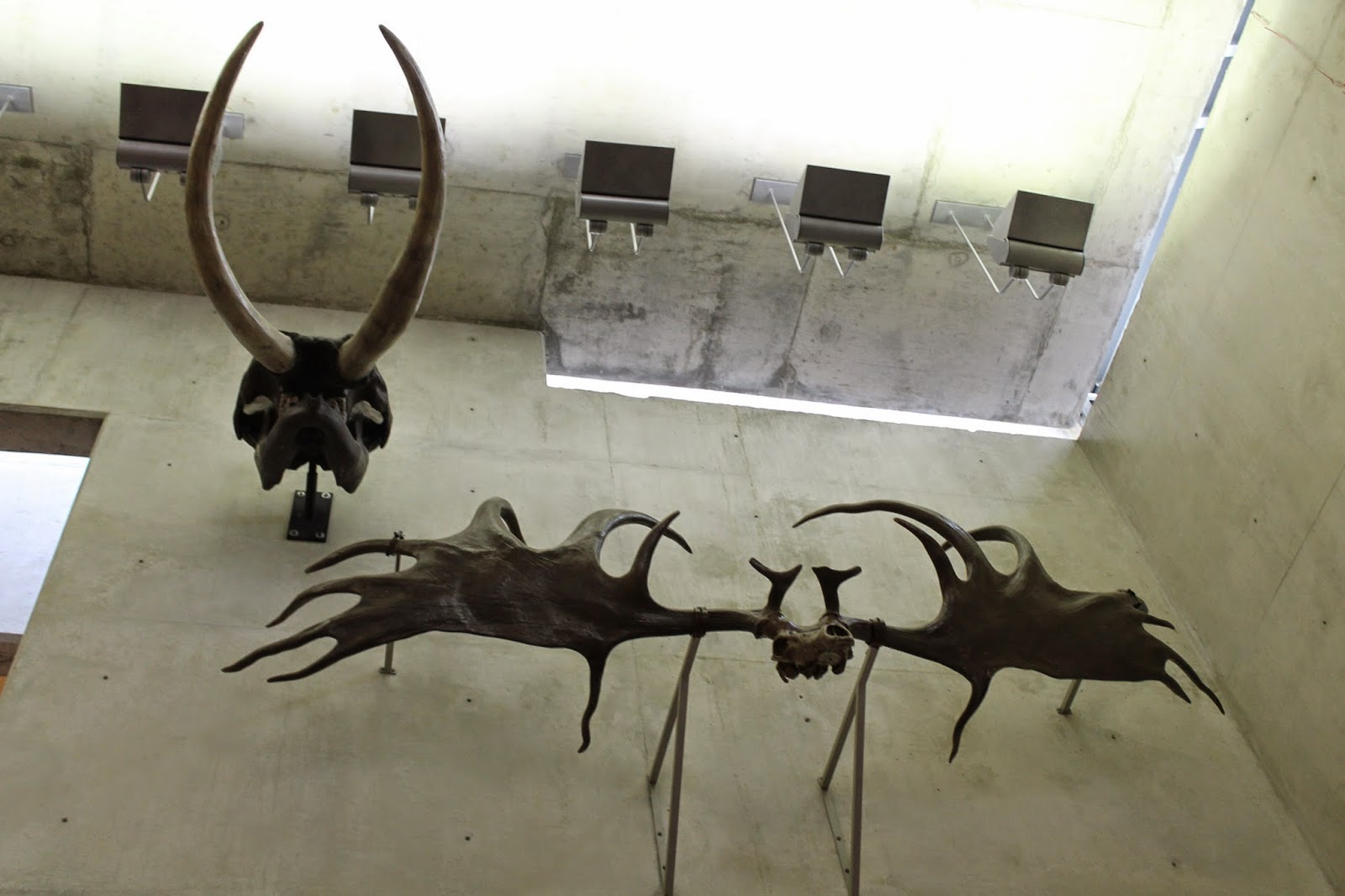 After we spent some time learning about different dinosaurs in one room, we went on a brief tour. We saw a bunch of cool fossils and dinosaur skeletons. The big set of antlers above was from an Irish Elk. 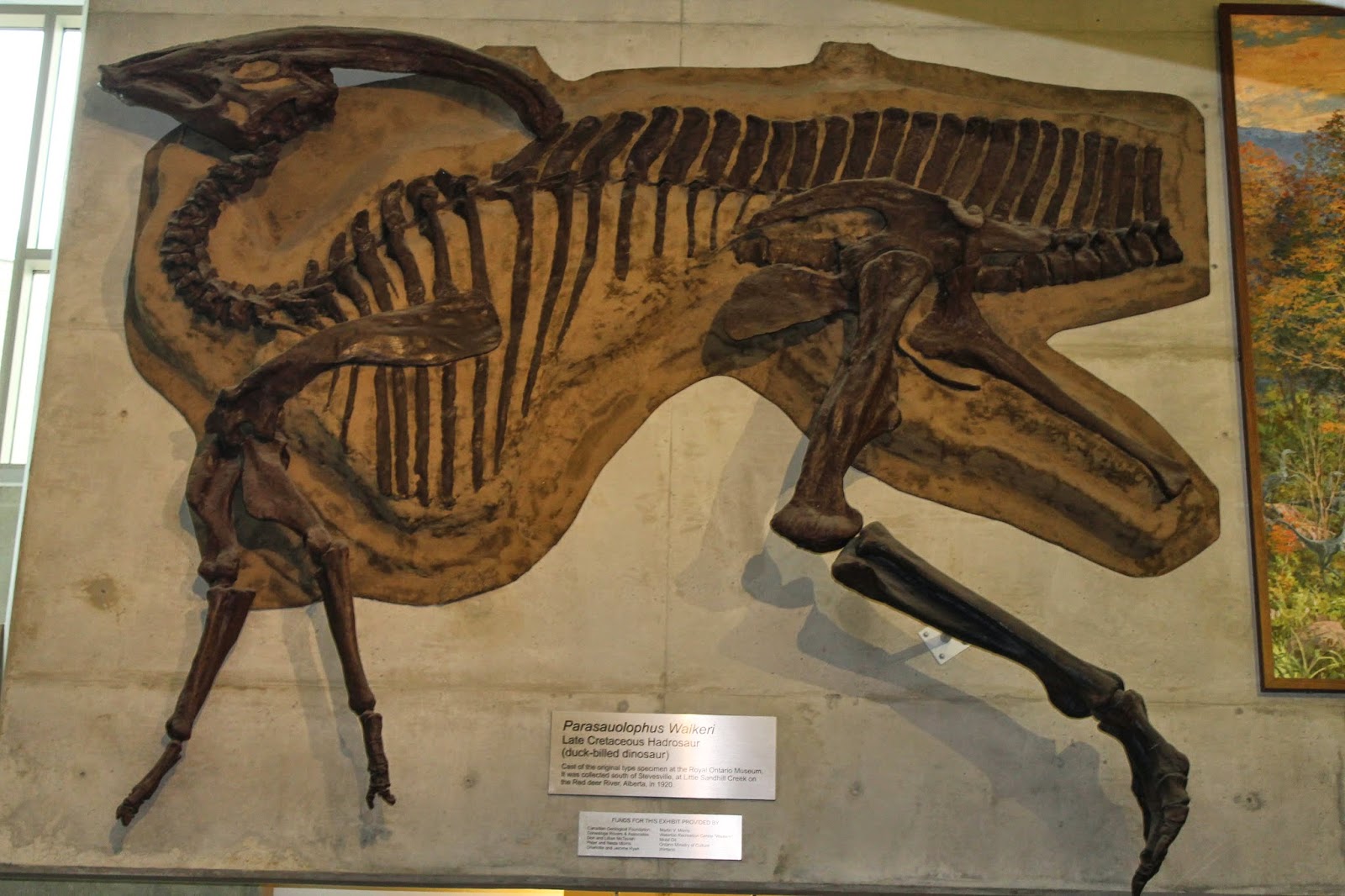 This is the skeleton of a Parasauolophus. Alan worked hard to help us all be able to say that name! We theorized that the bottom part of one leg was missing because it got eaten off! 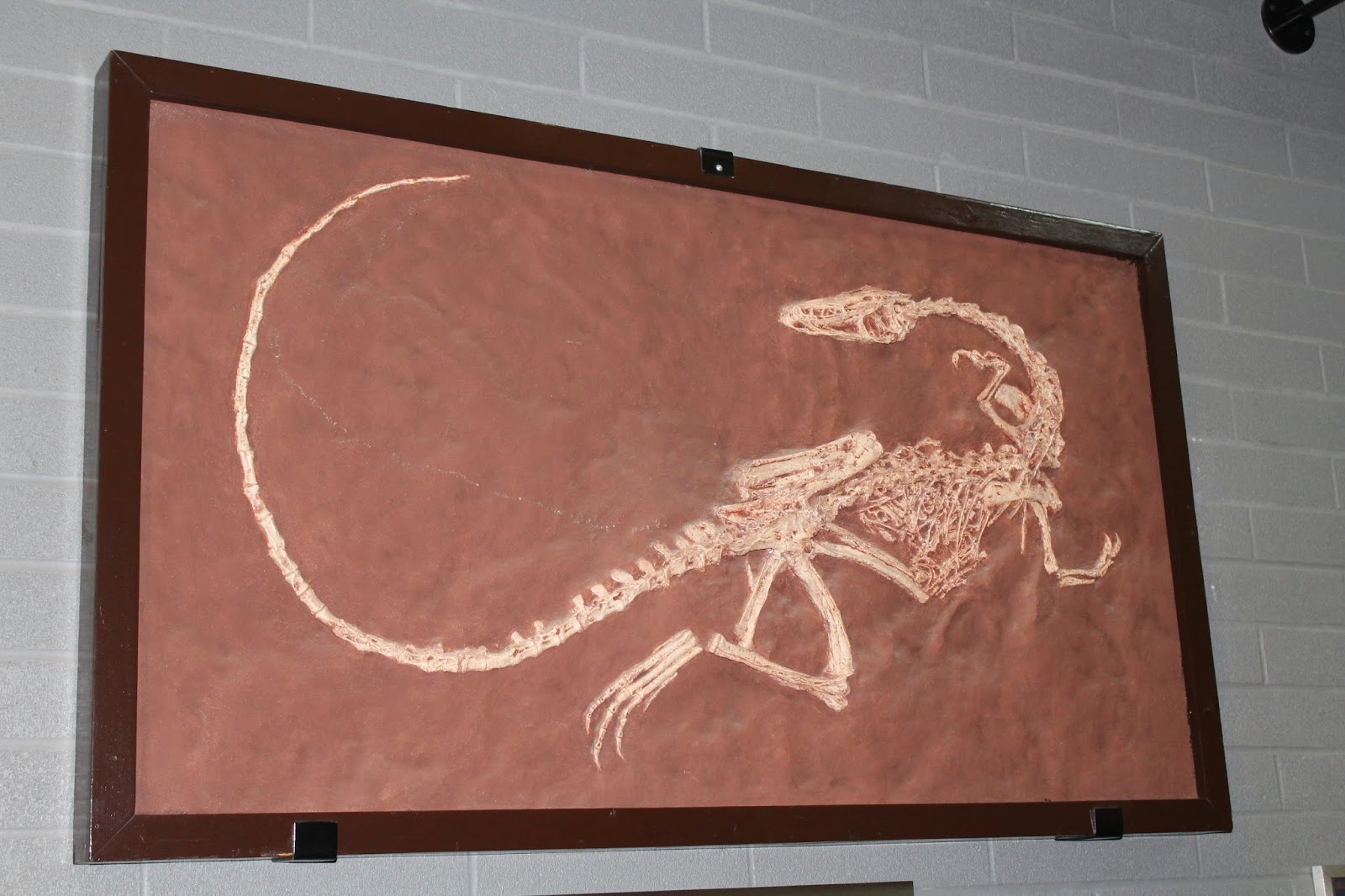 This might have been the dinosaur that ate its young. One of the skeletons we saw had little skeletons inside and it was rather creepy. At least I thought it was, the kids may not have understood the implications of that. 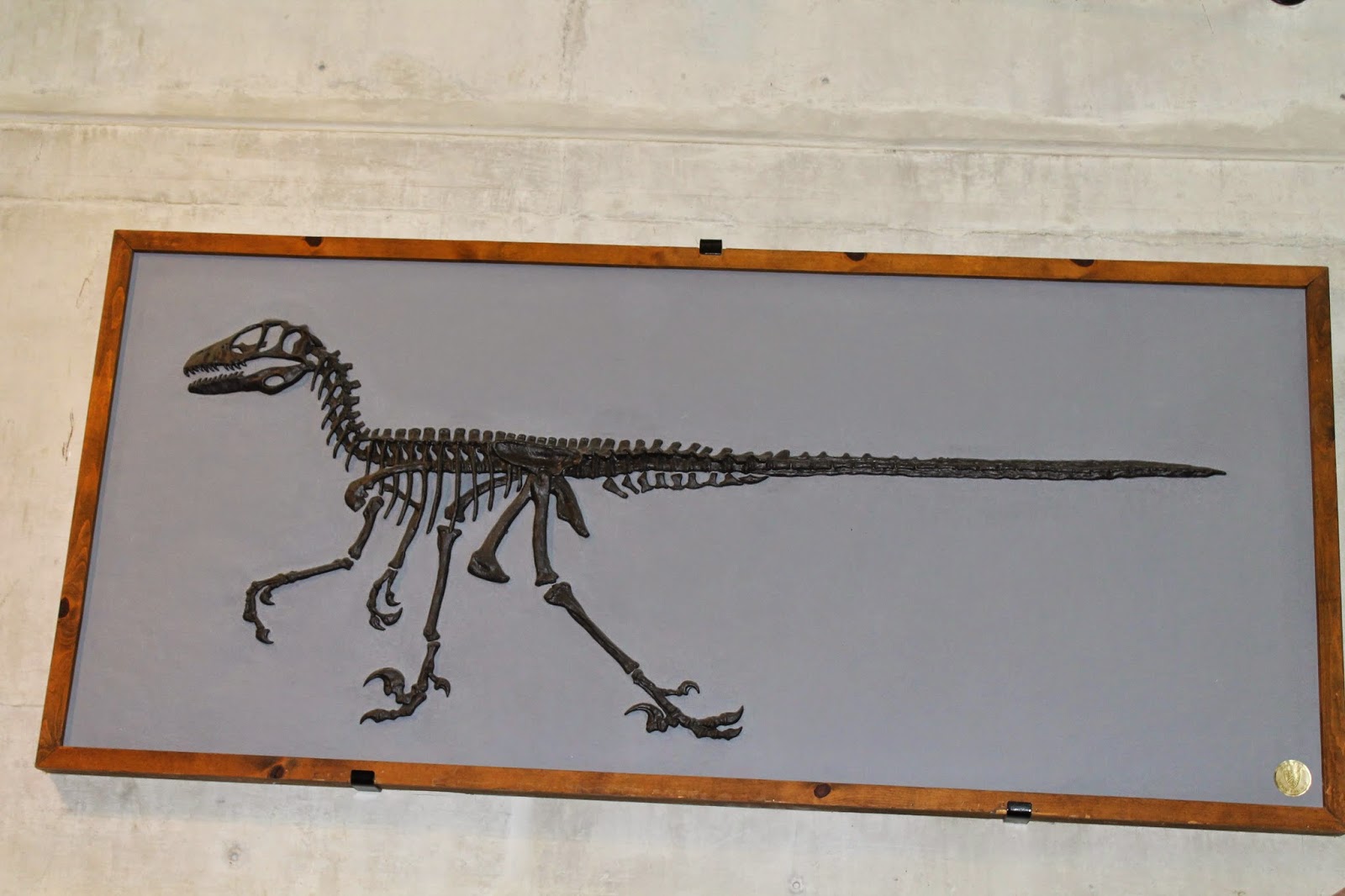 I think this dinosaur was a coelophysis. Its long tail helped it keep its balance when running. 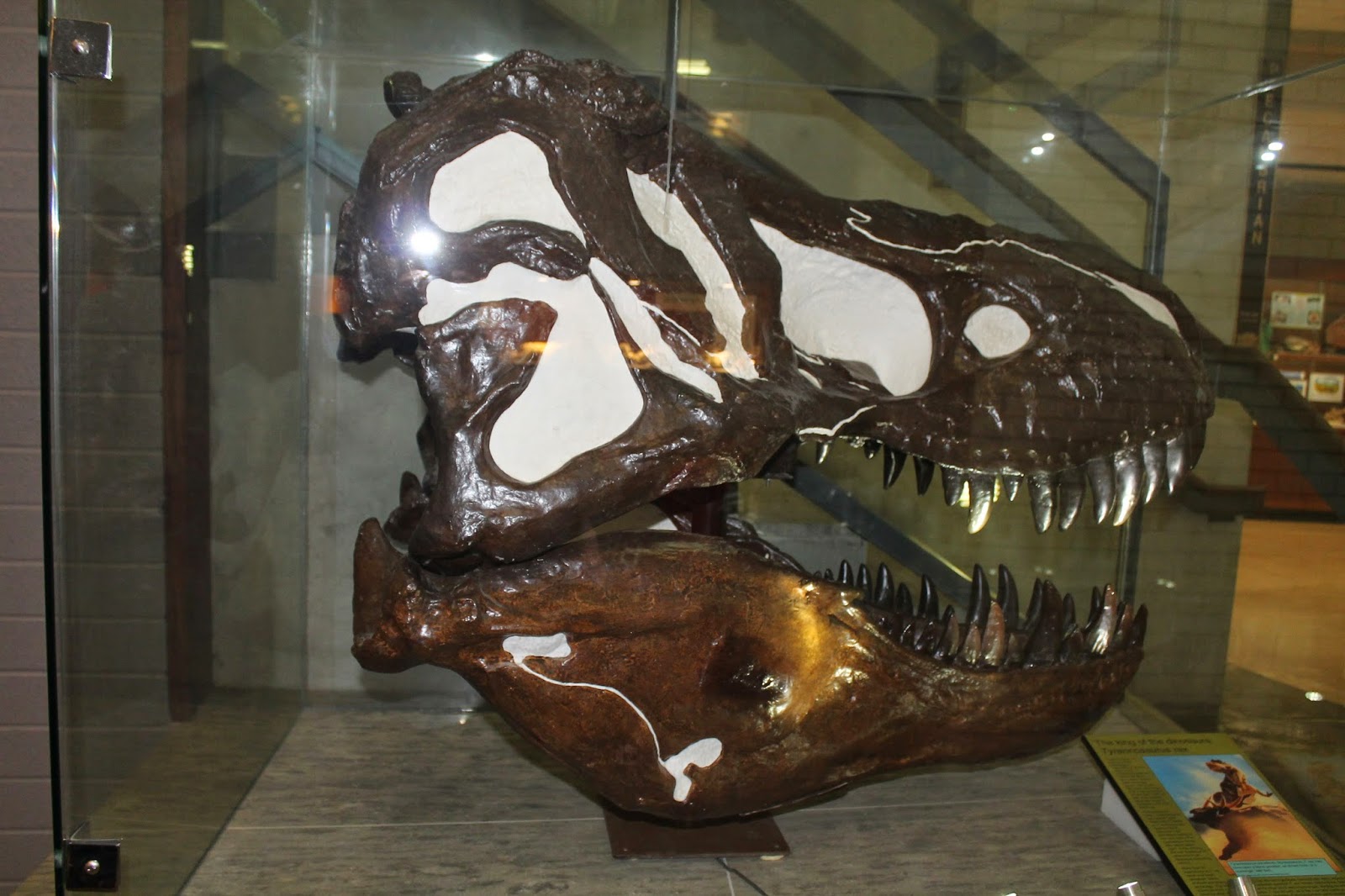 This is the head of a T. Rex. All the kids knew this one! 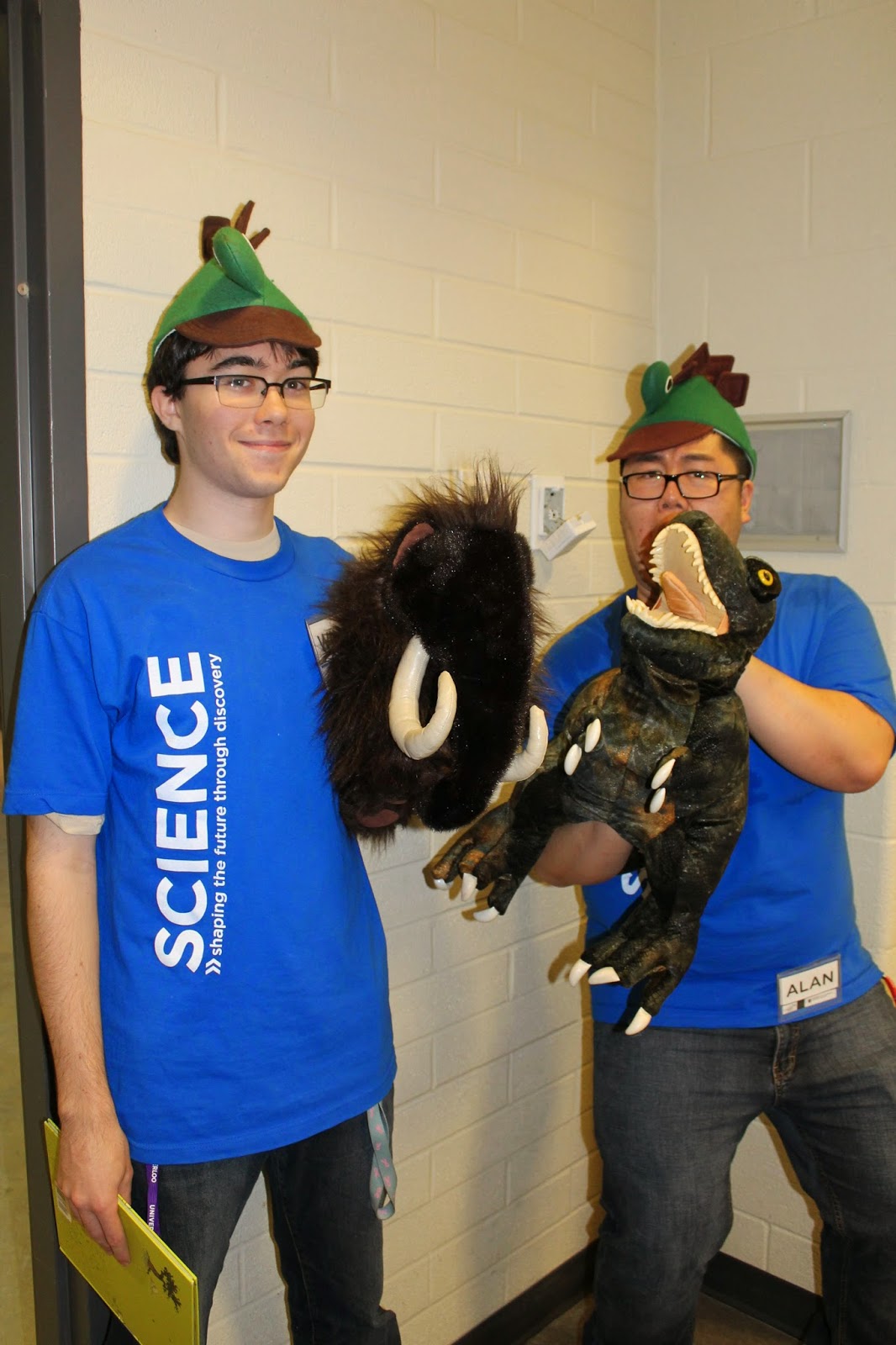 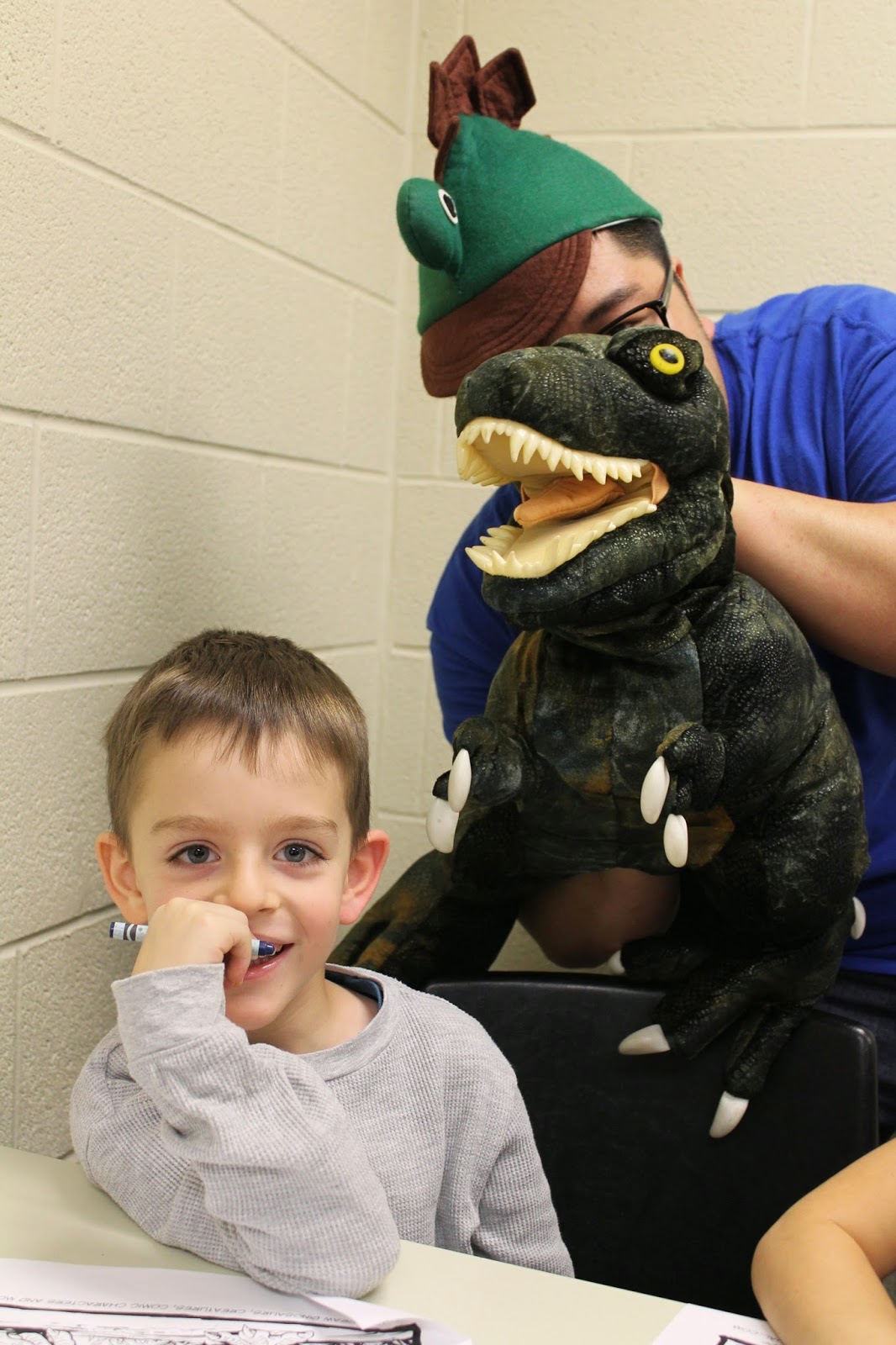 After the tour, the kids each got to colour a dinosaur colouring page. Freddie, the T. Rex came around and visited all the kids! 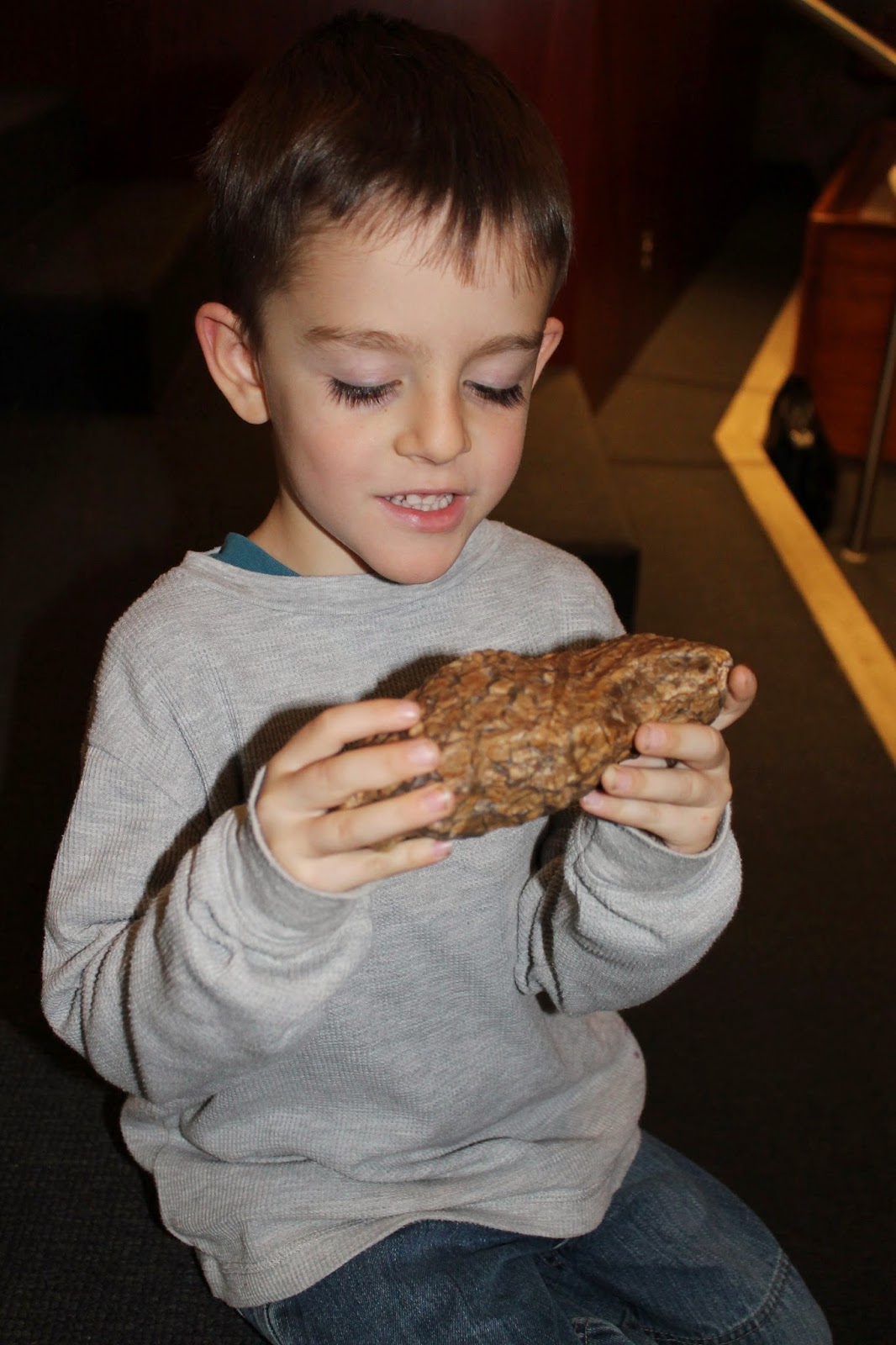 Then we got to go back to our original room and the kids all got to touch and examine different kinds of fossils. Sam is checking out some really old dinosaur poop here. Awesome. 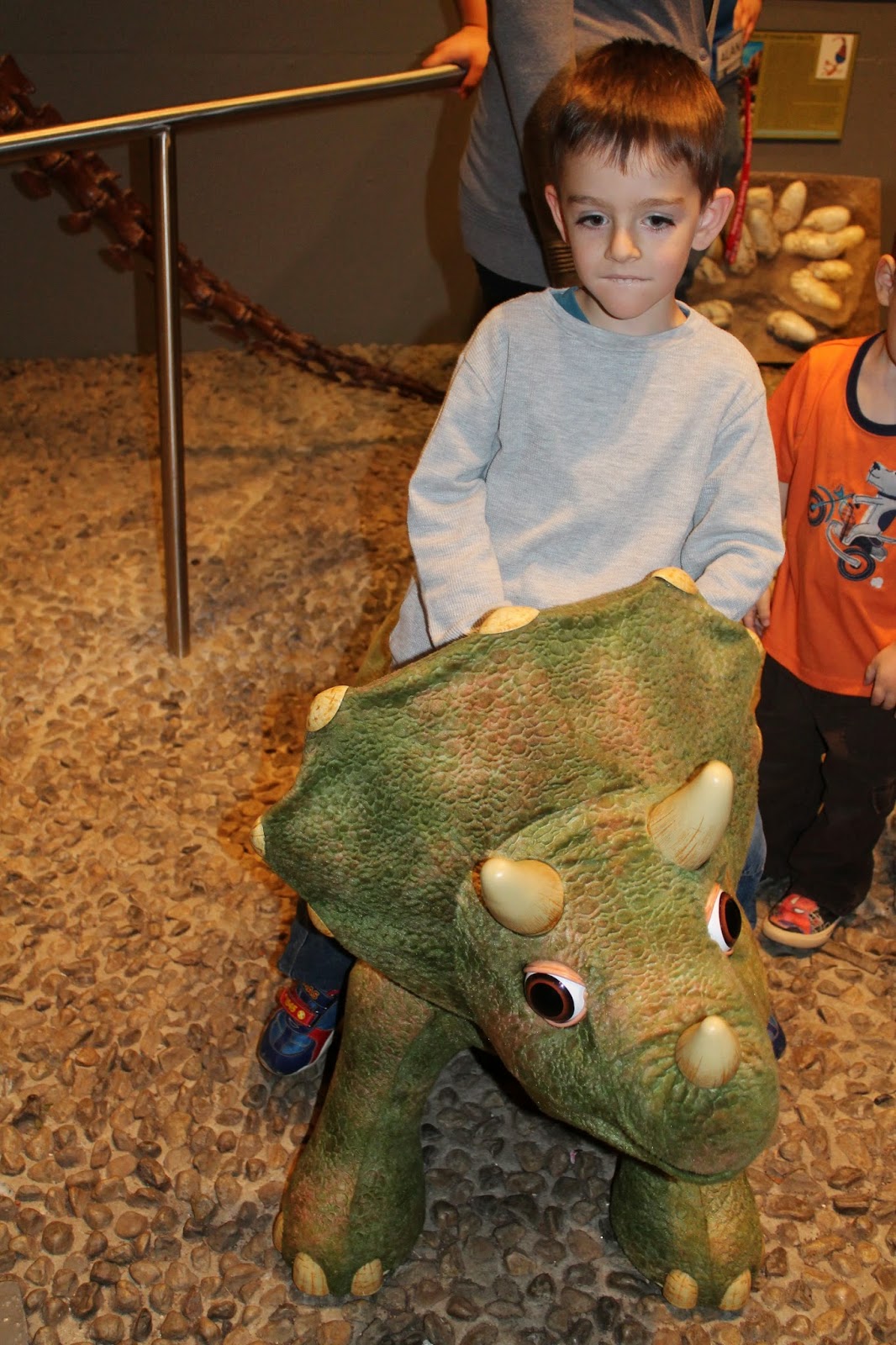 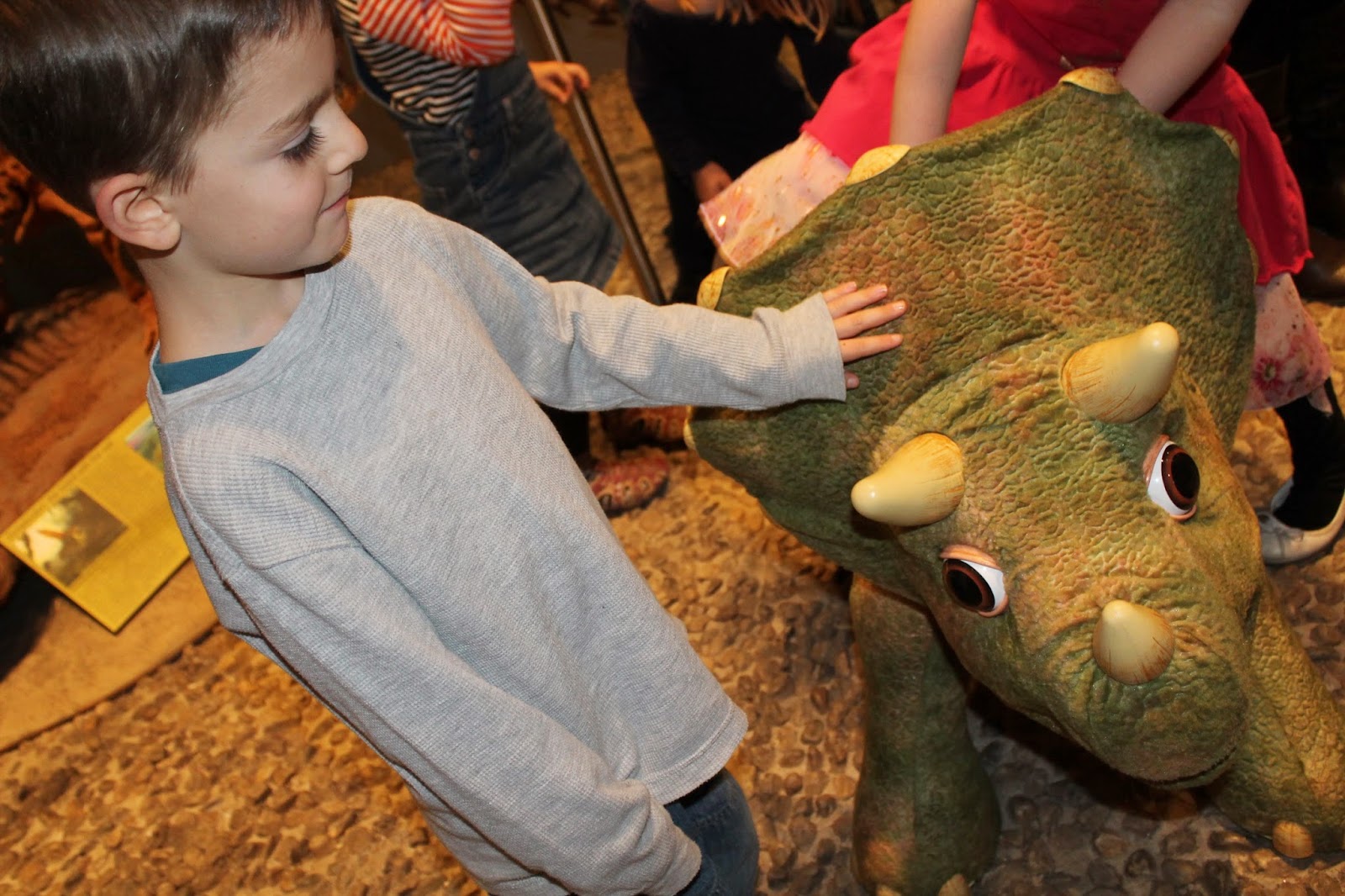 Then each kid got a ride on Trish The Triceratops. They also enjoyed petting her. Trish moved her head and the kids all thought this was the best thing ever. 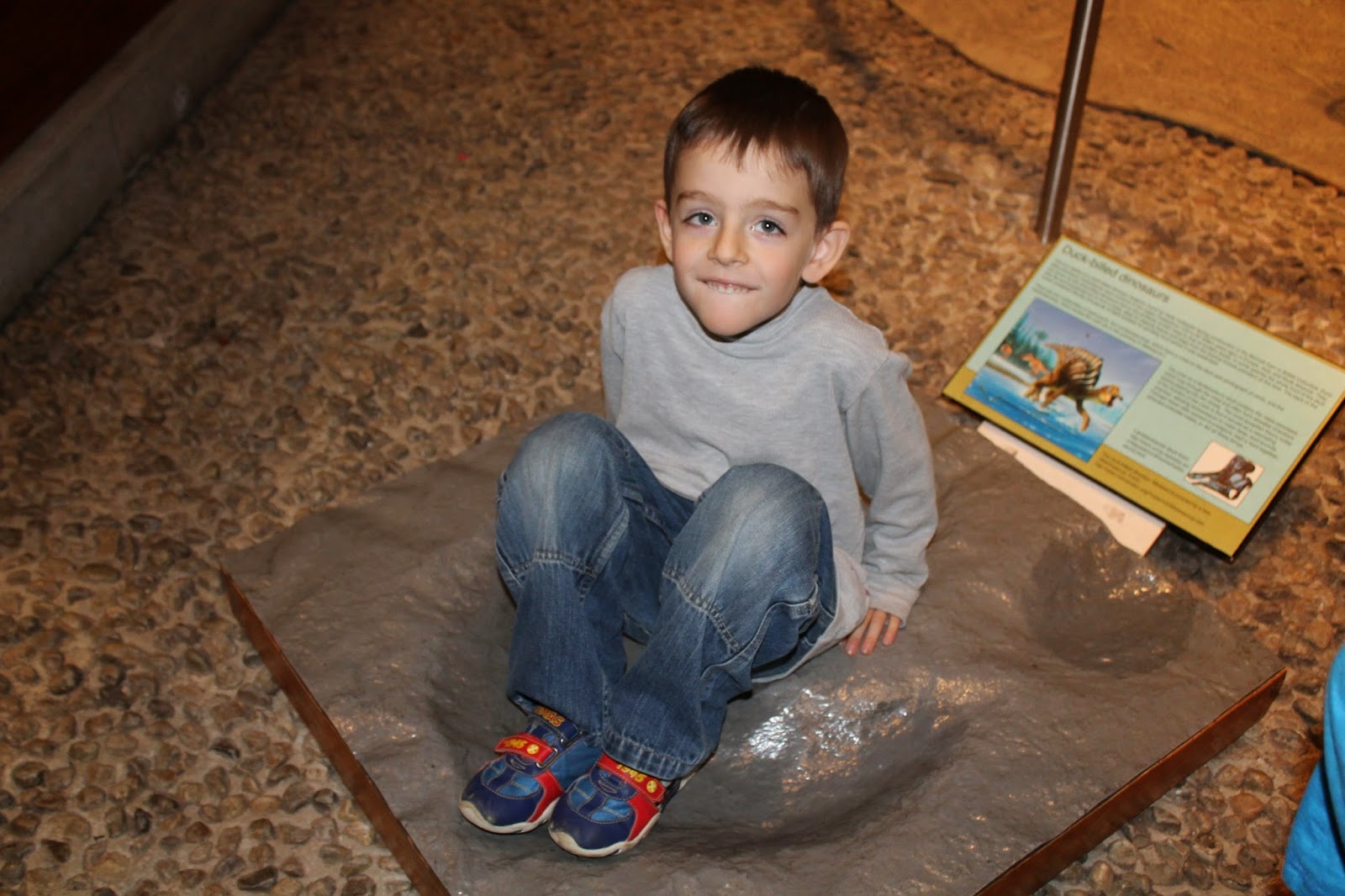 Finally, Sam got to sit in the foot print of a duck-billed dinosaur. Those things were huge!

I really enjoyed being able to go on this field trip. It was a great experience and I think all the kids really enjoyed it. I'm already looking forward to Sam's next field trip and I hope I'll be able to work it out so I can go along!
Posted by Natasha at 08:24