You may have noticed that, although this is technically "our" blog, about 99.53% of the posts are actually written by Natasha. Every now and then, I (Dave) jump in with a random post, just to mix things up a little.

Well, this post is extra-random :) It started with Natasha asking me to take a picture of her and Sam as they worked on peeling, seeding, and eating a pomegranate after dinner, and snowballed into me taking a whole bunch of pictures around the house and writing about it on the blog.

So, to answer the question I'm sure you're all asking: no, there is no particular point to this "autumnal photographic essay", other than I thought the title sounded pretentious and kind of hilarious (or, as Rachel is saying these days, "Cilarous!"). Any resemblance to a coherent plot or deeper meaning is entirely accidental. 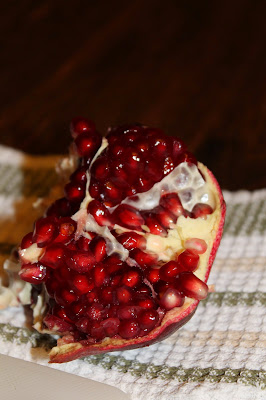 According to Jewish tradition, there are 613 seeds in a pomegranate, to match the number of mitzvot (good deeds) in the Bible. Here you can see about half of them :) 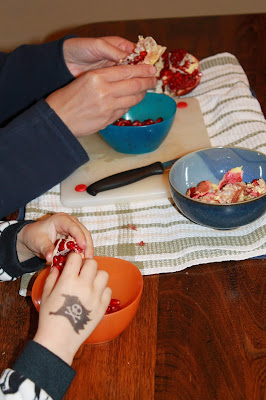 Sam and Natasha hard at work removing seeds. I love how you can see Sam's pirate tattoo from a birthday party this past weekend. 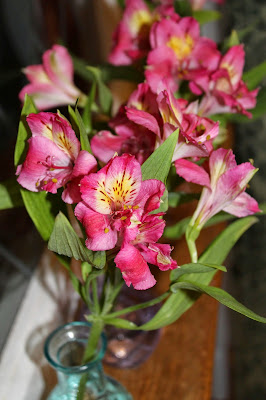 Close-up of some alstroemeria that I bought Natasha last week, on the evening that she donated blood (well, tried to, anyway). Also, Rachel insisted that some of the flowers were "hers," hence their being divided up into several small vases. 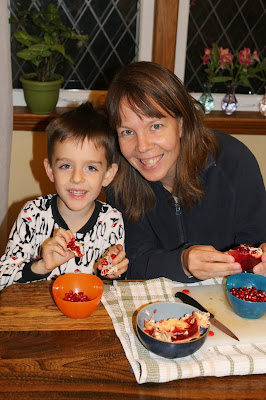 The proud pomegranate pair, posing with the products of their post-dinner pastime. 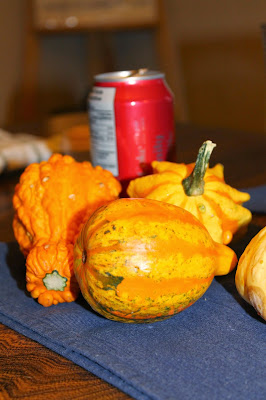 Natasha has had several small gourds posing as a centrepiece on our dining room table for the past few weeks. I thought they looked especially autumnal (there, see, this essay is autumnal!) with a can of Coke in the background. 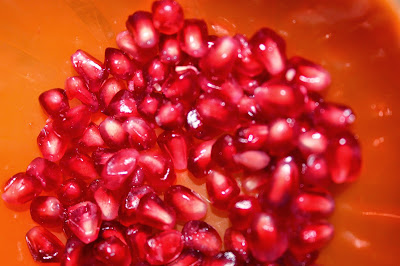 A close-up of the pomegranate seeds in a plastic bowl. I like the way the bright red seeds reflected off the inside of the bowl. 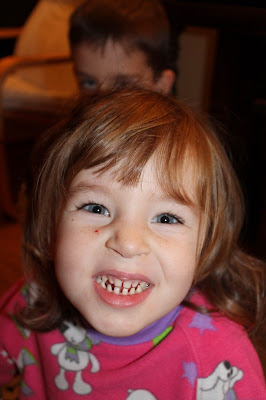 This was my partner in crime for the photography part of the essay... By which I mean "The person who kept wanting to be in all the pictures/grabbing the camera to take her own pictures." At least she was cheerful about the whole thing! 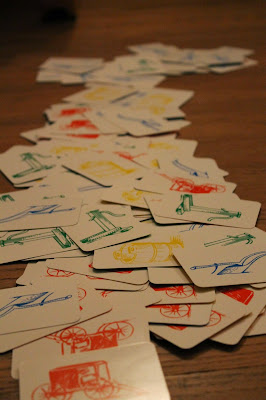 At one point, I asked Rachel to sort all the Dutch Blitz cards that were strewn across the living room floor. I showed her what I meant, and after watching her for a little while, was pretty sure that she had the hang of it. I came back five minutes later to this art installation, which I call "Somewhere, over the rainbow... my inner OCD self is cringing". 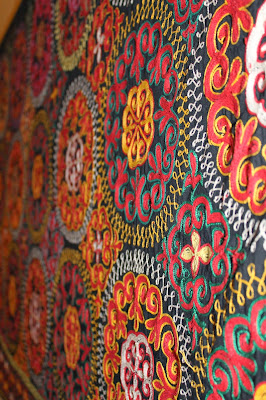 This is a close-up of the Mongolian blanket that is hanging in our dining room (why yes, "macro" is my favourite setting on our camera... how did you know? :) I love the mix of colours and designs, and am really happy that my in-laws dug it out of a box in the basement and helped hang it this past spring. 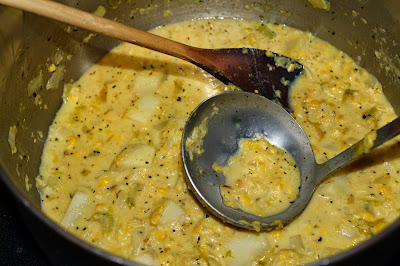 Finally, here is a shot of the corn chowder we had for supper. Between the ladle and the spoon, I feel this picture conveys a certain sense of "boy, did we devour that chowder... one serving utensil was insufficient for our massive appetites!" Then again, the left-over chowder shows that, in reality, our appetites were not that massive, after all.

And so, ending with that enigmatic study in contrasts, I will return you to your regular blog reading.
Posted by Dave at 08:35