If Only We Were Irish! And Healthy!

I know, I know, once again we're late to the party, but I've been fighting some horrible bug for the past week. It's like a cold on steroids and every day I discover some new symptom. It's awesome. Yesterday Dave and I went to the walk in clinic (whoo hoo mid-morning date???), and then we both got prescribed antibiotics. I got one more than he did so I guess I'm sicker?! Yay? Anyways...

I wrote last year about how much I love St Patrick's Day and I don't even know why. I think there's a little part of me that's Irish. So I am one of those annoying people who actually does have a St Patrick's Day Pinterest board. This year I added a few fun things into the mix. I didn't even feel all that great yesterday afternoon but I was mad that we had to keep putting our festivities off so I pushed myself through. I actually had an okay time getting everything ready.

First, I baked some Irish soda bread. I used this recipe and it turned out okay but it was a little sweet for my liking. Rachel LOVED it though. 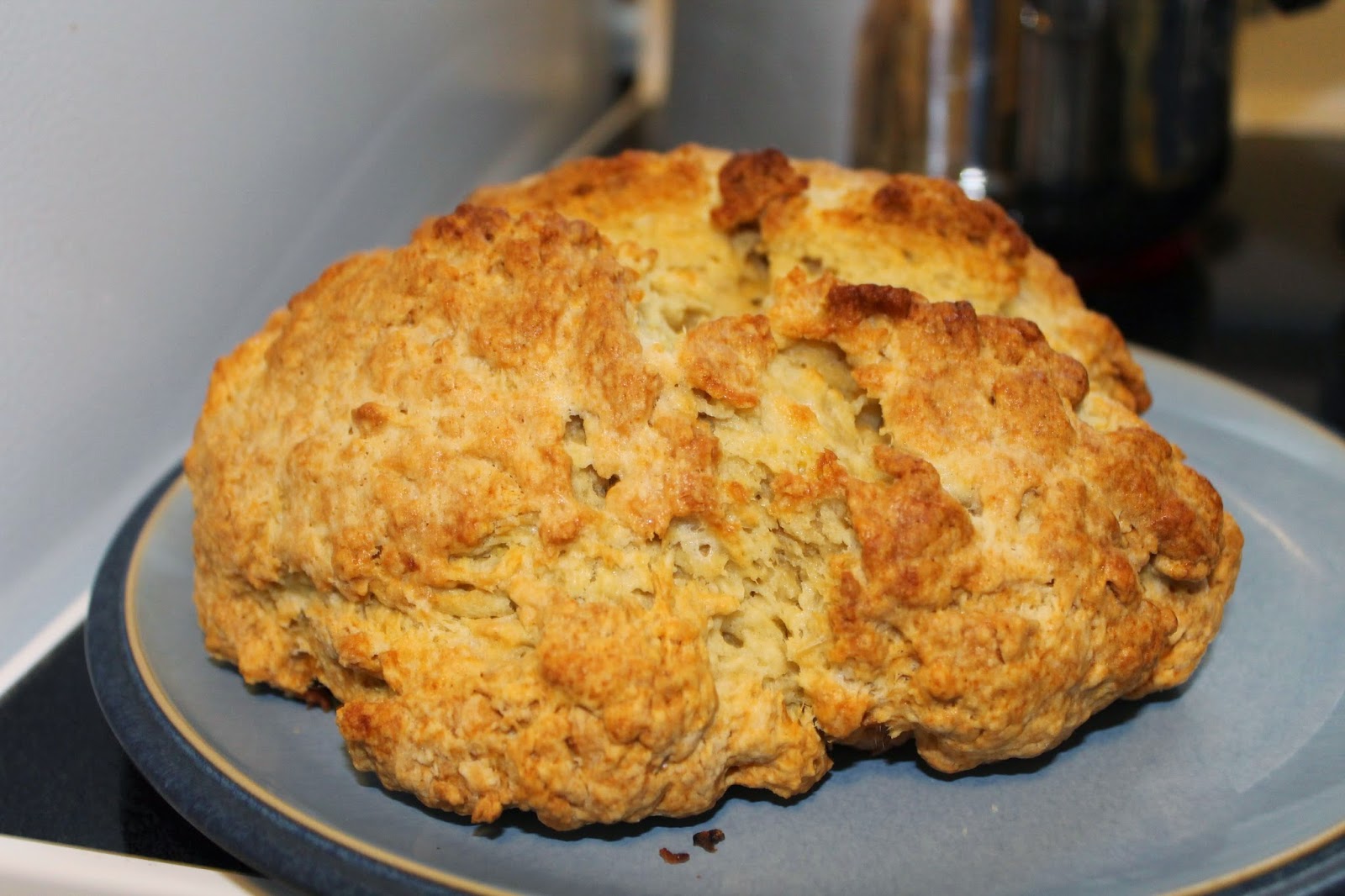 Then I made our dessert and prepared the Beef and Guinness Stew from last year with champ potatoes for dinner. Oh my yumminess! This is one of my favourite meals. 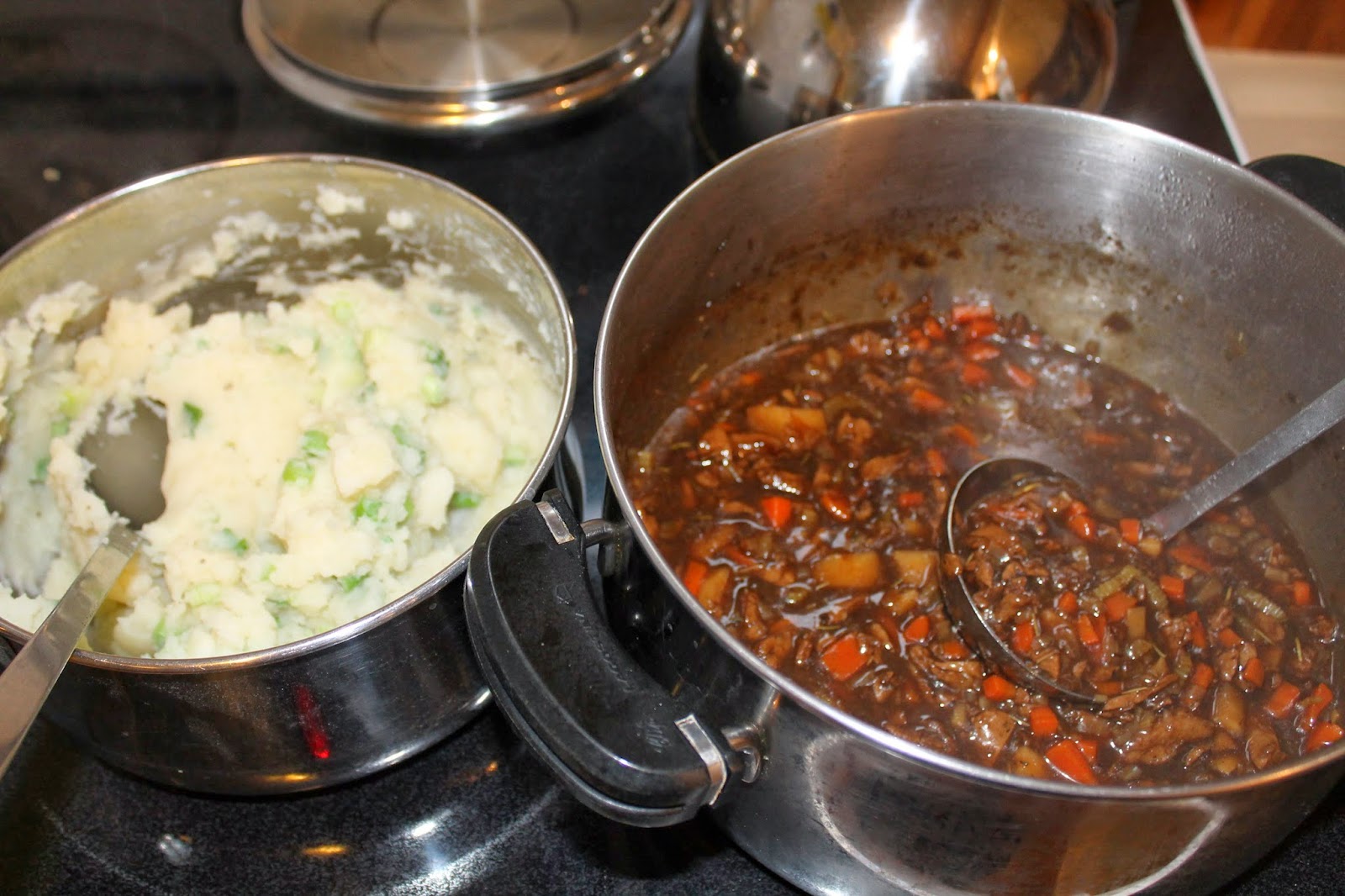 While the stew was simmering, I set the dining room table. Dave declared he had never seen such a green table! Obviously he doesn't remember last year's table :) 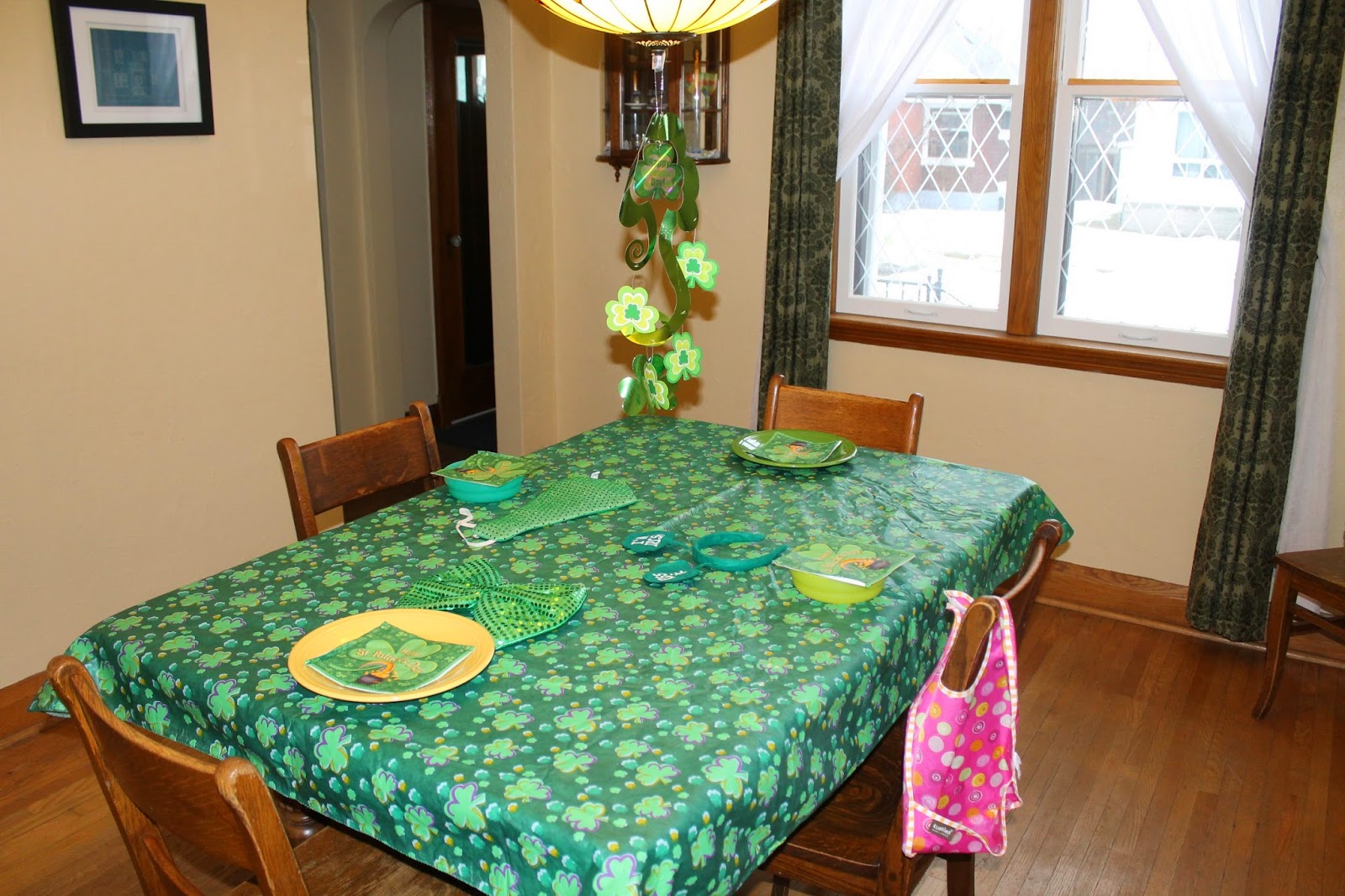 I thought making some Leprechaun Floats with lime sherbert and Sprite would be pretty easy. Sadly, our lime sherbert turned out to be white instead of green but the floats were really good. Next year I will save myself a lot of trouble and make these for dessert instead. Sam and Rachel downed them in about two minutes and then didn't really want any of the actual supper. (And you can see all our medications in the background.) 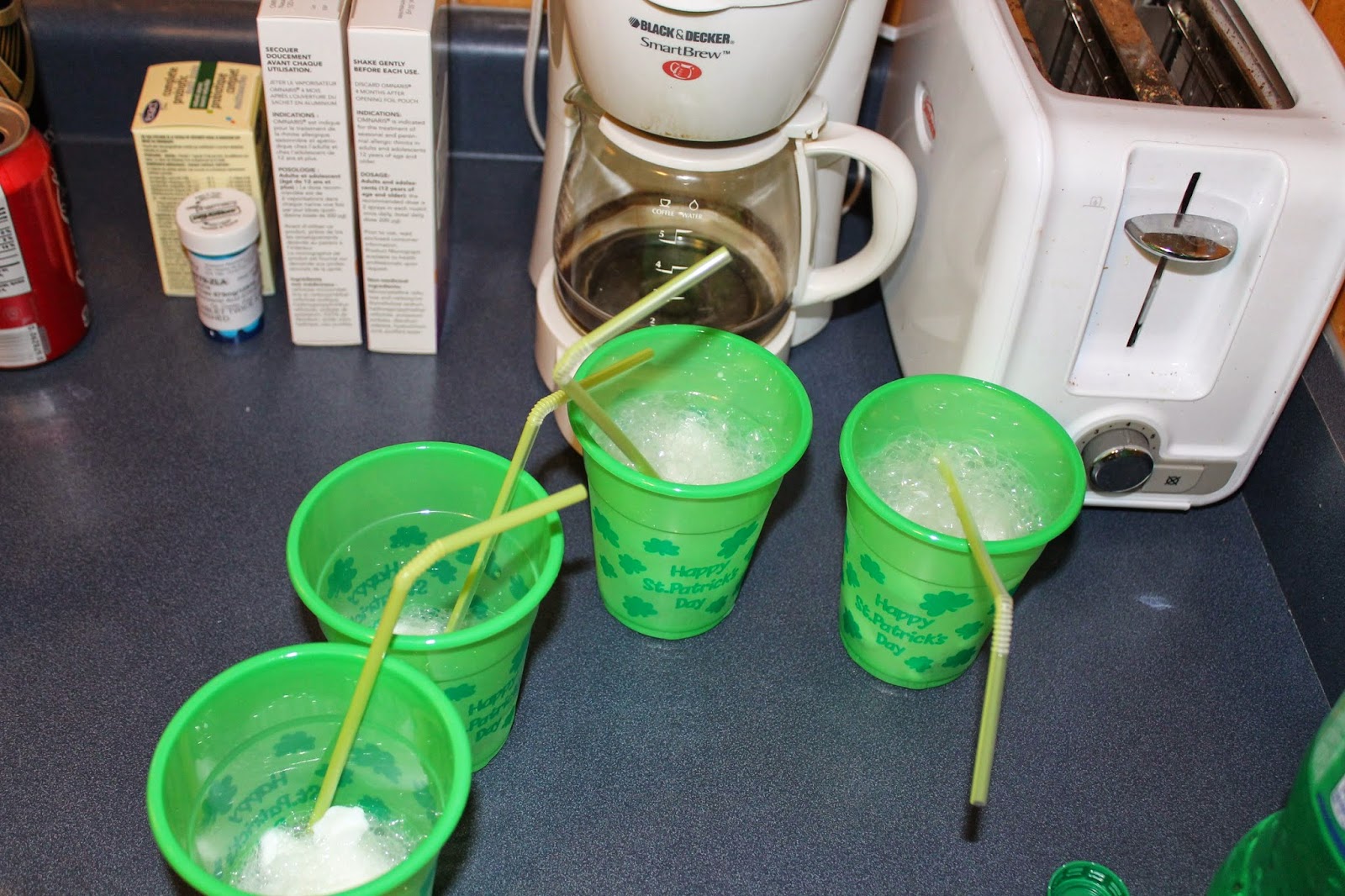 And then it was time to eat. You can tell that Rachel is all about her float! 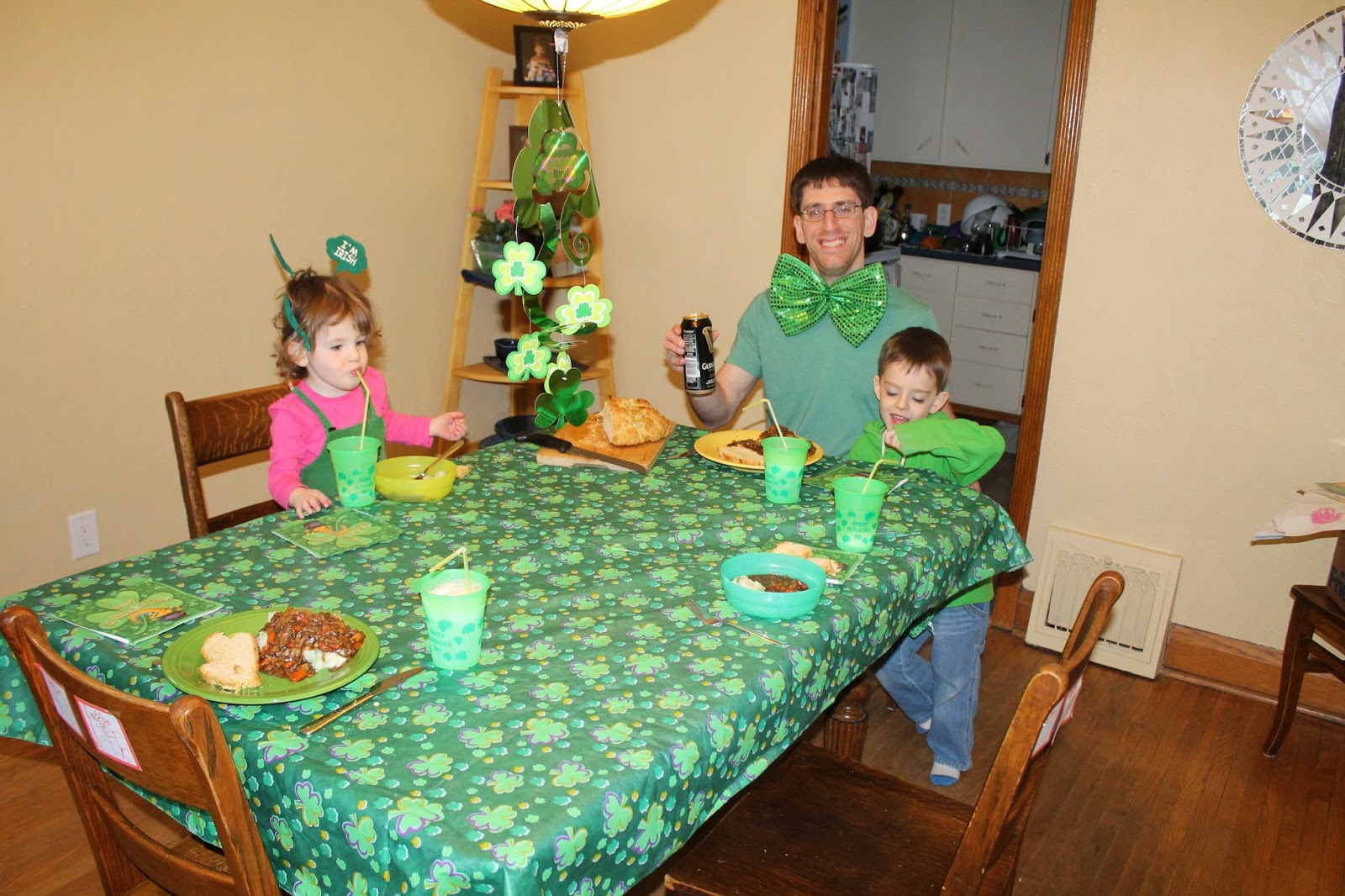 As a part of dessert I needed to whip some cream but, me being me, I hadn't read the recipe all the way through so when it called for "heavy cream" I assumed 18% was heavy enough. The cream was used in two different places in the recipe, and the first time I didn't need to whip it. After five minutes of whipping the table cream with no discernible difference, I called my mom. Then I sent Dave to the store for whipping cream and things went much better. Lesson learned. 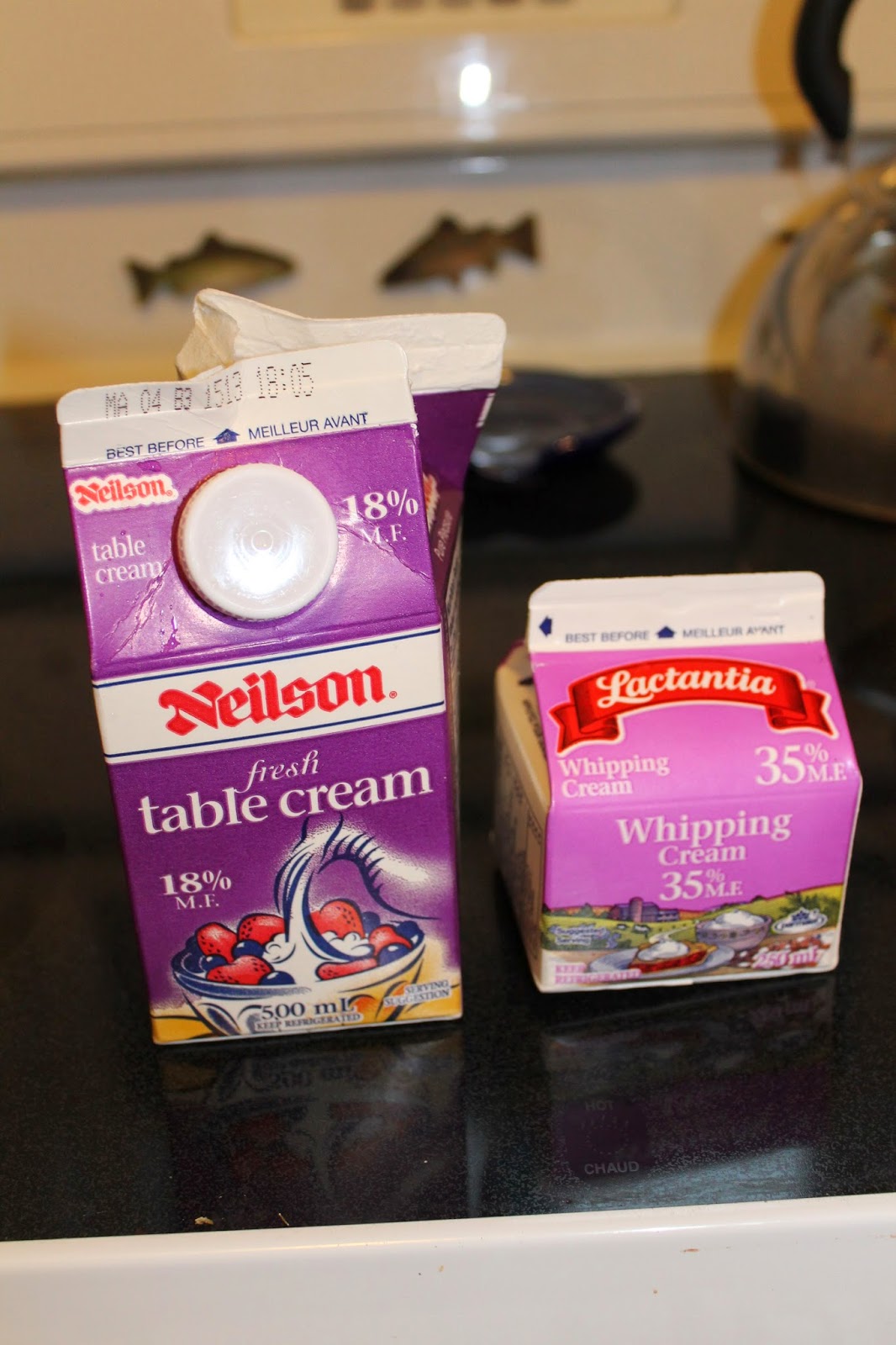 The other lesson we learned is that while these Guinness Chocolate Puddings seem like a really fun idea, they were a lot of work (I made a Guinness reduction), and then they were really rich. So Sam and Rachel ate the whipped cream (which I didn't flavour for them) and a bit of the pudding. I ended up giving a bunch of my whipped cream to Dave and then ate about three bites of pudding. Sadly a lot of this dessert ended up in food waste. It is super-rich and was just way too much after our filling meal. And the whipped cream with Guinness just ended up tasting a lot like Guinness foam. However I do think that they ended up looking somewhat like glasses of Guinness so that was fun! 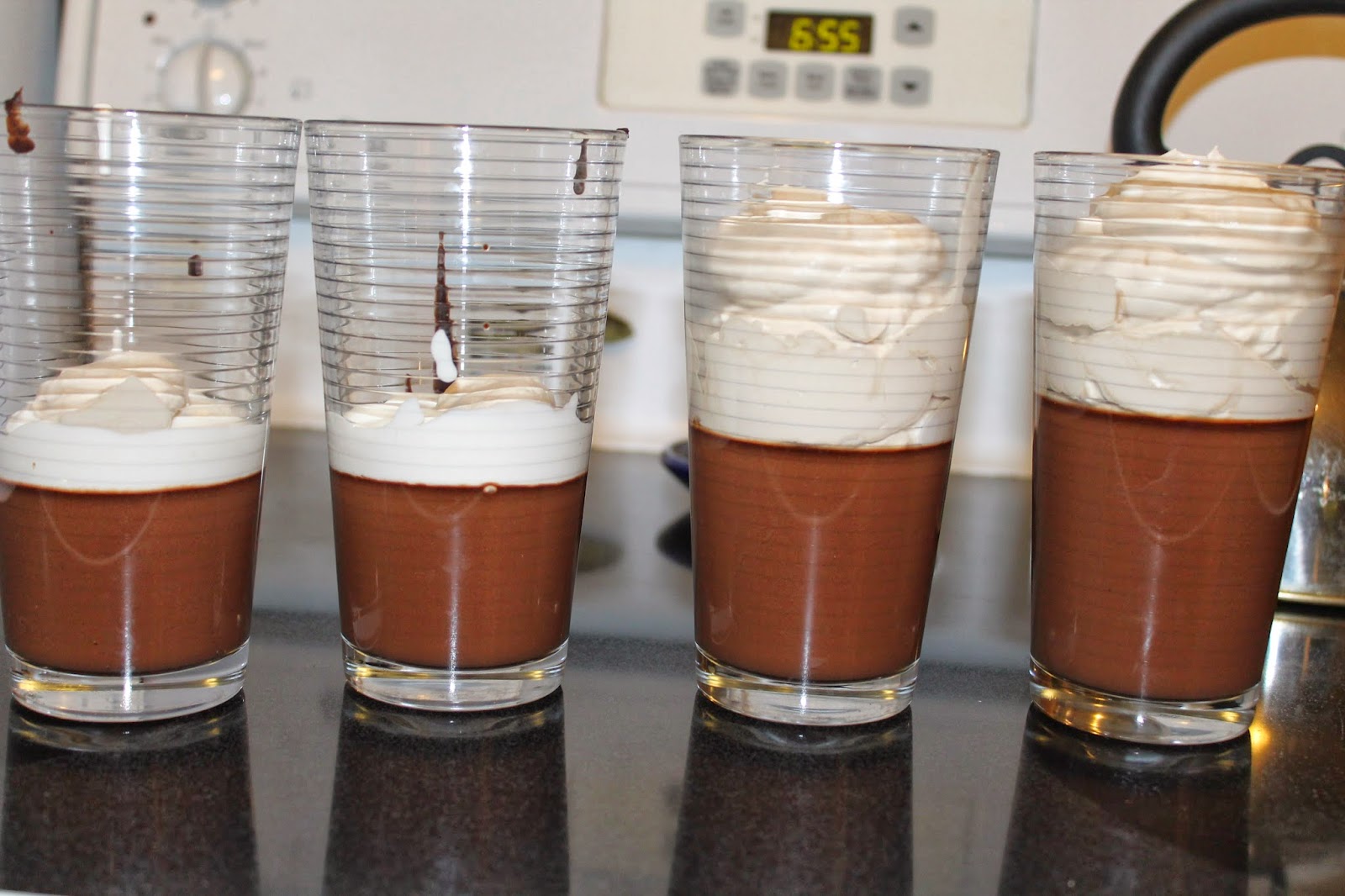 Overall, I really enjoyed our Irish inspired meal. And it was fun to spend almost a whole afternoon cooking and baking. That might have been my favourite part. I really hope that next year we are all healthy and can celebrate St Patrick's Day on the actual day. Although I'm thinking of just renaming it Irish Day as we really just use it as an excuse to listen to Irish music and eat (mostly) yummy Irish food!
Posted by Natasha at 07:09

Labels: Celebrating Holidays, Pinterest Projects, We Are Healthy (Or Not), Yummy food