Show Us Your Life - Appetizers

Today Kelly is doing appetizers and I have to say I LOVE appetizers. In fact I could eat a whole meal of just appetizers. I have a ton of favourites but I would have to say my all time favourite one is 7 layer dip. One year for our New Year's Party we had everyone bring an appetizer and we had three different 7 layer dips and that's all I ate all night! I couldn't find any pictures of ones I had made so I had to steal the above picture from here. But I have to say I love the artisticness of it. I could never be that arty!

There are tons of recipes out there but I basically mix 1 package of softened cream cheese (about 1/2 lb) with 1 cup of sour cream and 1 package of taco seasoning. Then I cover it with salsa and Dave's homemade guacamole (recipe below). Then I cover the top with shredded cheddar cheese. (If I'm feeling lazy I stop there -- but I know that's not really 7 layers.) If I'm feeling fancy (or I have time) I chop tomatoes and green onions to put on top. I've also had it with a layer of black olives, a layer of beans and/or a layer of meat (but I'm vegetarian so I find those ones disappointing now since I can't eat them.) The beauty of this dip is that it's really good and you can put as much or as little effort into it as you want. 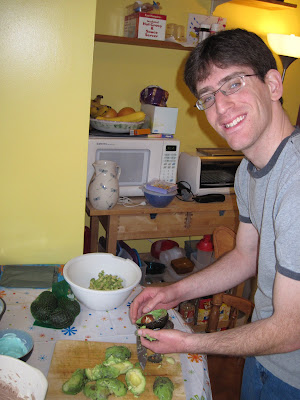 Dave's guacamole recipe is from Canadian Living and you'd have to check with him for the exact recipe because I can't find it right now but I think it's 5 avocados chopped in large chunks, 1 tomato (also in large chunks), 1/2 red onion finely chopped, and the juice from 1 lime. Mix together and serve. (I think you can also add some chopped jalapeno pepper but he always leaves that out because I don't like spice.) This is a really good guacamole because it's all large chunks instead of a smooth one.

Again, I don't have a picture of the finished product but the picture above is of Dave making it for Sam's second birthday party. You can also eat the guacamole on its own which is also good. And we eat both of these things with nacho chips. Yum!

And now I'm going to check out the rest of the appetizers because, as I may have mentioned once or twice, I LOVE appetizers!
Posted by Unknown at 12:22