Day In The Life -- Saturday

I woke up at 7:00 today. I had planned to go to the gym but Rachel was awake and Dave wasn't feeling great so Rachel and I hung out downstairs. I checked computer and financial stuff and Rachel played with the recycling. I told her if she wasn't so cute I'd be mad about being awake so early on a Saturday :) Ha ha ha! 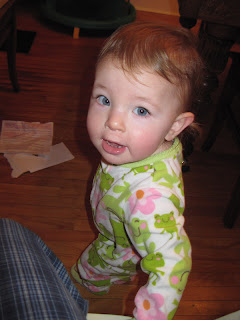 At 7:45 I fed Rachel breakfast and then put away clean dishes and washed the dirty ones. By 8:30 I was eating my breakfast of coffee/hot chocolate, a bagel and yogurt while discussing some things with Dave. We rarely have time to talk about in depth subjects these days so that was nice. 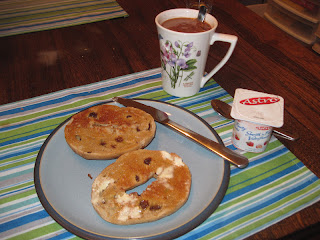 At 9:00 I was playing the Hat Game with Rachel, who decided I didn't play it right, and getting Sam breakfast. Later today Dave took a video of Sam and Rachel playing The Hat Game which I am sharing so you can see what this infamous game is all about. And seriously, it keeps the kids entertained for upwards of an hour at a time. Amazing! At 9:30 I was able to take a shower. It was nice to relax a bit more this morning. 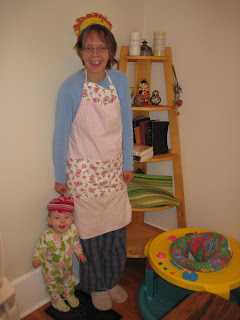 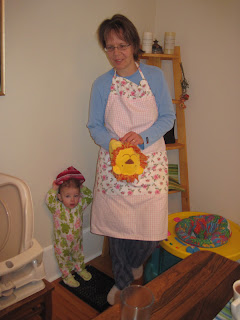 At 10:00 I got Sam dressed and I actually had time to send some e-mails while Sam and Rachel were playing in Sam's room. We were running early which NEVER happens (As Dave commented, "Who is this family and what happened to ours?!") Right before we left for synagogue, Dave went to get the kids and made me come upstairs. This is what I found: 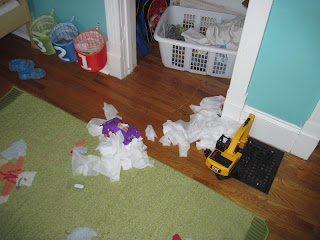 Yes, that would be most of a package of wipes which Miss Rachel had pulled out. sigh. We went to Tot Shabbat at the synagogue for 10:45. Sam learned about Havdallah and Rachel and I participated in the Torah reading portion of the service.At noon, as we were leaving the synagogue, I saw the travel mug I had left there last week. Dave and I had been looking for it all morning AND I had gone to the synagogue on Tuesday to try and find it. I think someone put it back in the same spot I'd left it last week, but they only put it back there today because it wasn't there on Tuesday. Anyways, we were very happy to have the mug back. We ran some errands before we went home -- getting gas, getting Dave a new shirt and me some new pjs at Mark's Work Wearhouse and I bought some things at Shoppers. We also stopped for some groceries at Zehrs where the kids got cookies. 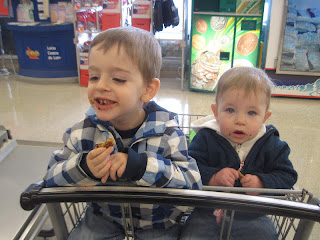 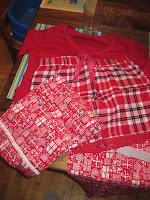 By 1:45 we were at home and having leftovers for lunch. Rachel went down for nap, Sam went down for (not so quiet) quiet time and by 2:15 I was processing the third (and final) pumpkin to freeze! Yay! I also cooked some rice for supper. 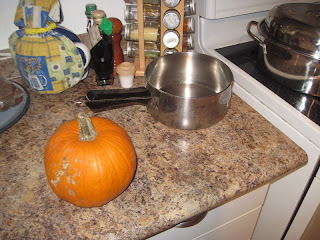 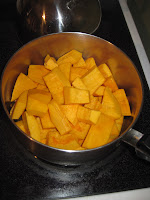 By 3:00 I was reading and drinking a Coke in the rocking chair, which was out of place because Dave was cleaning the living room and front entryway -- the two places I didn't get a chance to clean yesterday. I may also have eaten some Hallowe'en candy! Maybe... 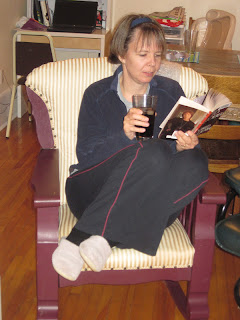 Around 3:45 I started making cabbage rolls for supper. We got a cabbage in one of our last CSA pickups and the only thing I could think of to do with it was to make cabbage rolls. So I got the recipe from my mom and went for it. I was a little nervous how they would turn out with veggie ground round instead of hamburger. And let me just say, making cabbage rolls is a lot of work! 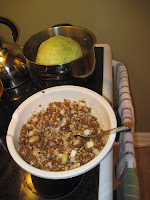 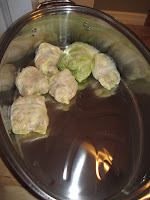 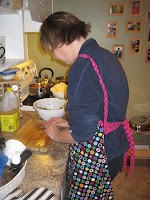 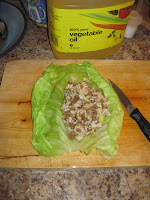 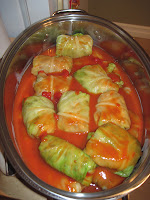 By 4:50 supper was in the oven and I got to go work out at the gym. I did my weight circuit and 20 minutes on the cross-trainer. It seems like a big deal but I've been a member for about three months and today was only my twelfth visit which is kind of sad since ideally I'd like to go three times a week. Oh well. As I left for the gym Rachel was freaking out about having a time out for playing with the cords. Again. 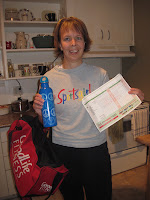 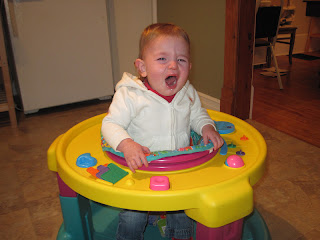 I was home by 6:15 and supper was just ready. The cabbage rolls were awesome, if I say so myself. Also pictured is Sam's block tower which he set up by Rachel's highchair last night and didn't want knocked down. So we had to get her highchair in and out of the corner without destroying these two creations. Thankfully Sam demolished them himself after supper tonight. 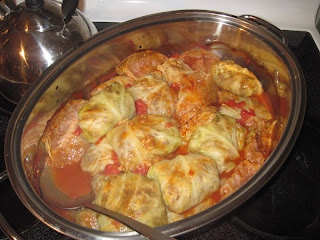 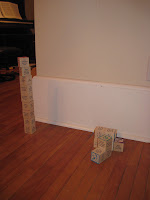 At 7:00 I was baking pumpkin muffins with Sam for his and my Sunday School snack tomorrow, as well as for our dessert for lunch. 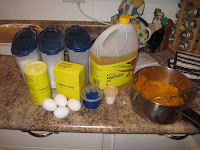 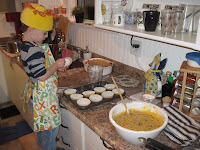 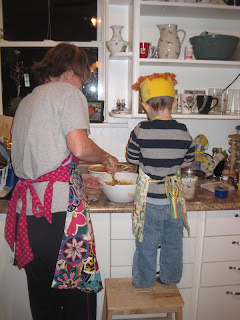 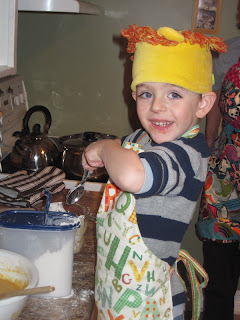 By around 8:00 I was cleaning up the kitchen, doing dishes, and licking spoons with Sam. Even Rachel got in on the action! 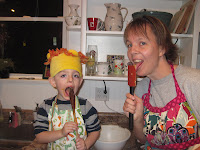 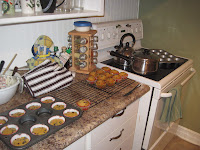 Around 8:15 we were having a muffin snack and I was totally laughing at Rachel as she was being a drama queen about not getting more muffins. She would point to the muffins, I would say "No!" and then she would cry. Then it would start all over again! 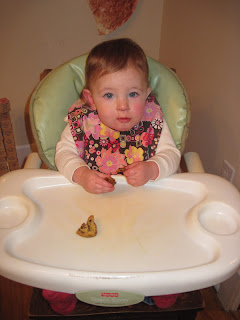 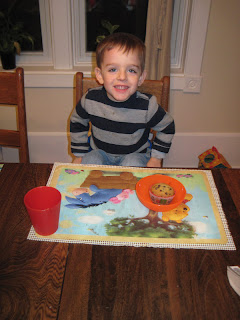 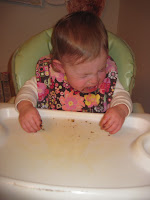 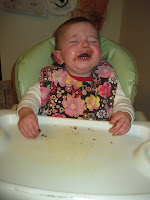 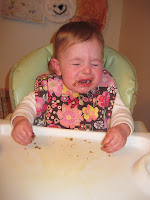 At 8:45 I realized that, while I have the snack I need to bring to Sunday School tomorrow, I didn't have a lesson plan yet so I did that while Dave and Sam cleaned up Sam's sticker mess. At 9:15 I tossed Sam into bed (not quite literally!), which was a bit abrupt but he wasn't listening so he lost his stories. By 9:30 I was drinking tea and watching an episode of "Modern Family" with Dave while the pictures for this post were uploading. Now I'm off to read and sleep for my extra hour of time tonight. It's been a full day!
Posted by Natasha at 23:07