When Sam started talking about his birthday, he wanted a Minecraft theme, but since I am one of those parents, I said, "No." I don't know much about Minecraft and wasn't feeling excited enough to try and plan a whole party around it. So I suggested an international theme (an idea I blatantly stole from Tim and Janice), which is what Willem had for his 8th birthday. Since Sam loves Willem and he also loves to travel, he was definitely on board, as it were!

Here is everywhere we "traveled" to. It looks like a lot of places because I couldn't figure out how to crop the picture so every country just showed up once.

After that we headed to Hawaii. We watched this video of a woman doing the limbo under a car. (You really should watch the first 45 seconds or so, as it's pretty amazing.) Then we tried the limbo ourselves. Since Dave and I were both holding the limbo stick, we have no pictures of this.

Then we headed out to Australia. First, however, we watched a video and learned a little about kangaroos. And what do you do when you're in Australia? You have kangaroo races! 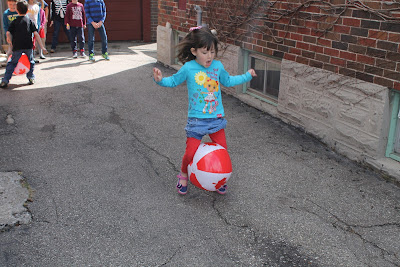 Note: Most of the pictures for this post are just of Rachel because I don't want to post pictures of Sam's friends and he was in the midst of them most of the time. 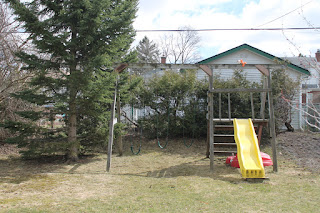 After Australia, we went on safari in Kenya. Can you spot the two animals hiding in the picture above? (There are actually three animals in this picture, but even I can't find the third one, and I know where it was!)

After Kenya, we traveled to France and visited a parfumerie. All of these containers were covered with foil and the kids had to guess what they were smelling. 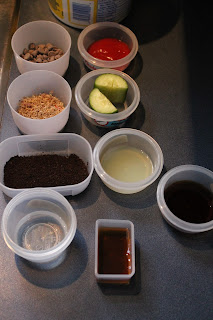 I had chocolate chips, pencil shavings, coffee (I was surprised how many kids guessed this correctly), vinegar, ketchup, cucumbers, lemon juice, and vanilla. Most of the kids thought the vanilla was maple syrup so then we had to do a sniff taste with that as well.

After France we went to China and transferred gummy worms from bowls to a Ziploc bag using chopsticks. And then it was time to eat. Sam was thrilled with his globe cake, although I wouldn't use it to teach world geography! Ha! 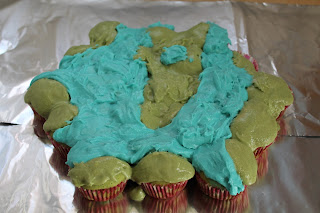 We kept the food really simple and enjoyed the cupcakes, chocolate croissants from France, and pineapple from Hawaii. 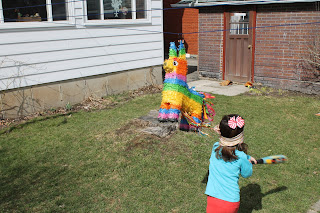 After we'd had a food break, we headed over to Mexico where we all got moustaches and swung at a pinata. (This is the point where I wish I could show you the group photo of all the kids wearing moustaches. It's hilarious!) 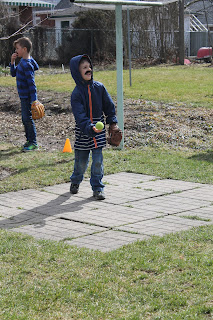 And then, because this is Sam, we ended up in the United States playing baseball! I just love our 8 year old, moustached pitcher!

As the kids traveled, they picked up various souvenirs for their suitcases. Each suitcase came with a flag pencil, a blow up ball with the Canadian flag on it, and two Ziploc bags. The two Ziploc bags were used in China (to transfer gummy worms into) and in Mexico (to store candy from the pinata). Here is the list of souvenirs each kid picked up along the way:

It totally made Dave and I laugh when, at the end, one of Sam's friends asked, "Do we get treat bags?" I guess he missed the point of the "suitcases!"

All in all, this was a really fun party and I think all the kids really enjoyed it. I know Sam did!
Posted by Natasha at 07:08