Climb Every Mountain (Or At Least One!)

We've been home for a few days now and I want to continue to share our stories from Kenya with you. Last week we didn't have great internet access for a few days and then we had a full couple of days in Nairobi, so I wasn't able to blog for a bit. But now I'm home and in between getting over jet lag (urgh), catching up on work, and ferrying the kids to and from VBS, I am hoping to find some time to blog. 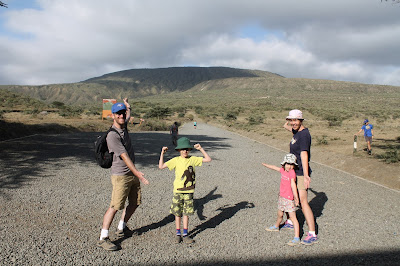 On June 30 Kurt and Carla decided it would be a good day to climb Mount Longonot. Mount Longonot is an inactive volcano and you can climb to the rim, and then from there we had the option to go to the peak, or around the rim. We got up and out early and by 8:40 we were ready to tackle the mountain behind us. Kurt and Carla estimated it would take about two hours to reach the top. 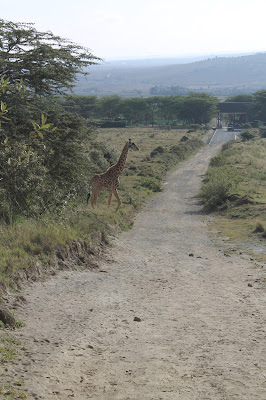 First a giraffe crossed the road. It never ceased to amaze me that animals we would only ever see in zoos here in North America freely wandered around everywhere in Kenya. 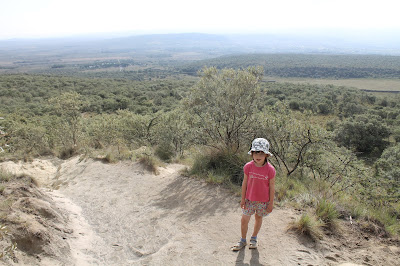 Rachel did fairly well considering how old she was but it did take a lot of...encouragement, shall we say... from Dave and I. 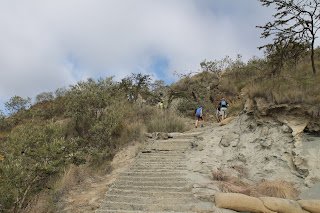 Sam's running shoes had gotten soaked in our Hell's Gate adventure a few days before and they had been drying outside for a few days. Unfortunately, the night before we climbed Mount Longonot I heard rain begin and realized his shoes were still outside. I rushed out to get them but it was too late. They were soaked. I was a little concerned about what he would wear the next day, but Kurt and Carla said he'd be fine in crocs. Any worries I had about Sam climbing a mountain in crocs were alleviated by the fact that about 98% of the time, he was zooming ahead of the rest of us up the mountain. 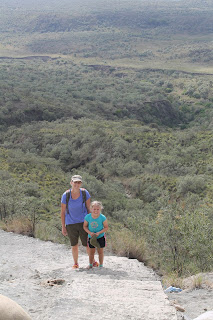 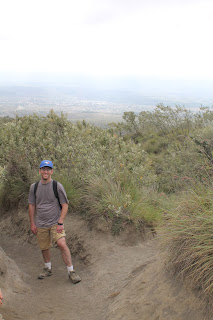 The views were gorgeous and the path was just dirt, with a few patches of cement "stairs," interspersed with sandbags, so that the mountain didn't erode too badly in the rain. 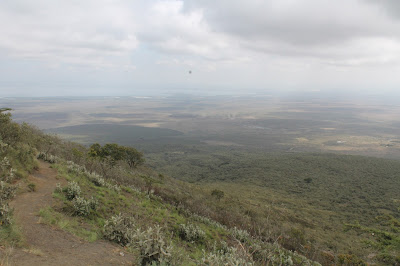 It's hard to see in this picture, but in the top third, towards the middle is a blurry land mass. That's Crescent Island where we'd lunched with giraffes the day before. Craziness! 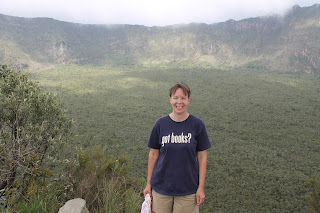 After about an hour and a half of climbing (my Fitbit got 136 floors), we reached the top. Yay! And by "top" I mean the crater. You can see that the crater was filled with trees and it was beautiful. And even though it was only about 10:15, we were more than ready for lunch. 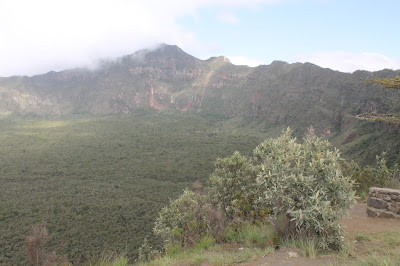 According to Kurt, it would only have been about another 45 minutes to the peak, which you can see in the middle of this picture. If we hadn't had Miss Rachel with us, I would have been happy to go to the peak. However, neither Dave nor I had it in us to "encourage" her any further up the mountain. And since the rim hike was another 7 kilometres, we decided to skip that as well. 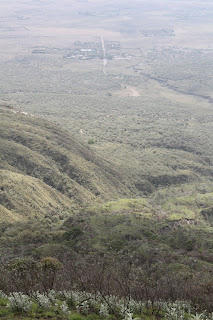 In the top of this picture, in the middle, you can see what looks like a small village, or something. That is the gate to the park, and where our vehicles were parked. We were a long way up! 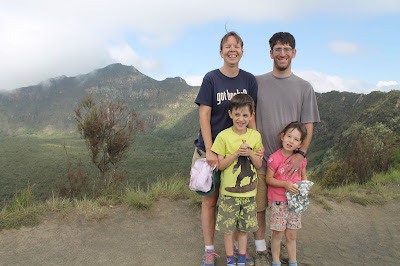 Our whole family at the rim. I was really proud of how well the kids did :) 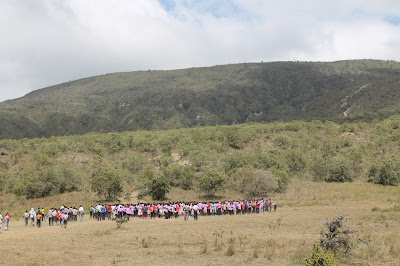 On the way down is when we started running into people. We had seen only about one or two other groups our whole way up. Supposedly schools bring groups of students to climb this mountain, but while we were well prepared with lots of water and fairly decent shoes, some of the kids we saw were in dress shoes, slip on flats, or flip flops. And a lot of them had drank all their water already. What was also interesting to note, is that for each group of fifty to one hundred students, there were maybe two or three adults supervising!

We probably passed about a thousand kids climbing down so it wasn't near as peaceful as the way up had been. And as much as I got a little frustrated "encouraging" Rachel to get up to the top, I was super thrilled to not have to be supervising thirty school kids. Ha! Plus a lot of them were saying, "If she (Rachel) can do it, then we can too!" so Rachel was thrilled to be an inspiration. 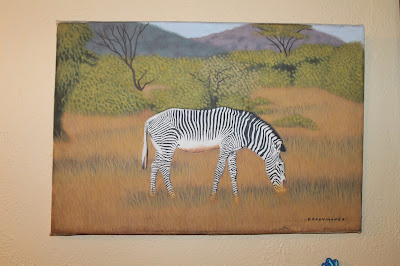 On the way home from Longonot, Kurt and Carla dropped Dave and I off at the local mall so we could have a date. We got some coffee from Java House (Kenyan Starbucks), and wandered around. And we bought this zebra painting to add to our travel wall. Then we came home and collapsed. Ha!